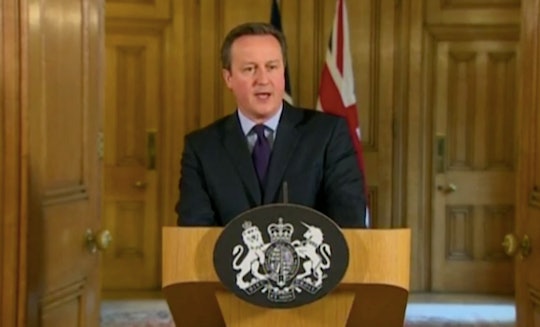 EARLIER: In the wake of the terrorist violence that struck the French capital Friday, on Saturday British Prime Minister David Cameron responded to the Paris attacks warning that British citizens may be among the victims, expressing condolences to the French people, and describing the measures being taken to protect the UK from any similar threats. In a statement made from Downing Street, he said, "We must be prepared for a number of British casualties," he told reporters, according to the BBC. Cameron said the UK terror threat level is staying at "severe" but that the level would be reviewed in light of the attack. Police presence at UK ports will increase. He called ISIS, who claimed responsibility for the attacks, an "evolving" threat.

Cameron also said that the UK's Foreign Office is "urgently investigating" whether any British citizens are among the Paris victims. He described himself as "shocked" by the events in Paris, which he describe as "the worst act of violence in France since the second World War." At least 120 people were killed Friday, according to reports. Cameron addressed the French people in his statement,

"Your values are our values. Your pain is our pain. Your fight is our fight. And together, we will defeat these terrorists."

The prime minister reiterated part of his address on Twitter:

The French portion of his message translates: "We are in solidarity with you. We are all together."