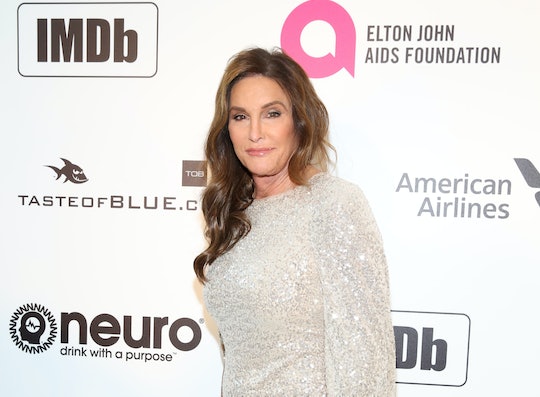 Aww, Caitlyn Jenner Had The Sweetest Things To Say About Kylie As A Mom

By taking one look at Kylie Jenner's Instagram account, it's safe to assume that she is a pretty amazing mom to her young daughter, Stormi. And according to the people that know her best, this is true. Caitlyn Jenner's comments about Kylie as a mom to Stormi are so sweet and speak so much to how she is in her role as "mom".

Caitlyn Jenner knows a thing or two about being a parent. She has a lot of kids and a lot of grandchildren — seven grandchildren, to be exact. She's seen her fair share of dirty diapers and screaming kids. So she is a fair judge of what a well behaved kid and good parent looks like. I mean, it takes one to know one. Caitlyn's youngest child, Kylie, has been a mom for more than year now, and she's proving to everyone that she is more than capable of holding her own as a parent. At least, that's what Caitlyn seems to think.

Caitlyn told Us Weekly that she has spent the most time with Kylie out of all of her kids, and thinks she is doing a great job as a parent. "Little Stormi is a wonderful little kid, [and Kylie] is a wonderful mom. She's totally dedicated to her."

There you have it. Kylie is a great parent — everything she posts on Instagram is not just for show.

Kylie is so dedicated to Stormi and her happiness and it shows. Her Instagram account is devoted to all of the little things that she does for her daughter. Kylie has held her daughter's hand when she was scared to go on the playground, watched her daughter dance to her own song (and didn't get mad when she would have rather listened to Travis Scott's music instead), and encouraged her to reach for the stars.

Needless to say, Kylie loves being a mom, and people can just read everything that she has said about motherhood to take her word for it. Caitlyn, on the other hand, loves being a grandparent. However, she told Us Weekly that she won't be changing diapers and getting her hands dirty like she used to when her kids were little. "I spent 34 years carpooling, so to be able to have a messy diaper and just...hand it back! It's a wonderful thing."

She has a point. But just because she is handing the diapers back to her own kids doesn't mean she isn't proud of all of their successes. Caitlyn has talked a lot about how proud she is of her kids and all that they have accomplished, including Kylie. Not only is Kylie a mom of one, but she also the head of a super successful cosmetics company, Kylie Cosmetics.

This July, Caitlyn posted a photo from Kylie's offices with the sweetest message that sang the praises of her daughter and all of her accomplishments. "20 years ago, when your mom and I were changing diapers, teaching you how to walk, and putting you to sleep, we had no idea this was coming. So proud," Caitlyn wrote.

Not only is Caitlyn in awe of her daughter as an accomplished business woman, but as a parent, too. But clearly Kylie had two amazing role models to look up to.