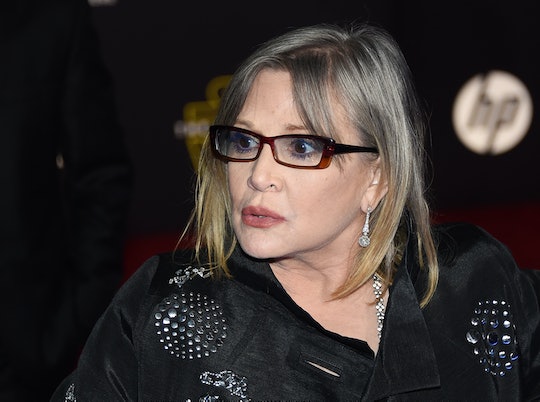 Most of us agree that 2016 has totally sucked. I was devastated to hear of Alan Rickman's passing in January, and watching Gene Wilder in Willy Wonka & the Chocolate Factory after he passed away in August was extremely bittersweet. And the woman I believed was going to be the first woman president lost the election to someone who was endorsed by white nationalists.

Somehow, though, it took losing Carrie Fisher for me to join in the chorus of 2016-haters. Carrie Fisher's death feels like a personal loss for me, because she was the first person I ever saw speak openly about struggles with mental illness.

Even before I struggled with my own mental illness, I regarded Fisher as a kind of hero. I'll never forget seeing her interview with Diane Sawyer, when she spoke so honestly about how her life had been ruled by manic and depressive episodes. She was open about how her illness had affected her, and she didn't prevaricate or make excuses for her behavior. There was no shame in the fact that she had abused a lot of drugs, and her struggles with addiction were just one facet of a disease that she had worked extremely hard to treat.

Carrie Fisher told the truth and she refused to hide her problems. She proudly stated that she wasn't ashamed for having a chemical imbalance. “I am mentally ill. I can say that. I am not ashamed of that," she told Sawyer at the time. "I survived that, I’m still surviving it, but bring it on. Better me than you.”

I'm sure that statement helped a lot of people who struggled with their own illnesses. It had a profound impact on me, even before I began having panic attacks in my early 20s, and even before my panic attacks gave way to agoraphobia and obsessive-compulsive disorder (OCD) and depression. When I did start suffering from my own particular chemical imbalance, I was afraid of many things: but being open and honest with my struggles was not one of them.

If Carrie Fisher could overcome psychosis and addiction, if she could treat and manage her bipolar disorder, if she could accept her imbalances and burdens, then I could reach out to friends and let them know the real reason I didn't want to meet them for dinner. I could ask for help from my family when I was struggling.

I'm so comfortable with sharing my difficulties, that I have been able to write about them and speak publicly about them as part of the inaugural cast of This Is My Brave, a show about mental illness. The idea of the show is to let people know they aren't alone in their struggles. Most importantly, the goal is to chip away at the stigma that still surrounds mental illness, as Fisher did.

There is a whole generation of people who are fighting to chip away at that stigma, and Carrie Fisher led the charge. I'm proud to belong to a generation that tears the doors off of closets. I'm even more proud of the fact that I was able to lay claim to my own struggles, to accept them as a part of who I am. And Fisher was always a role model for me in that.

If she could overcome psychosis and addiction, if she could treat and manage her bipolar disorder, if she could accept her imbalances and burdens, if she could do all these things and tell the world she was doing them, then I could surely share my own, much less dramatic, much less public story. I could reach out to friends and let them know the real reason I didn't want to meet them for dinner. I could ask for help from my family when I was struggling. And I could tell a room full of strangers all about the fact that I spent my early 20s fixated on an irrational fear of bathrooms.

So many of my fears centered around losing bodily control, and that can be sort of embarrassing to talk about. The mere thought of losing control sent me in a tailspin, an endless loop of catastrophizing and obsessing and avoiding. In sharing my struggles in a public forum, I felt like I was shedding the embarrassment about it. The more I talked about it, the easier it became. It became easier to talk about it, but also to live with it.

Losing Carrie Fisher is hard. It's sad to know that we've heard all we ever will from her. The mental health community lost a beautiful voice today. People with mental illnesses lost a great advocate. I know I'm not the only one who feels like they've lost a leader. But I'm proud that we can pick up her mantel and keep fighting stigma. I'm proud that she survived and even thrived with her illness. I am forever grateful to her for her honesty, her strength, and her grace.