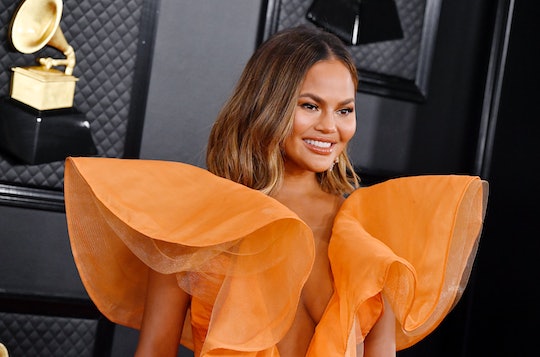 Chrissy Teigen has been criticized for painting her 3-year-old daughter's toenails, blasted for feeding her children ribs, and mom-shamed for sharing videos of her son Miles walking. It's truly absurd. So no one would blame her for sounding off on every nasty comment, but Teigen recently explained why she responds to some mom-shamers in an interview with TODAY, a decision she described as "tough."

This week, the Cravings author explained to TODAY that she gets called out for "pretty much everything" she does as a mom on social media, and she's not exaggerating. In the past, Teigen has been criticized for going on a date night with her husband after her daughter was born, going public with her IVF treatments, sharing a photo of her breastfeeding Miles as a baby along with a babydoll for Luna, and taking her daughter to the dentist "too late"... to name a few infuriating instances.

"If they get a glimpse of the car seat there is a lot of buckle talk," Teigen told TODAY when asked what she gets mom-shamed for. "Maybe for one half of a second, the strap slipped down. And TV is another big one. We have TV on a lot in my house. John and I work on television; we love watching television." Teigen also shared that whenever she shares "picture of [her kids] holding ribs or eating sausage," she gets "a lot of criticism" from vegans and vegetarians.

With so much negativity cropping up, anyone's mind would spin trying to handle it all, or even simply try to ignore it. But in her same interview with TODAY, Teigen explained why she sometimes decides to clap back — moments that are always hilarious and worthy of a slow clap when she does — and why sometimes she lets it slide. "It's tough," she told TODAY. "You want to be able to say more. Sometimes I'm like, 'I'm not in the right head space to deal with this. I have two kids. I've got other stuff going on.'"

Not only does Teigen have to decide if she even wants to respond to mom-shamers, she often has do some frustrating behind-the-scenes defense to protect herself and her kids. This past August, after she shared a video of Miles walking, she wrote in the comments that she has "to block like 20-30 people every time I post my kids. So many dummies. Is someone forcing you at gunpoint to be annoying?"

The mom of two pointed out to TODAY that she needs her mind to be "clear" when she responds to mom-shamers, and she's getting better at deciding when is the right time. But she's never worried about backlash; she just doesn't "want to deal with it." In a perfect world, she and so many other celeb moms wouldn't have to deal with any of it.