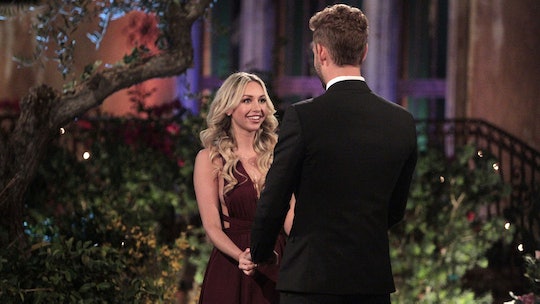 Corinne Is Living Large After 'The Bachelor'

One of the biggest stars of this Bachelor season has no doubt been Corinne Olympios. While so-called "villains" don't tend to make it very far along in this franchise — due to escalating friction with the other contestants or taking things a step too far and alienating the Bachelor/ette they're attempting to woo — the Miami native surprised everyone this year. I'd even go as far as to say that she's become a fan-favorite for many viewers, with hundreds of thousands of followers on social media and plenty of TV spots. But Corinne's Instagram after The Bachelor proves she's totally working her post-Bach place in the spotlight.

When fans last left Corinne, she'd come a noticeably long way since her constantly-interrupting and constantly-napping beginnings. At the start of the season, it was clear that the business owner had dialed her extreme personality up to 11 in order to make a name for herself on the show and stand out.

But by her hometown date, it was obvious that she'd developed real feelings for Nick Viall. She was very convincing when she told her father that she'd have no problem being the breadwinner if she and Nick did get married. They had a good time with her family, who honestly seemed like a ton of fun (despite her dad's momentary scariness with Nick). But most importantly, they had a super cute shopping date and Corinne confessed to Nick that she loves him in a surprisingly vulnerable and real moment. And, as Corinne said, he had "a really good reaction" to her love confession.

On the flip side, it's been fairly clear from Corinne's Instagram presence that she's not the one Nick eventually chooses as his wife-to-be. I'm not sure when Corinne gets eliminated. But if I had to guess, I would think she doesn't make it to the overnights — ironic, given that at first Nick's relationship with the youngest remaining contestant seemed purely physical. Luckily for the 24-year-old businesswoman, since the show wrapped filming, Corinne has certainly been keeping herself busy.

She's Hanging Out With Her Family

Corinne posts plenty of pics with her sister, Taylor. The one above is during a shopping trip in NYC.

She's Meeting Up With Her Fellow Bachelor Contestants

And going clubbing in Miami!

She's Focusing Her Attention On Modeling

Avid Bachelor fans already knew that, on top of running her dad's business, Corinne has been modeling (and appearing in music videos) for several years. She's been back at it since the show wrapped filming, if her Instagram is any indication.

She's Been Appearing On Talk Shows

#TeamCorn hit The Ellen DeGeneres Show, something Corinne was more than a little excited about.

Apparently, Corinne snagged an invite to OK! Magazine's pre-Oscars party at Nightingale Plaza, where she rubbed shoulders with actress Brytni Sarpy (who was apparently an old roommate of Corinne's) and got told she's pretty by Mario Lopez.

All in all, Corinne is clearly doing well for herself post-Bachelor and making it clear that she got something much more valuable than a husband out of her experience.