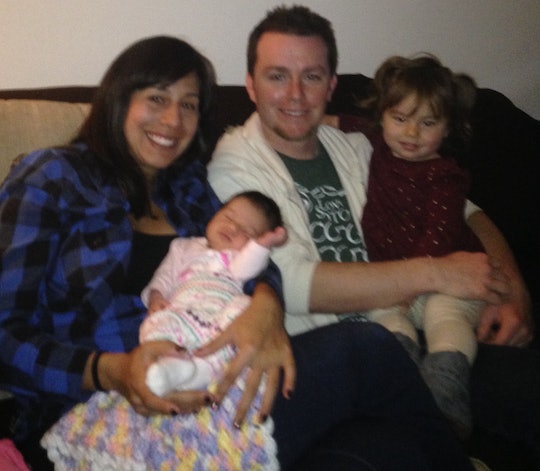 An Open Letter to My Husband After Kids

When I was pregnant four years ago, we fought a lot, and you once accused me of being hormonal. I was furious at you, but in retrospect, I have to admit that you were probably right. But that was only because we had tried so hard for so long to have a baby. Still, we made it. We overcame our infertility struggles, and you were right there beside me when the doctor said we were prime candidates for a successful IUI. You mixed the medication, administered the nightly shots in my stomach ,and held my hand when we found out it was a viable pregnancy. Yu dealt with my crazy pregnancy cravings, mood swings, and hot flashes, and you were the first one to hold our daughter when she was born. Then when we decided to have another baby, we did it all over again.

At the time, we thought that getting pregnant was the hardest part. Little did we know how much tougher things would get after that. There were so many ups and downs as we tried to navigate not only their emotions, but also ours. And I don’t think we realized just how much having kids would affect our marriage.

That first year as parents was really the hardest on our marriage. You were working long hours, and by the time you got home we were both exhausted. As a first-time mom, I was consumed with raising our daughter, and I felt like whenever I was home, I had to nurse her, set up playdates for her, and make her baby food. All of those responsibilities stressed me out, and I ended up taking out a lot of that stress on you. There was so much miscommunication that sometimes I felt like I was doing parenthood alone — and you, in turn, felt like I didn't appreciate you enough.

You are patient, supportive, creative, and you make our girls laugh like no one else can. They adore you, and that just makes me love you that much more.

Maintaining a marriage is really hard work after you have kids. Prior to having kids, we spent plenty of time together, and we rarely felt like we were not on the same page. If we did, all we needed to do was talk about it, and we'd get back on track. But with kids, working on your marriage is damn hard. Juggling the needs and wants of children and your spouse is exhausting. We didn't have time for a fancy night out, or even a foot massage as a gesture of appreciation; the most romantic thing we did for each other during that first year was help out with the dishes, or let the other person sleep when the baby woke up in the middle of the night.

We definitely fought over silly things during that first year. Remember that argument over which color we should use for our stroller? You wanted a neutral color,I wanted lavender. That was a ridiculous argument. But eventually, we started communicating and giving each other what we needed. We made it through that first year, and when we decided to have a second child, we knew what to expect, so we were better prepared for round two. We were better able to gauge each other’s emotions. For instance, if one of us had not gotten enough sleep the night before, then that was not the day to try and put the toddler bed together, because we knew we’d end up fighting the whole time.

As long as we continue to be kind to each other, support each other, and be willing to say "I’m sorry" when we f*ck up, I know we'll be OK.

Now that our daughters are 2 ½ and 4, we are in a much better place than we were after the birth of our first daughter, and I believe our relationship is much stronger now. Of course, there are still time when we feel disconnected from each other as we get caught up in day-to-day activities and responsibilities, but now we make sure to set time aside to do the things we love, both together and by ourselves. We’ve even managed to spend weekends away from the kids. And as much as I loved you before having kids, I love you even more now, because you are such an amazing dad. You are patient, supportive, creative, and you make our girls laugh like no one else can. They adore you, and that just makes me love you that much more.

As long as we continue to be kind to each other, support each other, and be willing to say "I’m sorry" when we f*ck up, I know we'll be OK. Our marriage is not perfect, and it never will be, but I believe that we are much stronger now, and I have faith that we are going to make it. We might hit a few bumps along the road, but I’m positive that we are still the couple we were before we had kids, and that we were totally made for each other.

More Like This
Here’s Why You & Your Mom Can Fight So Much
140 Quotes About Love To Make You Swoon
71 Instagram Captions About Love, Because It's All You Need
32 Sexy Games For Couples
What Parents Are Talking About — Delivered Straight To Your Inbox