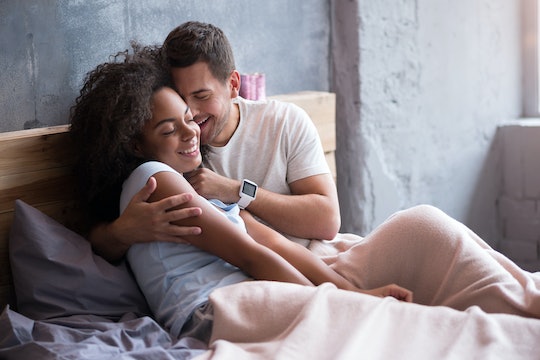 Marriage Doesn't Mean You Have To Have Sex Whenever Your Spouse Wants, & Here's Why

In any given day, the pressures of parenting, your job, and just, well, life can feel a little overwhelming. So much so that crawling into bed might be the only thing that sounds doable. But what about when all you want is sleep and your partner has something else in mind? Some women wonder: Do I have to have sex with my spouse every time they ask? It can feel like an obligation, especially with all the societal pressure surrounding sex and marriage.

But the answer is pretty simple — no. "Even in marriage, no one is obligated to have sex with another person," Jonathan Bennett, a certified counselor in Columbus, Ohio and creator of The Popular Man, tells Romper. "Every individual retains ultimate control over his or her body, even within the marriage bond. Just because a person is married doesn’t mean he or she has the 'right' to have sex at any time."

Dr. Charlynn Ruan, a licensed clinical psychologist at Thrive Psychology, agrees, giving the question an "absolutely not — for a myriad of reasons." She tells Romper, "First, reverse the roles here: would you want to have sex with someone who was just doing it out of obligation? That creates a terrible dynamic of resentment and hurt. Second, you may have legitimate reasons for not wanting sex right now. If you find that you are never in the mood and there are no medical reasons behind it, look at the other dynamics in place in your life."

Ruan explains that it's not uncommon for women to go through a low in their sex drive when they have young kids or are trying to build their career. "You might be exhausted, stressed, and overwhelmed," she says. "If that is the case, have a frank conversation with your spouse about how this is impacting your sex drive — and overall well-being — and see if you two can reassign tasks or get some help so you can get your mojo back. A sensitive partner will likely be receptive to this because it makes the sex conversation less personal and they are less likely to feel rejected and powerless."

Bennett says it's also important to keep in mind that sexual expression is an important part of any marriage and rejecting your partner on a regular basis could lead to frustration on his part and long-term damage to the relationship. "So, if you’re constantly turning your partner down for sex, it’s definitely worth exploring why you’re rarely in the mood," he says.

Of course, if you do need to turn down your partner for sex, Bennett recommends doing it with empathy and authenticity in order to keep your partner from automatically assuming you’re turning them down because they don’t turn you on or they aren’t attractive. "Realize that being rejected for sex can bruise your partner’s ego, especially if it happens a lot," he says, adding that it's important to be respectful and "never act snide or dismissive when turning them down."

Instead, Bennett says, it's important to be honest and not make excuses. That means forgoing the “I have a headache” stereotype and fess up to the real reason you're not in the mood— unless, of course, you really have a headache. "If you’re not feeling it, are too tired, had a stressful day, or anything else, be upfront and specific," he says.

It doesn't hurt to also throw in a few compliments when you are turning your partner down, Bennett says, like saying that you think they are sexy, but tonight you just don’t have the energy. "Let them know that the kids were too much today, but you can’t wait to be passionate later in the week," he says. "By giving them a reason to feel good about themselves, it’ll soften the blow of rejection."

Ruan says different sex drive levels can also call for compromise, especially in an instance where one partner wants more sex than the other. "See if there are things that will help you two meet in the middle," she says. "More foreplay, more romance, and changing up locations can all help. Scheduling in a couple nights a week for sex and romance can also take the pressure off because you both know it is coming and can plan. But, you need to be on board with the schedule or it will feel pressured."

And who wants to feel stressed about sex, right?