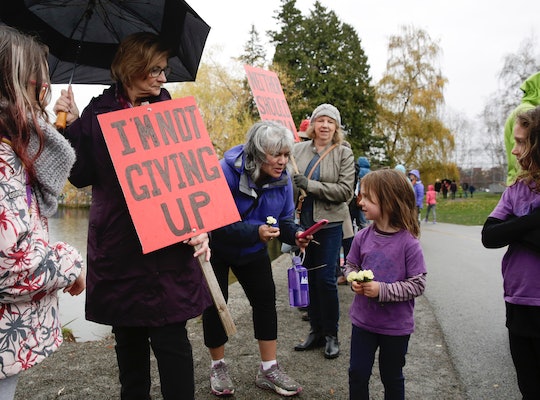 The upcoming Women's March on Washington will attract a projected 200,000 people to "reaffirm the core American values of freedom and democracy" at the nation's capital. And in addition to sending a strong message to the incoming presidential administration about the expectation that it protect the rights of women, immigrants, workers, LGBTQ Americans, and more, the massive gathering — USA Today even called its anticipated size "unprecedented" — presents some major logistical hurdles on the day after Donald Trump's inauguration. And although participants don't need to check in somewhere for the Women's March once they arrive at the intersection of Independence Avenue and Third Street SW in D.C. Jan. 21, their registering beforehand will be invaluable to event organizers and authorities.

While Trump himself has been confronted with a dearth of musical talent willing to perform when he takes the Oath of Office Friday and with lawmakers pledging not to attend on principle, interest in the next day's march has only swelled. With feminist icon Gloria Steinem having signed on as an honorary co-chair and celebrities like Katy Perry, Danielle Brooks, Cher, America Ferrera, Amy Schumer, and Constance Wu slated to attend, women and their allies are planning on flocking to the bold show of unity from all over the country, and even beyond. In fact, The Washington Post reported last week that organizers were seeking parking permits for 1,200 buses for the event — a full thousand more than would be needed on Inauguration Day.

That's a mind-boggling stat that underscores how important it is that participants communicate their intention to march. Luckily, that's super simple to do by just filling out a brief attendee questionnaire.

Of course, it's easy to get a feel for the enthusiasm surrounding the march from a quick perusal of social media, where fired up human rights advocates are spreading the word and announcing their dedication to the cause using the hashtags #WomensMarch, #WhyIMarch, and #IMarchFor. But those who have been ironing out all the specifics required to make Jan. 21 a successful and safe march in D.C. are hoping to pin down estimates that are as concrete as possible in order to "coordinate drop off locations, public transit, services/conveniences, and other aspects of 'day of' logistics with the relevant agencies in Washington, D.C. and contractors."

Simply put, they're really hoping they secure enough porta-potties to line the route to avoid major discomfort, among other unglamorous but crucial planning and security minutiae.

On the day of the march, activities officially kick off at 8 a.m. ET, and speakers music, and PSAs will commence an hour later. At 10 a.m. ET, the marchers will set off, arriving at endpoint near the Washington Monument on the National Mall at around 1 p.m. Simultaneously (or at around the same time, depending on time differences) local sister marches in all 50 states and at least 32 other countries will take place with the same goals in mind.

There may be means by which to sign up for those separate events (here's a list of all of them), but fill out the attendee questionnaire above only if you plan to travel to Washington. D.C. That way, organizers and city officials will know what additional tweaks to make to their preparations (the Metro system, for example, will run on an adapted scheduled with extra trains to accommodate the expected influx of people).

It takes a lot of heart, dedication, and passion to come out and extol the messages the marchers want to convey to the man who will soon be the brand-new president, the United States, an the world. It also requires intense preparation and planning. Registering beforehand helps to make that part a little easier, so the important political issues the Women's March aims to address can dominate the show on Saturday.