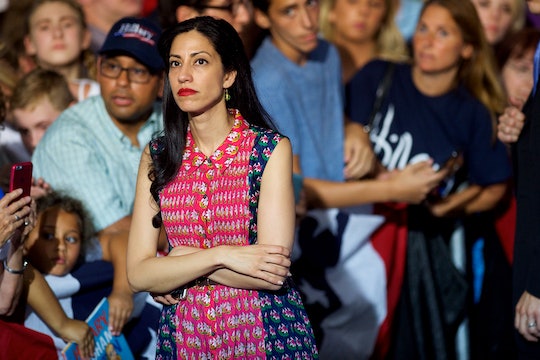 When a former reality television star and onetime owner of a worldwide network of beauty pageants is the Republican nominee for president, it may not be incredibly shocking that he'd opt to issue a statement about the dramatic dissolution of a high-profile marriage. Donald Trump, though, escalated his reaction this week after initially commenting on the "very wise" decision of Democratic opponent Hillary Clinton's top aide to separate from ex-congressman Anthony Weiner, who is again allegedly enmeshed in a salacious sexting scandal. If any presidential candidate in modern history besides Trump suggested Huma Abedin was connected to Islamic extremism, the reaction would be stunned and explosive. But considering his penchant for making bold, inflammatory, and reportedly false assertions, it's just another day in the life.

Abedin announced that she was dumping Weiner Monday, the day after The New York Post published an article exposing another round of his alleged virtual dalliances. "Huma is making a very wise decision," the official Trump reaction began. "I know Anthony Weiner well, and she will be far better off without him."

But later that day, Trump expanded on that sentiment when speaking with a conservation radio show host in Seattle on-air, ostensibly citing Abedin's involvement with a reputable Muslim academic journal as reason to further the right-ring conspiracy theory that she's involved with Muslim extremism. (Skip to 6:47 for the good stuff.)

Amid lauding Abedin for "finally" moving to end the marriage, lampooning Weiner as a "sick puppy," and questioning Clinton's judgment for having the spouse of such an "uncontrolled and uncontrollable" person working on her campaign, Trump reignited the made-up claim that Abedin is somehow related to or involved with a terrorist operative:

It appears that Trump is referring to the Journal of Muslim Minority Affairs, a peer-reviewed journal her father founded and of which she was listed as the assistant editor between 1996 and 2008. Although The New York Post defined it as "a radical Muslim publication that opposed women’s rights and blamed the US for 9/11," experts speaking with The Washington Post unanimously rejected that characterization. The Post's Fact Checker blog ultimately ruled that the idea that Abedin is affiliated with the Muslim Brotherhood was "bogus."

(Trump's team would not confirm or deny that he was talking about the journal during the radio interview, according to The Nation. Spokeswoman Hope Hicks said that he was not issuing an "accusation" about Abedin, but rather was making a "statement or a suggestion." Romper reached out to the Trump campaign but did not immediately hear back.)

But Trump's willingness to allegedly and publicly perpetuate a patently untrue theory is far, far from surprising. This is the man who led the charge of the birther movement against President Barack Obama years before he explicitly said that the president founded the terrorist organization ISIS. This is the guy who reacted to his drastic post-convention slide in the polls by claiming that the general election will be rigged against him, and then insinuated that "Second Amendment people" (i.e. gun owners) could deal with Hillary Clinton — a statement some interpreted to mean that he was encouraging Americans to assassinate her, or at least wantonly alluding to harming her, although his camp claimed otherwise.

This is the fear-monger who launched his campaign by calling Mexicans "rapists" and "criminals" and who has unabashedly called for the United States to indiscriminately ban all Muslims from entering the country.

This is a person who has allegedly had trouble separating fact from fiction, and who benefits by mentioning and perpetuating suspicions and divisions among Americans, seemingly in order to drive them further apart and amass votes. Donald Trump's alleged suggestion that Huma Abedin is connected to Islamic extremism during a painful time for her and her family is emblematic of an irresponsible M.O. It's dangerous when one of the most influential people in the country right now talks that way, but Trump seems incapable of running his presidential bid on little more than viral suggestions.