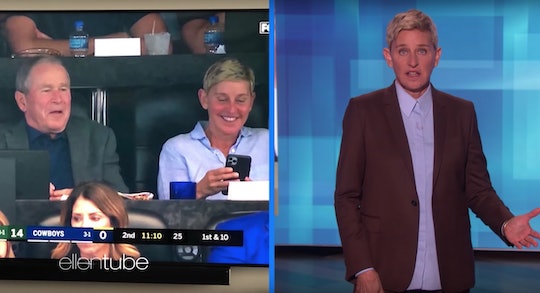 Ellen DeGeneres was criticized over the weekend. I know, I was surprised too. Who criticized arguably one of the most likable people in Hollywood or anywhere? A whole bunch of people on social media, apparently. DeGeneres and her wife Portia De Rossi were spotted at a Dallas Cowboys football game on Sunday, but it wasn't their attendance that had people getting all heated. It was the fact that DeGeneres was sitting next to a former Republican president, something that shocked fans considering DeGeneres' own political stance. Well, it turns out she's not having the criticism. And on Tuesday, DeGeneres defended sitting with George W. Bush with an inspiring and heartfelt message that should be shared far and wide. Because it turns out you don't have to agree with everything in a person's life in order to speak to them.

On Monday, DeGeneres opened her talk show by addressing some of the backlash she received after sitting with President Bush and his wife Laura during a football game between the Dallas Cowboys and the Green Bay Packers in Texas on Sunday. As she explained on her talk show, she and her wife had been invited by Dallas Cowboys' owner Jerry Jones' daughter Charlotte Jones to be guests in the suite, according to Page Six.

"When we were invited, I was aware I was going to be surrounded with people from very different views and beliefs — I'm not talking about politics. I was rooting for the Packers and get this — everybody in the Cowboys suite was rooting for the cowboys. I had to hide my cheese hat in Portia's purse," DeGeneres said.

One of the people in the suite with those different beliefs was Bush. And when she was photographed beside him, people took to Twitter to share their opinions.

DeGeneres is, as most people are aware, a Democrat and a self-described "gay Hollywood liberal" who would presumably be at odds with a Republican former president. But, as she went on to explain in her monologue, that doesn't mean the two can't be friends.

DeGeneres also went on to share some adorable behind-the-scenes footage from the game where she did a quick pan around of all the "fancy" people in the suite and of course the only one goofing around for the camera was her seat mate, George W. Bush.

The talk show concluded her monologue with a reminder that one of her frequently used messages to be "kind to each other" is about more than simply being kind to people whose belief system aligns with yours. "When I say be kind to one another, I don't mean only the people that think the same way that you do," she said. "I mean be kind to everyone — doesn't matter."

The world has become an especially divisive place in the past few years, particularly in the political realm. Lines have been drawn in the sand not just in the voting booth but also socially. And maybe DeGeneres is right. Maybe all this avoiding each other and carefully sticking with our own group is the wrong way to go about things. Maybe we should all just be kind to each other. I've heard worse advice, to be honest.