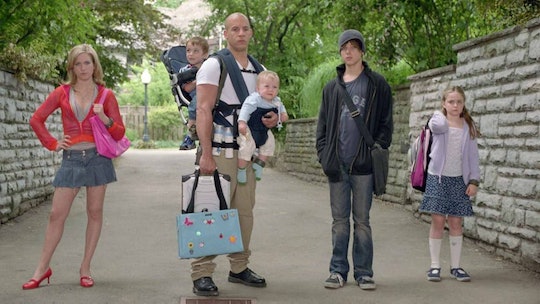 Why Are We Still Pretending Dads Have No Clue?

Dads deserve better onscreen. If a film or TV show even portrays family life (outside of plots to save the galaxy), the father characters tend to be completely clueless when it comes to parenting. From the lost soul of a father Adam Sandler plays in The Meyerowitz Stories (New and Selected), to all four father figures in Daddy’s Home 2, to Chip Gaines' half of the partnership behind Fixxer Upper, shows continue to perpetuate the bumbling dad stereotype that first brought big box office returns in 1983 with Mr. Mom.

You know the guy: Phil Dunphy in Modern Family, Steve Martin in Father Of The Bride, Sandler in Big Daddy, Mike Fleck in The Middle, Tom Selleck in Four Men And A Baby, Ross in Friends; you know him from Bridget Jones' Diary, Clueless, Meet The Fockers. If I were a dad, I’d be pretty pissed that nothing’s changed about the portrayal of fathers in the media in the last four decades — and it's not helping moms, either.

We do seem to have made some strides in complicating our ideas about what a mother is and can be — Charlize Theron gave life to a complicated, difficult character in Tully, but her husband, played by Ron Livingston in the film, was notable for being absent through her darkest moments, and hapless otherwise beneath his gaming headphones. The Florida Project asked audiences to answer whether a woman bending the law to survive poverty can be classified as a "good mother" — but father figures were absent, save Willem Dafoe's motel manager. Lady Bird saw Saoirse Ronan and Laurie Metcalf explode off the screen, and the dad do not too much. Otherwise, 2018 brought the return of John Goodman's Dan Connor in Roseanne — if only for a minute — proving that our appetite has barely changed regarding father characters in the interceding decades.

The idea that a human father is innocently ignorant when it comes to raising children is the low-hanging fruit of sitcoms and mid-budget comedies. Seth Rogen’s character in Knocked Up bumbles his way to the delivery room. Homer Simpson has been playing the fool in his own home since the premiere of the The Simpsons in the '90s. Even Randall Pearson, Sterling K. Brown’s Type A parent on This is Us, has to “learn” how to be a stay-at-home dad, since his wife pretty much took care of all the kids’ needs and it took a nervous breakdown for him to realize that maybe all work and no play makes him a bad dad.

It’s ingrained in me, and in our culture, to register a dad’s caring actions towards his children as off-the-charts adorable, and that’s because the bumbling dad stereotype has persisted for as long as it has.

We are too easily impressed with dads stepping up to be functional dads. I, like the rest of the internet, delighted in the video of “Ballerina Dad” rescuing his little girl from a bad case of stage fright, but I also know I wouldn’t have had as extreme a reaction if it was the mom who helped her kid through the performance. It’s ingrained in me, and in our culture, to register a dad’s caring actions towards his children as off-the-charts adorable, and that’s because the bumbling dad stereotype has persisted for as long as it has. We need to do better by fathers in the media by portraying them as the positive influences they mostly are.

There are the occasional outliers when it comes to fathers in the media. I delighted in this detergent ad where the dad knows exactly how to clean his daughter’s costumes without consulting a woman or fumbling with the washing machine settings. And we can look to Dre in Black-ish or Darryl in Crazy Ex-Girlfriend to give us hope.

But for the most part, dads in movies and TV are clueless about kids. They seem to have no instinct when it comes to caring about children, as in Three Men and a Baby, where it takes multiple grown men to figure out the workings of a disposable diaper. Or they are portrayed as benignly ignorant, the “fun” parent in charge of ice cream runs (Jack in This is Us), while the “responsible” parent (the mom) makes sure the kids are fed, clothed, prepared for school, and have brushed their teeth (which she wouldn’t have to come down on them so hard about if dear old dad hadn’t been taking them for ice cream so often).

Sometimes we’ll get a glimpse of a hands-on dad (Home Improvement's Tim Taylor was good at neither construction nor parenting), but it’s often framed as a survival story, or a thrilling adventure: Will Smith’s character fighting to provide for his son while homeless in Happyness, or Liam Neeson fighting to save his daughter’s life in Taken. Our culture appears to have only two settings for dads in the media: adorably daffy, or superhero. And both get fathers off the hook for requiring parenting skills. They just have to be well-intentioned or a trained assassin.

Jessica Alba’s retired spy character in Spy Kids: All the Time in the World, makes world-saving her side hustle, while also being a full-time mom of three. What’s the lesson here?

We, as a society, need to demand more from dad characters, if only to take the pressure off the put-upon “having it all” mom tropes in media. We need to get to a place where a dad, whom we see working and/or parenting, is unremarkable. As fun as it was to watch Vin Diesel’s macho Navy SEAL protect the lives of children (aka babysitting) in The Pacifier, we should expand past the myopic narrative that it takes an elite soldier to tend to the basic needs of some kids. If that were truly the case, our daycare providers would be compensated for the truly heroic work they are doing, instead of earning the pitifully low wages our culture assigns to those who take care of our most precious possessions, our children.

At the same time as dads bumble through life, Jessica Alba’s retired spy character in Spy Kids: All the Time in the World, makes world-saving her side hustle, while also being a full-time mom of three. What’s the lesson here? That moms are expected to be caring for their kids as their main M.O, and then work overtime (and in secret) to make sure the rest of the world is safe while dads are headlining as superheroes who then earn extra credit when they strap a kid in the baby carrier.

I’m staying optimistic, though. As the balance of parenting duties continues to shift between moms and dads, with more fathers taking on more of the childcare responsibilities these days than they did in the past, I hope we can see these changes reflected on our screens.

If Hollywood promises us an escape, then it must offer up something at least as good as reality — and that means recognizing the superheroes in homes across the country.

More Like This
Can Elderberry Help Prevent Illness In Kids? Doctors Weigh In
What Is RSV?
16 After-School Snacks For Hangry Kids
The Best Halloween Family Pajamas To Match Your Boos