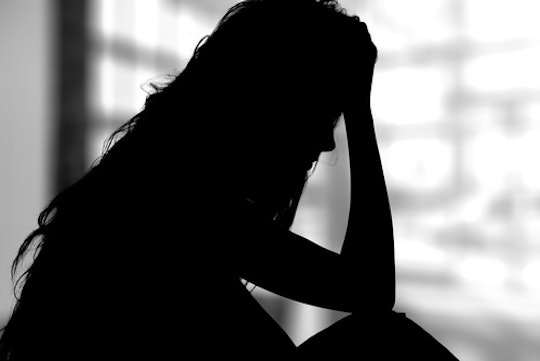 Under Trumpcare, Poor Women With PPD Are Screwed

Sofia* is a 32-year-old mother who started treatment for postpartum depression two months ago. “I started having symptoms when I was pregnant,” Sofia told Romper. “I felt very sad, but sometimes very angry too.”

She was particularly angry at her husband, because she already had two kids, and she didn’t want a third. “I could not stand him at times,” Sofia said. “I still have a lot of anger toward him.”

Sofia is unemployed, and both she and her husband are undocumented immigrants, which means her health care options are limited at best. She is enrolled in her state Women, Infants, and Children (WIC) program, which provides government-funded support for low-income mothers. When someone from the WIC program noticed that Sofia was struggling, they referred her to Emilia Ortega-Jara, a Southern California psychotherapist who started treating Sofia for PPD.

Ortega-Jara specializes in mental health services for Latinx families. She offers maternal mental health services at a reduced rate for low-income women and women without insurance. She’s also bilingual, which makes her services especially valuable in California, where an estimated 13.7 percent of the population speaks only Spanish. She is the only Spanish-speaking provider in her area. “I feel it’s my responsibility to provide my services to the community," she told Romper.

But now that House Republicans have passed the American Health Care Act (AHCA), the controversial bill that intends to repeal and replace Obamacare, Ortega-Jara is concerned that her services are in jeopardy. She's particularly concerned about AHCA's MacArthur Amendment, which would allow states to opt out of an Obamacare provision banning insurance companies from discriminating against people with pre-existing conditions. While there's no official list of what these conditions might entail as yet, there is widespread concern that insurers could dramatically raise premiums or refuse to cover low-income women like Sofia who struggle with postpartum depression.

According to the American Psychological Association, PPD affects up to 1 in 7 women who have just had children. Thanks in part to celebrities like Chrissy Teigen and Hayden Panettiere, who have spoken candidly about their struggles with PPD, there is an increasingly open and public dialogue about the condition.

Yet despite this heightened sense of awareness around PPD and other postpartum mental health issues, women like Sofia may not realize that they have PPD because they lack the resources or ability to receive a diagnosis, let alone treatment. This is particularly alarming in light of recent studies' findings that PPD rates are twice as high among low-income minority women.

“It can be very difficult to find psychiatric care without money or insurance,” Wendy N. Davis, executive director of Postpartum Support International (PSI) and a psychotherapist in Portland, Oregon, told Romper.

Research shows that living with the stress of poverty exacerbates postpartum depression and other perinatal mood disorders.

Even if women do have insurance, that doesn't necessarily mean they'll be able to afford treatment. “Sometimes even with insurance the deductible is high, so using it is still expensive,” Davis said.

With or without insurance, low-income women are often saddled with paying higher rates to get the support they need, which can lead to a devastating cycle of mental health problems. “Research shows that living with the stress of poverty exacerbates postpartum depression and other perinatal mood disorders [the term used to describe mental health issues during and after pregnancy],” Davis said.

“Depression and anxiety are stress-related conditions, so any increased stress increases your risk.”

If the AHCA becomes law, finding and paying for maternal mental health services will likely become a much more difficult process, especially for low-income women and women of color.

According to Postpartum Support International (PSI), more than 30% of Latinas in the United States and Mexico suffer from perinatal depression. One study by California State University San Marcos estimates that nearly 50% of Mexican-American women have PPD.

"When we look at all the barriers to screening and treatment for low-income women and women of color, it starts looking like systemic oppression. And that to me is a social justice issue.”

Ortega-Jara attributes the high rate of PPD among Latinas to "structural inequalities" that prevent low-income women of color from seeking the mental health support they need.

“Their immigration status, income level, education level, not having health insurance, and the discrimination and racism they experience are all contributing factors that exacerbate their PPD or PPA symptoms," she told Romper.

All of these roadblocks to diagnosis and treatment can turn a maternal mental health issue into something even bigger.

“Essentially, when we look at all the barriers to screening and treatment for low-income women and women of color, it starts looking like systemic oppression,” Ortega-Jara said. “And that to me is a social justice issue.”

"If we as mothers are not well, our family will suffer too.”

The Senate has yet to vote on the American Health Care Act, leaving the future of women like Sofia in the balance. For the time being, however, Sofia feels like her bi-weekly visits to Ortega-Jara's practice are a step in the right direction.

“It’s been helpful to talk about my feelings and learn new skills [in dealing] with my children and my husband,” Smith said. “We are the center of the family, and if we as mothers are not well, our family will suffer too.”

If you are suffering from postpartum depression or anxiety, please consult with a medical professional or contact the PSI support warmline at 1-800-944-4773.

*Name has been changed to allow subject to speak freely on private matters.

More Like This
Here’s What You Need To Know About That Viral 1960s Baby Formula “Recipe”
Gerber's New Spokesbaby Isa Has The Biggest Brown Eyes & Was Born With A Limb Difference
Abbot's Formula-Producing Plant Can Reopen In As Early As 2 Weeks — Now What?
Can You Help Your Baby’s Hair Grow?