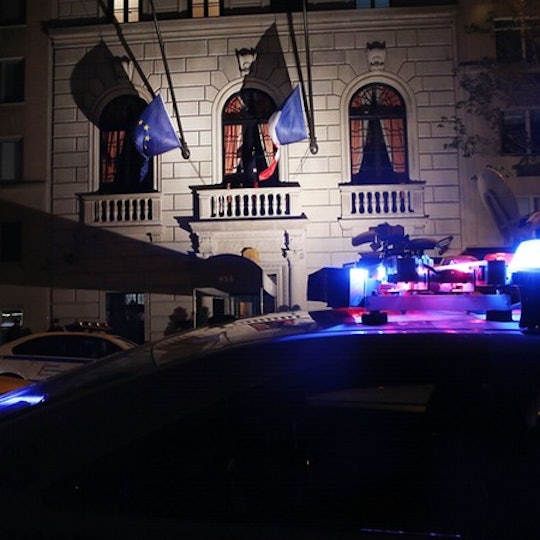 EARLIER: Following the deadly attack Friday that killed over 100 people, French police say that all the Paris terror attackers are dead. The attack, which began Friday night with at least six shootings and three explosions, was carried out over several locations, with attackers holding hundreds hostage in the Bataclan concert hall before killing over 100 attending the Eagles of Death Metal concert. Eyewitnesses on the scene described it as a "scene of carnage," according to The New York Times.

Despite reports trickling in over the last few hours, there are still a lot of unknown factors surrounding the attacks. Namely, who is responsible. Though officials are claiming all the assailants have been killed (two were confirmed killed in a siege on at Bataclan during the hostage situation, and two were reported to be suicide bombers), the motivations behind the attacks are still unknown. Though those watching the events unfold on the news are unaware of who would carry out the attacks, French President François Hollande, who was at the Stade de France watching France play Germany when the terrorist attacks began, said in a press conference, "We know where it comes from, who these criminals are, who these terrorists are."

But if officials know, they're staying silent, at least for now. World leaders, meanwhile, are speaking out against the attacks, with President Barack Obama rallying support from the U.S.

This is an attack on all of humanity and the universal values we share. We stand prepared and ready to provide whatever assistance the people of France need to respond.

Hollande has declared a state of emergency and closed France's borders following the attack.