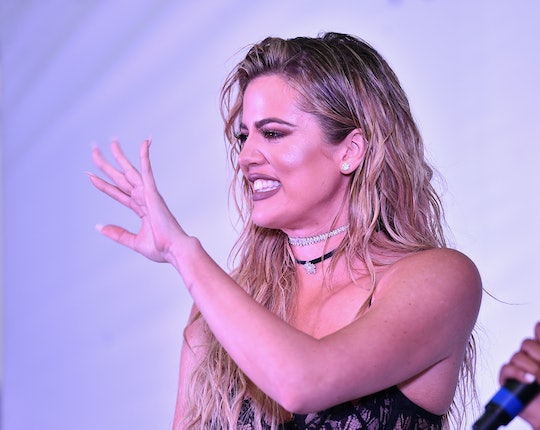 After months and months of waiting, the day has finally come! Khloé Kardashian is officially a mom and fans are so excited for her. Of course, the internet instantly sent off their happy wishes to the new mama (and not a short amount of protective well-wishes). But, because the internet does it so well, there were also plenty of hilarious reactions to Khloe Kardashian giving birth and they'll seriously make this blessed day just so much better.

Khloé gave birth to a baby girl on Thursday, April 12, according to TMZ, who reported the news. And with that news out in the open, fans everywhere collectively freaked out. After all, it's been a long journey, starting with Khloé officially announcing that she was expecting back in December, and ending with recent allegations about Thompson's behavior.

Now that she's reportedly given birth, in an admittedly less shocking manner than her sister Kylie Jenner did, fans are taking some time to get a little silly with their responses to Khloé giving birth to her daughter. And it makes sense, considering that the journey of Khloé's pregnancy has been definitely been a wild ride. So, here are all of the best warm-hearted and totally hilarious reactions to Khloé welcoming her first child with her boyfriend, NBA player Tristan Thompson.

Because Khloé has lived 10 years of her life in the public eye — on her family's hit TV show, Keeping Up With The Kardashians — many fans feel as though they're also just as much a part of this journey as the rest of her family. Can you blame them? Fans have seen Khloé go through a difficult divorce and have witnessed her desire to be mom for years as she played with her nieces and nephews. In fact, even before she gave birth, fans were already counting down the days until the news broke today.

When she first announced that she was expecting, Khloé explained to her followers on Instagram that she had been keeping it on the down-low for a reason and any parent-to-be can understand why. "I know we've been keeping this quiet but we wanted to enjoy this between our family and close friends as long as we could privately. To enjoy our first precious moments just us," she wrote back in December.

Since then, Khloé's social media feeds have all been abuzz with cute pictures and sweet updates about how she had been preparing to become a mom. For example, about a month before she gave birth, Khloé threw a lavish baby shower, complete with pink balloons and flowers. According to People, Khloé shower "was very over-the-top, but absolutely stunning. It was like a pink dream. There were pink flowers, including roses, everywhere."

And Khloé herself was overwhelmed with her shower. "Look at all the LOVE! From my mommy’s hand written Baby Thompson sign to each and every flower placed. Love was involved! I wish I could post every single picture! I’m still dreaming," she wrote on Instagram on March 11.

Then came the drama in early April, amid rumors that Thompson allegedly had not been faithful to her, reported by the Daily Mail and TMZ.

Of course, now that she's given birth, Khloé's Instagram feed will hopefully be filled with adorable photos of her new baby girl. But for now, it seems that Khloé and Thompson, and the entire Kardashian-Jenner family are just taking this time to take in little baby Thompson. And while it might seem like it's been a ridiculous amount of time since news of Khloé's pregnancy first broke, at least fans were given plenty of time to work on their best jokes, right?