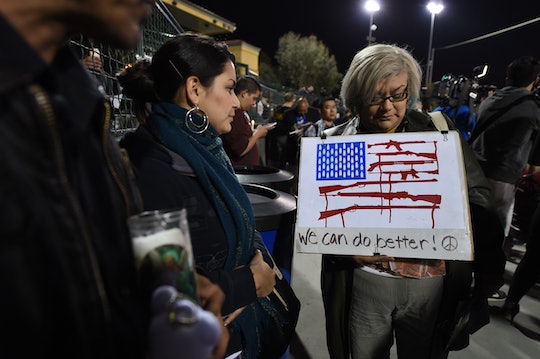 Graphic Photo Of Syed Farook Is Out There, But You Shouldn't Look

U.S. officials confirmed Friday that one of the two suspected attackers in the San Bernardino, California shootings, Tashfeen Malik, pledged allegiance to ISIS on Facebook. She made the post under a different name, supporting ISIS leader Abu Bakr al-Baghdadi, and it has since been removed by Facebook. But media has also been sharing more information on the other alleged Inland Regional Center shooter, specifically, the graphic picture of her husband, Syed Farook's death on a California road after a violent shoot-out with police officers. I won't be sharing the image here, because I don't think we should be looking at it.

Don't get me wrong. As someone who supports open media and honest-to-the-facts journalism, I do think images should be shared, even graphic ones. Though hard to watch, I did watch the video of Samuel DuBose's death — because amid statements from the officer involved saying he was dragged by the car and that he had no option but to shoot, I thought the easiest way to know what had happened was to watch what actually happened. It was difficult, but we do need to confront the reality of what's happening in the States — and one of the best things media can do is bring reality to light and share inarguable truths with readers.

When it comes to terrorism, though, media becomes harder to navigate. The same vehicle that works so well to help promote just causes works equally well when manipulated by organizations that want to promote fear. I believe that if it weren't for the media, terrorism would be far less effective. The Paris shootings wouldn't be influencing decisions to halt the acceptance of refugees — even though that's probably exactly what ISIS wants. If we accepted refugees with open arms, we fight against ISIS' legitimacy, rather than driving them back to the people who will accept them: ISIS.

So while — obviously — we need to cover happenings in the world, and terror attacks are part of that, let's leave graphic images out of it. We need to study terrorists, yes, to figure out what's driving them to ISIS and how we can stop them. Media can even be a boon: ISIS' campaign is drawing foreign fighters, but what if we can use media to create our own campaign, to target "fence-sitters" who can still be dissuaded? I think current articles that focus on the importance of accepting refugees are part of the solution, and there's more that can be done.

But let's not add fear to the frenzy. We can keep from sharing graphic images — after all, that's exactly what terrorists want us to do. Let's focus instead on the victims, their lives, and those they left behind. Let's look at the ways we can help, like talking to your congresspeople, advocating for stricter, safer gun laws, donating to the victims of the Inland Regional Center, and by donating to victims of gun violence throughout the country. Some might even be interested in learning how to protect themselves during a mass shooting, because that's become a legitimate fear for so many people.

It's not a solution, but it's a way to refuse terrorists the attention that powers their aims.