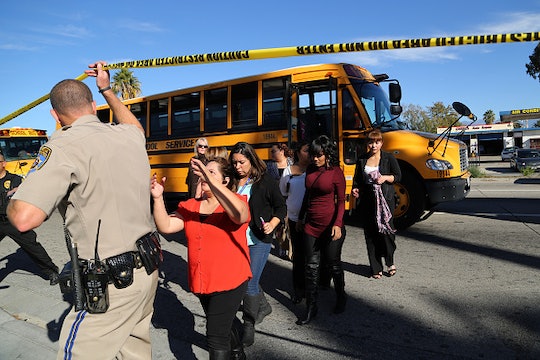 5 Ways To Pay Tribute To The San Bernardino Shooting Victims

Earlier: On Wednesday afternoon, a shooting occurred in San Bernardino, California at the Inland Regional Center. Since the initial reports began at 11:15 a.m. PST, 14 people have been killed and 17 more injured. Police reported that this incident was the work of three shooters, two of whom — including one woman — have been caught.

Now that police have apprehended two suspects, and could be closing on the third, it's time focus on the people who were affected most by this tragedy: the victims. As what happens after any tragedy, Americans are looking for ways to help and pay tribute to the victims of the San Bernardino shooting. And there are plenty of ways to do this that don't involve donating to a victims' fund.

Wednesday's events brought to light to very important issues facing the United States. The first being poor gun laws. The San Bernardino shooting was the 353rd mass shooting of 2015. And it took place in California, a state with strict gun laws. The fact that a tragedy of this magnitude occurred in a state with such rigid laws proves that Americans need to do more to change gun control laws and make that a priority for legislators.

The second issues is lack of resources for people with developmental disabilities. The shooting took place at the Inland Regional Center, a non-profit that helps individuals with developmental disabilities by providing a "service system that helps identify and eliminate barriers" for themselves and their families. It's heartbreaking that something to horrific had to occur at an organization that does so much good.

By further bringing these two issues to light, you can not only pay tribute to the San Bernardino victims, but create a change that the world so desperately needs. Here are just five ways you can honor those who lost their lives on Wednesday.