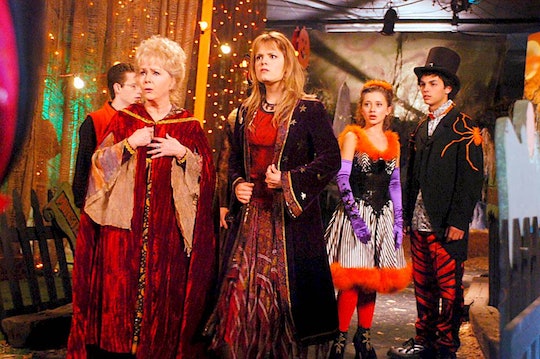 The internet is currently filled with celebrities paying tribute to Carrie Fisher and her mother Debbie Reynolds, two iconic actresses who unexpectedly passed away earlier this week, just a day apart. It's no surprise that so many of Fisher and Reynolds' fellow actors are coming out in droves to pay their respects to them. Each of the women had many beloved roles over their years in the industry, and so crossed paths with many other well-known names, who took to social media to honor them. But one of the most touching odes was Halloweentown actress Kimberly J. Brown's tribute to Reynolds.

Brown took to her official Facebook page last night to post an incredibly eloquent and heartfelt message to the 84-year-old Hollywood icon. Reynolds played Aggie Cromwell, the eccentric but beloved witch grandma to Brown's teen witch Marnie Piper in three of the four movies from the enormously popular '90s/00's Disney Channel Original Movie franchise, including Halloweentown, Halloweentown II: Kalabar's Revenge, and Halloweentown High. (Reynolds also appeared in 2006's Return to Halloweentown, the fourth and final film of the franchise, but Brown opted not to return for that film and Sara Paxton replaced her in the role.)

Brown, like hordes of Reynolds' other co-stars (including the entire cast of Will & Grace, who remembered the Singin' in the Rain actress as Grace's on-screen mother), mourned the loss of the woman who impacted her life both "professionally and personally" and who "lived her life like all of us should, to the fullest."

The tribute accompanied a behind-the-scenes photo from the filming of Halloweentown (ostensibly from Brown's personal collection). The younger actress lovingly described her on-screen grandma as someone who was "bold, funny, and had the biggest heart," echoing much of what's already been said about the much-adored Hollywood legend. In particular, Brown remembered Reynolds' smile, her humor, her wisdom, her caring, and how she'd go out of her way to help others.

"Her sparkly smile warmed every room she was in, and her jokes about her amazing career and life would make your stomach hurt with laughter. Making people happy through her performing was her favorite thing to do, and she showed me at a young age what a gift it is to be able to do that for people," Brown recalled. "She was so talented and wise, which easily could have gone to her head, but instead she went out of her way to help others shine as brightly as they could."

The former Halloweentown actress noted that Reynolds' "humility, grace, and care for others" inspired her as a teen and will stay with her, even after her co-star's death.

Brown wrapped up her tribute by recalling an iconic quote from the original Halloweentown movie, spoken by Reynolds' character. "'Being normal is vastly overrated' is a quote from 'Halloweentown,' and how fitting it is that [Reynolds'] character spoke it," Brown mused. "Her generosity, talent, and loving spirit made her anything but normal. Thanks for the magic, Debbie. Rest in peace."

The heartwarming tribute has since been shared over 26,000 times on Facebook. It's clear that working with Reynolds, a notoriously kind woman and someone who was, by all appearances, always a joy to work with, had a big impact on Brown. I hope that hearing these loving remembrances of Reynolds and Fisher (and knowing how adored they were) are some form of comfort to the Fisher and Lourd families (particularly 24-year-old Scream Queens actress Billie Lourd, who lost both a mother and a grandmother) in this difficult time.