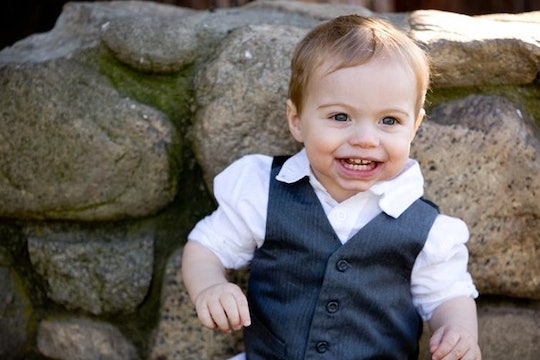 I've never understood people who feel like they know their baby right away. It's not that I doubt them, but after each of my two births I felt like the babies that were put in my arms were just beloved strangers. Most of the work (and most of the joy) of those early days was figuring those babies out, which happens quickly but is also a never-ending process. I've had some major "a-ha" moments as a mom, one being the birth of my daughter. In fact, having a second baby helped me see my first more clearly.

Even if you are someone who has an instant, knowing connection with your child the moment they're born, you still don't really know what you're doing or what's normal. It's why us new moms call the pediatrician multiple times a week the first few months, and why we're constantly Googling stuff that leads to Googling more stuff which leads to believing that everything is absolutely dire and you should have gone to the ER weeks ago. It's exhausting.

Generally, in time, we get a little better at this whole motherhood thing and slightly less paranoid. But through this time of learning and evolving, a first child becomes a de facto baseline for all children and childhood behavior, which makes sense, right? You've never spent this much time with (or energy on) a child before, so this one is showing you the parenting ropes.

My first baby, my son, was tough. I loved (and love!) being his mom, I loved who he was, but he was challenging. He was one of those babies who was more or less holding their head up as soon as they were born, eyes wide open, seemingly looking at everything he could see and do and get into. By 5 months he wanted to walk, but couldn't hold himself up, so my husband and I had to hold his little hands, bend down to 5-month-old height, and let him step along with our support (which destroys your back, by the way) until he began walking on his own three months later. Once he could move, he could not be left unattended for more than, literally, a few seconds before getting into something... for years.

He was extremely emotional and those emotions could change in the blink of an eye for no apparent reason. He was a frequent tantrum-thrower from an early age, but he was effusive in his positive emotions as well. He would cry at the sight of a particularly beautiful magnolia tree. He was in-tune with and responsive to other children's emotional needs. His sensitivity was as lovely as it could be trying.

Just as I learned that not every sort-of-perhaps-unusual blink required a trip to urgent care, I figured out that the intensity of a child's emotions was normal. My son remained my baseline — whatever he is is just how things go, I thought — and then my daughter was born.

Not every child couldn't wait to walk and explore, but he couldn't. Not every child had a deep compulsion to explore absolutely every corner and surface of anywhere he went, but he did.

I basically had the fundamentals down and, yes, that was unchanged from child to child. I knew that waking up every few hours to eat was normal. I knew that the puppy-sounding grunting was normal and not the sign of a breathing problem. I knew that, yes, breastfed infant poop really is that yellow and smells like bread and that's not weird or anything to worry about.

But then there were other things, especially as time went on, that I'd assumed were "normal" for my son that, actually, weren't.

The emotional volatility, the extreme physicality, the constantly needing to be watched? It's not that that wasn't normal — lots of kids display those same traits — but it wasn't a given in the way I assumed it was before I had anything to compare it to. My daughter was a much (much) chiller child. It's not that she showed me what normal "really" was. It's just that having her made me realize that the things I attributed to more or less inevitable child behavior in my son was, in fact, uniquely him, that the spectrum of normal was far broader than I'd imagined.

And you know what? That made me appreciate him so much more. It made me realize that some kids are just harder, and I wasn't doing anything to make him difficult. He just was. He just is. More profoundly, it made the aspects of his intense personality that were beautiful and fun even more so — they weren't some inevitability of nature. That was all him.

It also encouraged me. Because in realizing that, actually, these combination of traits are unique (if not exclusive) to him, I felt more empowered knowing that no one knew better than I did how to raise or respond to him and his needs. Not that I couldn't learn from other people or take their advice, but I realized that every parent operates from their own experiences with their own child and every child was different. So now I knew, clearer than ever before, that everyone who'd said, "You know what you should do..." was only giving their perspective. What would work with one kid would fail spectacularly with another.

I don't like to compare my children, but juxtaposing one to the other gave me a richer view, and love, of who they are.