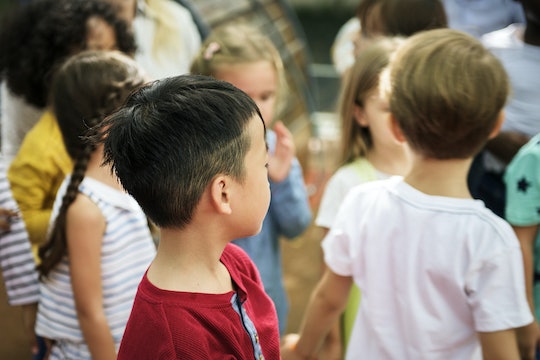 Here's What *Really* Happens When You Compare Your Kids

They say that comparison is the thief of joy, and that adage has never rung more true than in modern parenting. It seems that keeping up with the Joneses means making sure your kid is on par with Jones, Jr., and social media will ensure you're aware of every award and trophy. It's natural to do some comparing when it comes to our children, but at its current level, it's an unhealthy cultural practice. As it turns out, comparing your kid to other kids hurts parents just as much as it hurts children.

Nothing breeds comparison quite like two cousins born close together. I would know. My sister-in-law and I had the same due date. We were competing from the get-go over who would win Race to the First Grandchild 2015 (I "lost"). We compared their sizes when our fetuses became babies, my little peanut always smaller than her cousin. We watched carefully to see who would hit their milestones first — first tooth, first word, first steps. Now that the girls are 2, it's all about who can be potty trained first, who is more athletic and adventurous, and who is "voice activated." It's all in good fun, of course, until it isn't.

As luck and genetics would have it, my daughter has thus far been the slower of the two to develop. As much as I adore my niece, it honestly kills me to see my little girl "behind." It's not just her cousin, either. Although my child has made slow, steady, and normal progress, I find myself asking other moms at the park how old their kids are so I can see how mine stacks up. I'll work myself up into a frenzy over a friend's kid who knows four-syllable words or the bilingual toddler speaking way more Spanish than my kid. Like many millennial parents, I spend way too much time and energy worrying about how my kid measures up.

It's all in good fun, of course, until it isn't.

This phenomenon of comparing kids is fairly common and often begins with developmental milestones. As new parents especially, we're concerned about our own baby hitting those established marks "on time." Unfortunately, we tend to use other babies as a yard stick. Family practice doctor Yuri Lee encourages her families to track their child's individual progress as opposed to comparing them to children of the same age. "If your kid isn't sitting up on his own yet at 6 months but did go from rolling over from his front to his back and is now trying to roll over from back to front," explained Dr. Lee via email, "you can see that he's making good progress on his own timeline."

As parents, we know on an intellectual level that development varies widely from child to child, even within that range of normal. We know, for example and according to BabyCenter, that it's perfectly normal for a child to learn to walk anywhere between 9 and 16-17 months. However, knowing that and putting it into practice when our own child is a late walker are two different things. It's really hard not to feel like you've done something wrong when a younger playmate is cruising around your living room while your little rugrat seems content to crawl for the next several months.

The comparison game often continues once our children enter school. Instead of developmental milestones, we now have concrete academic standards by which to measure our children. There's intense pressure on parents and teachers to get kids reading in kindergarten or beforehand. But just like walking or talking, children learn to read at their own pace. Research even shows that children who learn to read later on catch up to their earlier reading peers. Waiting until a young student is ready can also keep them from experiencing reading burnout.

When we are so caught up in what other kids are doing, we can start to have negative feelings about our own child. We miss out on the happiness that comes from loving and accepting our individual child for who they are.

There are many reasons not to push academics. In early education, children should focus on communication, activity, exploration, and social interaction. When the emphasis is all on the three Rs, young kids lose out on the important learning of their age. Again, this is something most parents understand, but no one wants their kid to be the struggling reader. Viral videos of 9-month-olds reading high frequency words on flashcards don't do much to help assuage their fears.

Peer comparison is clearly not an effective tool for measuring progress, but would we still do it if we knew how bad it was for our kids? According to My Parenting Journal, comparison lowers self-esteem and confidence, causes unnecessary stress, and breeds resentment. Not only does this set the child up for a lifetime of negativity and self-doubt, but according to licensed professional counselor Kira Yanko, it can increase their engagement in activities that provide external validation, such as sex, drugs, and alcohol.

Keep those 'If only you were more like your brother' thoughts to yourself, and perhaps most important, don't let your own self-worth hinge on your child's accomplishments.

Excessive criticism of this nature doesn't just damage our children, though. "Overly comparing your child to the abilities/successes of others," says Yanko, "robs you, as the parent, of so much joy that can be experienced if you are truly mindful and present with your child's day to day life." When we are so caught up in what other kids are doing, we can start to have negative feelings about our own child. We miss out on the happiness that comes from loving and accepting our individual child for who they are.

So what's a parent to do? It's not so easy to just shut off the neurotic part of our brains that tells us our kids are "under-performing." Sometimes that stress and worry is important because it tells us when something is really wrong. In general, however, Yanko suggests that we balance the inner comparison with encouragement and reassurance to the child. Play to your child's strengths (without hanging all their worth on those things) while providing appropriate supports for areas of improvement. Keep those "If only you were more like your brother" thoughts to yourself, and perhaps most important, don't let your own self-worth hinge on your child's accomplishments.

It's easier said than done, to be sure, but it's worth the effort. As for me, I've begun to quiet the din of comparison by unfollowing friends and acquaintances who frequently post statuses that cause me to unfairly compare my child. When I get my daughter's progress report, I celebrate the fact that she loves school and knows how to be a good friend and push the fact that she doesn't know her colors to the back of my mind (and under the refrigerator magnet). When I see a toddler dribble a soccer ball or speak in full sentences, I still get a little pang, but then I remember that she's her own little person. She's doing great, and I'm not going to let an 18-month-old telling knock-knock jokes take that away from her. Or from me.