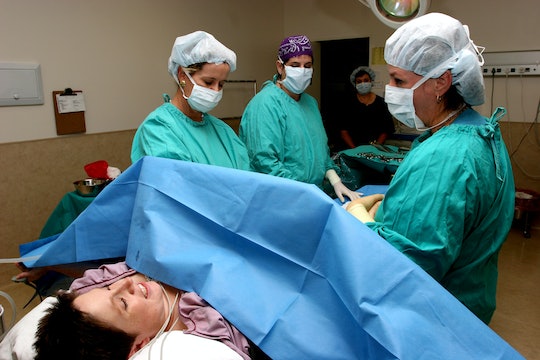 A lot of people tell me that when their water broke they mistook it for a potty accident, but I was not confused. I knew exactly what happened. I tried to go back to sleep (you know, to do the whole labor at home and conserve energy thing), but couldn't thanks to the excitement and the regular contractions. Little did I know that, about 18 hours later, I'd be in surgery. I'd considered the possibility, but there are things I wish I knew about an emergency C-section before I had to have one. If I knew then what I know now my labor, birth, and the next couple of weeks and months that followed would've been far easier than they were.

Despite being the method of delivery for approximately a third of all babies born in the United States, C-sections are often shrouded in some degree of mystery. Largely, I theorize, this is because they're also shrouded in horror stories and people don't want to think about the possibility that they will have to have one. But knowledge, even scary knowledge, is power, and if birth should be two things it should be safe and empowered.

You don't know what you don't know, so it makes sense that some things you can only truly understand after you go through them, but it still would have been nice to have some of that knowledge beforehand. Like the following, for instance: