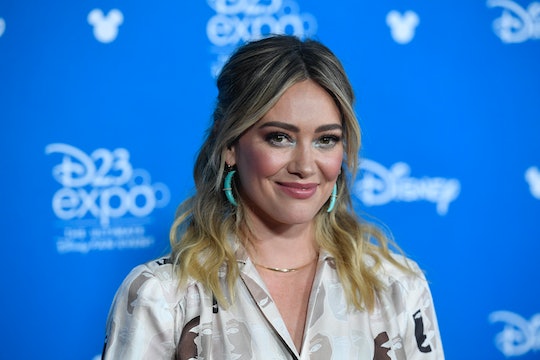 Hilary Duff Took Her Kids To Meet Santa & LOL, The Photo Did Not Go Well

As is the reality for most moms around the holidays, Hilary Duff's photo of her kids meeting Santa recently did not deliver a smiling, picture-perfect moment. There were tears, looks of terror, and the big man in red just sitting there patiently doing his job. Ah, the magic of Christmas.

The Lizzie McGuire star is mom to two sweet kids, 7-year-old son Luca with her ex-husband Mike Comrie and 1-year-old daughter Banks with fiancé Matthew Koma. She has been pretty generous about sharing some of her best parenting moments on social media with her kids, and as most moms know the holiday season is really a treasure trove of such moments, like visiting Santa Claus for an adorable family photo. This moment can pretty much go one of two ways: either your kids love Kris Kringle and want to cuddle up to him or your child screams in terror at this benevolent stranger.

In Duff's case, baby girl Banks went one way while poor Luca tried his best to contain things. As you can see in the hilarious photo she shared on Wednesday, Banks is not having any of it; she's supremely unconcerned about the fact that she is wearing an adorable camera-ready tutu and that Santa is clearly a very nice man. Not to mention patient. Instead, she is freaking out while Luca, whose expression truly says it all, tries to hold onto his baby sister.

Other moms took to Instagram to relate to the photo. "This is truly one of the best Christmas pic I've seen from a celeb omg priceless yes @hilaryduff Luca definitely need a gold metal such a great big brother," one commented, while another said, "This is amazing... brother of the year."

Duff has a history of being honest and humorous about her parenting journey, which is incredibly satisfying for other moms. While Luca is clearly on point during this visit to Santa, it was not so long ago that both of her kids were getting on her last nerve.

On Dec. 8 the Younger star shared a photo of her kids on Instagram being very loving with each other. Her caption, however, told a different story. "My kids are annoying the living sh*t out of me today... then they go and do this and make me feel so guilty," she wrote. "I swear I love them ......mostly but is it 5 yet?"

This is the roller coaster that is parenting. One minute your kids are whirling devils and the next they are placid little angels. What's a mom to do? Much like Hilary Duff, simply enjoy the ride. Besides, we all know that Santa is a pretty patient guy who is willing to lend a mom a hand.