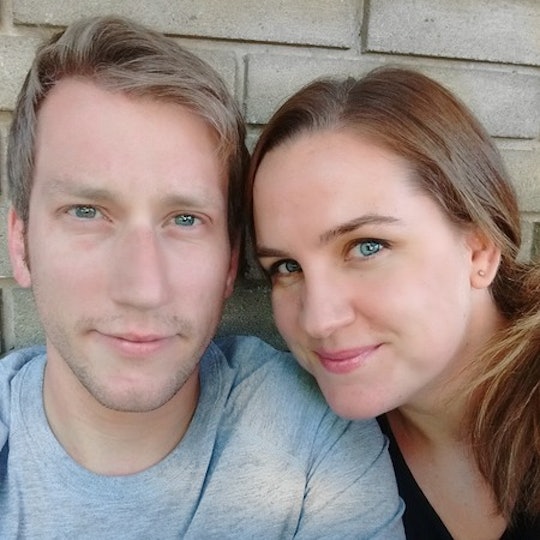 Honestly, My Sex Life Got So Much Better After I Gave Birth

Read any pregnancy-related magazine, book, or website, and you’ll almost always find something written about what it's like to have sex after you’ve given birth. The topics vary (What can you expect? What do experts have to say about it? Here are some real stories by moms about the first time they did it after popping out a kid!), but having read many of these articles myself before I even got pregnant, it seemed that they all more or less came to the same, unfortunate conclusion: that postpartum sex will probably hurt and/or not be as good as it was before.

I’d long been concerned by the idea that sex inevitably goes downhill after you have kids, because even before my husband, Matt, and I became parents, things were pretty much as bad as they could get. That's because I suffered from vulvodynia, a chronic pelvic pain condition which meant that sex was painful and not a whole lot of fun (as was anything that involved my vagina, like using tampons or getting pap smears). It also meant that, for the first seven or so years of our relationship, our options for sexy time were pretty much limited to “sex that hurt” or “no sex whatsoever" — neither of which were particularly attractive choices.

It's true, of course, that there are plenty of ways to enjoy sex that don’t involve intercourse, but when you can’t actually have intercourse, the fact that you are doing everything but having intercourse can start to feel like an elephant in the room. So when I finally found a fantastic OB/GYN after years of misguided advice, depressing doctor’s appointments, and medications and treatments that didn’t even sort of help, I was beyond relieved and excited. She prescribed me medication that actually took the pain away, and that meant that, for the first time in my entire life, I was able to have sex without it hurting.

In the beginning, I felt so overwhelmingly sick and exhausted and miserable that sex was the last thing I felt like doing.

Only a few months later, I found myself pregnant with twins. While we hadn't expected to get pregnant so quickly, the positive pregnancy test was a pretty big relief to two people who had once been told by a particularly unhelpful OB/GYN that I’d probably have to end up getting pregnant with help from a turkey baster. But as perfectly as our frustrating story had worked out for us, we hadn't spent much time at all experiencing pain-free sex prior to getting pregnant, and I worried we’d find ourselves back at the beginning once I pushed our babies out. After all, if “normal” women were having painful sex post-baby, then what chance did I have at avoiding it?

Making it even worse was the fact that my pregnancy turned out to be a complicated, terrible mess that took sex off the table for us pretty much entirely. In the beginning, I felt so overwhelmingly sick and exhausted and miserable that sex — even great, pain-free sex — was the last thing I felt like doing. But then, just as I was beginning to feel like a functional human again, I was put on bed rest with threatened pre-term labor at 21 weeks gestation, and three weeks later, I was admitted to hospital on strict hospital bedrest, already 2 centimeters dilated. Only one week after that, our twins were born at 25 weeks gestation, weighing less than two pounds each.

After delivery, I was pretty much a disaster. Physically, I was in rough shape, having had both a vaginal delivery and an emergency C-section, followed by a hematoma and post-op infection, but I was a wreck mentally, too. The twins were in the NICU hooked up to ventilators, and no one was sure if they'd even survive. Matt and I were both stressed out and sleep-deprived, and I was also stuck pumping breastmilk around the clock with abysmal results, trying to ignore the fact that I was a completely run-down and emotionally drained total mess of a human.

I saw the same guy I’d always known, the man I loved, except now he was also someone different. A dad. My children’s dad.

My pregnancy and the twins' birth may have brought our newly-invigorated sex life to a screeching halt, but a few months later, after we’d managed to lift our heads above water, Matt and I found each other again. This time, postpartum sex felt entirely new. I saw the same guy I’d always known, the man I loved, except now he was also someone different. A dad. My children’s dad. And it dawned on me in that moment that that same guy — the guy who literally saw my abdomen sliced open on an operating table because they didn’t have enough time to put the drape up, and who had to help hook me up to a double electric breast pump at 2 a.m. when I could barely even sit up in bed the evening after I gave birth — still found me attractive, and still wanted to have sex with me just as much as he did before.

Up until that point, I'd just accepted the usual narrative about what postpartum sex is really like — uncomfortable and weird, not that enjoyable, maybe even scary — and so I didn’t even know what to make of the guy standing before me who was not even sort of grossed out by my leaky nursing boobs or my scary-looking C-section scar or my stretch marks. I didn’t understand how I could possibly still be desirable to him after all that I’d been through physically, and all that we’d been through emotionally. I also didn’t really know what to make of the fact that after years of complicated issues surrounding sex, of fights and tears and sadness, and then such a brutal pregnancy and delivery experience, I still wanted to be with him, too. Maybe, in fact, more than I ever had.

Sometimes, sex after baby might just be better than ever, and maybe even when you least expect it.

As someone who'd battled chronic pelvic pain, I'd always thought that sex was just about attraction, about lust or romance or hormones, and that it was separate from everyday relationship stuff. But if he still wanted to sleep with me when I looked the worst I’d ever looked in my entire life, when I felt less desirable than ever, I started to wonder if, maybe, I'd had it wrong all along.

I still hear and read so many stories of couples whose sex lives have become completely derailed after having children, and think, I’m not quite sure how that’s not us. But having been thrown directly into the deep end of parenting and almost drowning completely, we came out of it more united and more accepting of each other.

Maybe I’m more accepting of myself, too. My children are almost 4 years old now, and the truth is that I still have the stretch marks. After this much time has passed, it's probably unlikely that my uneven (and still somewhat unsightly) C-section scar will ever look any better. My post-breastfeeding boobs might hang lower now, and I’ll probably never get confused for a Kardashian without the help of some major plastic surgery. But I also know that the one man whose opinion actually matters to me doesn’t care about any of that.

The downsides of sex after baby might be what we usually hear about, and, in a way, that can be a good thing. It's important, after all, to have those honest conversations, and to validate someone else's experience. It's certainly the kind of message I wish that I'd been able to hear when I was struggling with vulvodynia, honestly wondering if I was the only one out there dealing with it. But there’s something else we need to hear too, which is that less-than-stellar postpartum sex isn't the whole story, and it's certainly not a given. Sometimes, sex after baby might just be better than ever, and maybe even when you least expect it.