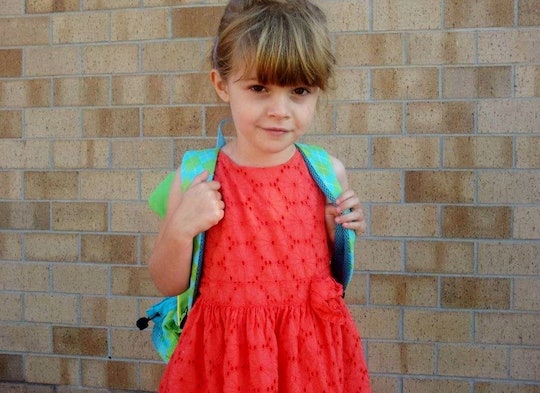 "Mommy, do you think I'm pretty?" Every time my daughter asks this innocent question, I panic. It's not that I don't think she's pretty, because she is. It's that I think pretty is overrated. I, for one, am happy I'm not pretty. I've always thought that if I worked hard, studied hard, and took risks I could move the world. Pretty girls, though? Well, I couldn't take them seriously, even though I know they're smart, hardworking, and brave, too. So, honestly, sometimes I wish my daughter wasn't pretty, and that she wasn't so focused on her appearance all the damn time. I'm worried how she looks will become the most important thing to her and about her.

I am more than aware that most people are hyper-focused on outward appearance in our culture. I know that, as a result, more often than not the first thing people are going to say about my daughter is how "pretty" she is. I know that the way we've been conditioned, as a culture, will leave my daughter beholden to her looks, while my sons get to be brave, strong, tough, and smart. And I know that during these exchanges, my children are listening. My daughter is listening.

According to a research report from Common Sense Media, the images kids see in the media promote beauty almost as a value. It's not surprising that a study conducted by Dove and Edelman Intelligence, which included 10,500 girls and women, found that 65 percent of girls feel pressure to meet unrealistic beauty standards, and that this palpable pressure to be pretty is negatively impacting their self-esteem. It makes me equal parts sad and angry and scared.

So when my daughter asks me if she's pretty, or when people comment about her looks, I can't help but cringe. I want so much more for her. And while I'm know my response stems from a projection of my own issues, I also know that it's rooted in a deep, natural need to help my daughter avoid societal bullsh*t about looks and perceived attractiveness and how that, in some way, attributes to her worth as a human being.

I wish she didn't care about her looks, or at least cared more about the other parts of her that make her incredible.

Personally, I am pretty damn proud of not being a "pretty girl." I shaved my head, I always wear what I want, and I have sincerely stopped caring about what other people think when it comes to my body and how I choose to look. It was, and continues to be, so freeing. What I look like is so irrelevant, and since I do not exist for the viewing pleasure of others, I am free to present myself in any way that makes me feel comfortable, confident, and safe. I want that for my daughter, too.

And that's why I was horrified to learn that she was participating in informal beauty pageants on the playground at school, letting mean girls, who really aren't her friends, judge her clothes, hair, and smile. She came home crying every damn time one of these so-called "pageants" occurred, because she didn't win. Didn't she know that like so many things in life, they were rigged? Why was this important to her? How did it happen to my kid?

One day after school, when she was crying and asking me, "Why can't I be pretty?" and as I held my sweet girl, I realized the depth of this particular struggle when it comes to parenting my daughter in a way that will help strengthen her. A part of me wanted to look her in the eyes and say, "Of course you're pretty," because, well, she is. She's gorgeous. But another part of me wanted to denounce the entire idea of "pretty," because I truly wish it wasn't important to her. I wish she didn't care about her looks, or at least cared more about the other parts of her that make her incredible.

My daughter is one of the friendliest kids I know. Making friends is her superpower, and she acquires at least one new friend everywhere she goes. She's also an incredible artist, able to draw realistic pictures and write stories that I actually enjoy. She makes me laugh, and I'm not just saying that because I'm her mom. And even though I carried her and know she's mine, I have no idea where she got her math skills from. They definitely didn't come from me.

And, yes, she's also pretty. But sometimes, damn, I really wish she wasn't. It seems to take the attention away from who she is as a human being, and that human being happens to be incredible beyond measure.

To make things even more complicated, I know for a fact that people would treat her differently if she wasn't pretty. While she's always been beautiful to me, she hasn't always been conventionally pretty. When my daughter was a couple of days old, she developed a red freckle on her face. At first we thought it was a scratch, but when my partner and I took her to the doctor for her one month check-up, the pediatrician told us it was a type of benign tumor called a hemangioma.

Her hemangioma grew until it was the only thing people could see when they looked at her. My partner and I took her to a specialist, and when she was about 18-months-old the doctors recommended that she have it surgically removed. It wasn't only for cosmetic reasons, to be sure. Because of where it was located, it wasn't likely that the hemangioma would resolve on its own. It was likely to ulcerate, too, which would have caused her pain and left a scar. So for my partner and I, it was an easy choice to have it removed and way before she was too old to remember the ordeal.

We need to remind children, and especially little girls, that what makes them great has absolutely nothing to do with their appearance.

During her first 18 months of life, though, people didn't see a "pretty girl." Instead, they saw her birthmark. So I was in the somewhat unique position of parenting a girl without constantly hearing comments about how pretty she was. It was, honestly, kind of amazing. Yes, my partner and I heard a few hurtful comments about our daughter's appearance, mostly from other children and older people who apparently have no filters. We would hear whispers about "that thing" on her face. And my mother-in-law actually suggested I photoshop her pictures. But for the most part, as her parents, we heard how smart, silly, creative, and amazing she was, instead of how "pretty" she was.

After that experience, and after the seemingly endless lessons I've learned as a woman trying to navigate a culture that constantly tells me I am only worthy when I adhere to some unrealistic beauty standard, I have had enough. As a mother, a partner, a woman, and a human being, I know we need to shift our focus. We need to remind children, and especially little girls, that what makes them great has absolutely nothing to do with their appearance. We need to stop positioning "pretty" as the end all, be all of female existence.

So while I am a little ashamed to admit that I wish my daughter wasn't pretty, I am not ashamed by my want to make sure people get the chance to know who she is. Because she is an incredible person. I try to find ways to tell her, every day, that she is more than how she is perceived. I make an effort to compliment her when she tries hard, achieves her goals, or does kind things. I try to focus on something, anything, besides how pretty she is.

Because my daughter is more than just a pretty girl.

More Like This
Mom On TikTok Asks Daughters Why They Want To Be Boys & Same, Girls, Same
A Parent’s Guide To Stomach Pain In Kids
101 Would You Rather Questions For Kids
Winter Travel Tips For Families
What Parents Are Talking About — Delivered Straight To Your Inbox