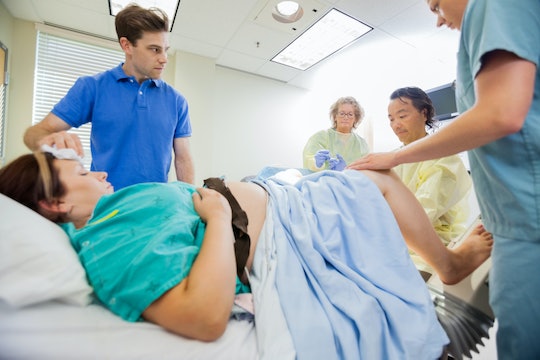 When you mull over the ins and outs of labor, like whether or not you will use medication and how long the process takes, chances are likely you are much more focused on the "out" part of the equation. Because that's kind of the point, right? The baby you've been growing for nine months is supposed to make their way out. But that's not always how it goes, whether it's the result of a breech position or baby who is too large. But how do doctors know that your baby is actually stuck?

"When patients are laboring we use a curve called the Friedman curve to assess the rate of cervical dilation and fetal descent," Dr. Lakeisha Richardson, a board-certified OB-GYN tells Romper in an email interview. "When patients deviate from the curve, physicians assume that the baby may have CPD (cephalopelvic disproportion) and is stuck in the birth canal. When this occurs prior to complete dilation, a C-section is the safest method of delivery."

Richardson explains that a top sign that points at a baby being "stuck" is a mom who has been pushing for too long without making any progress. For a first-time mom, this would mean pushing for more than three hours and approximately two hours for a mom who has had more than one child. A large estimated fetal weight may also be an indication that the baby may get stuck, Richardson says. "Most physicians will do a C-section for an abnormal fetal presentation such as breech," she adds.

According to Smart Parenting, your labor position may also affect how your labor progresses. The article noted that "the ideal labor position is one that lets gravity do the work, such as standing or squatting on hands and knees."

Sara-Chana Silverstein, an International Board Certified Lactation Consultant (IBCLC), tells Romper in an email interview that she has witnessed first hand the effectiveness of standing during labor. After 469 births, she says she has found that women who are allowed to stand during labor and delivery — and not lay down on their backs where the exit circumference for the baby is 53 percent smaller — have much better success with vaginal delivery. "Even if the baby appears to be large or stuck, those babies can exit via the vaginal canal easily," she says.

For "truly stuck babies," Silverstein explains that shoulder dystocia could be the problem. According to the March of Dimes, shoulder dystocia occurs "when a baby's head is delivered through the vagina, but his shoulders get stuck inside the mother's body." Dystocia means a slow or difficult labor or birth, and can create risks for both the mother or baby, the foundation noted. A transverse baby — when a baby is positioned horizontally in the womb — can also lead to a baby being stuck, Silverstein says.

"These presentations are real obstacles," she says, adding that a transverse baby will definitely require a C-section, while other presentations may still be delivered vaginally.

If your baby is breech, then there are a few things you can try to get them in the head-down position, including a forward-leaning inversion and breech tilt which, according to Fit Pregnancy, requires lying down with your hips elevated. Some women also swear by homeopathic methods, like acupuncture and moxibustion, while others opt for what's known as the elephant walk, which requires crawling, but staying on your feet instead of your knees, according to Better Birth.

One thing is for sure: That baby is coming out one way or another. Try to take heart in the fact that every birth experience is different, and that the important thing is that you and your little one are healthy.

More Like This
Here’s How To Combat Performance Anxiety When Trying To Conceive
Can Elderberry Help Prevent Illness In Kids? Doctors Weigh In
Are Boy Babies Usually Late? Signs Your Baby May Be Born Late
27 Sweet & Strong Boy Names That Start With “S”