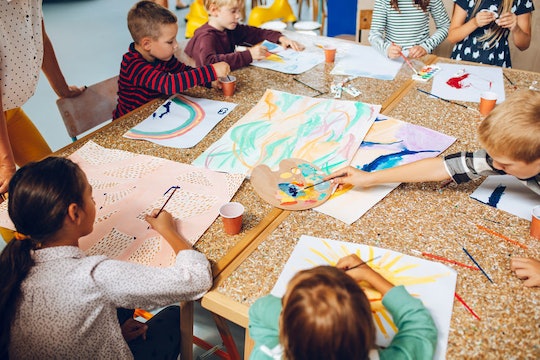 Women's History Month Isn't A Thing In Many Kindergarten Classrooms, And Grrr

When I was in kindergarten, the month of March was spent practicing our phonics, talking about spring, and maybe coloring a shamrock or two for St. Patrick's Day. No one back then taught kindergartners about Women's History Month, even though the 31-day period had been established for some time. Now, in the age of the Women's March, a more gender-balanced Congress, Michelle, Oprah, HRC, RBG, and women-hero Barbies, I began to wonder: How much has changed about the way we teach young children about women's history?

I'm a preschool teacher, and I've had the pleasure of helping many 4- and 5-year-olds build a solid foundation for their elementary school journeys. Recognizing women's achievements isn't part of that foundation, however. My school's curriculum (which is based on the state standards) emphasizes teaching general social-studies concepts such as the definition of community and the jobs people hold within it. We leave the history lessons for the kindergarten classroom.

But they may not be getting those lessons in kindergarten, either. After reaching out to numerous teacher friends, educational social-media pages, and teaching blogs over the last couple of weeks to collect anecdotes on Women's History Month lessons, I heard back from just a few kindergarten teachers who even have the topic in their curriculum in the first place. (One K teacher blatantly told me, "I don't teach history at all.")

On the upper end of the women-power teaching spectrum is Lauren-Sophia, a seasoned early education teacher from South Carolina. She explains, "I spend approximately one week on Women's History Month. I introduce it with read-alouds, videos, and think/pair/share opportunities with questions like: 'Name an important woman you know. Why are they important?'"

Lauren-Sophia, who also designs printable projects on historic women for other teachers to download, enjoys incorporating the topic into subjects other than social studies. For instance, she explains that "for Amelia Earhart, students enjoy creating paper airplanes [in science class]." They plan the design, make their planes, and compete against one another to see which flies farthest and fastest.

Another teacher I heard from has an awesome program in her school, which extends through middle school: The sixth-graders are partnered as "buddy" mentors to kindergartners, and meet once a week to work on class projects. "I'm going to get some books about women's history for them to research with their buddies," she says. "Then they can make posters to display around the school." She's using this list of notable women from Scholastic, which spans the centuries from Cleopatra to Joan of Arc, Mary Baker Eddy, Indira Gandhi, Sandra Day O'Connor, and Oprah Winfrey.

Yet another current kindergarten teacher admits that she doesn't cover Women's History Month now, but as a student teacher, "we would talk about women who were strong, smart, and bold — what they did to change history. So we read about Celia Cruz, Frida Kahlo, Dolores Huerta, Ruby Bridges — any woman who had to overcome adversity to rise."

On the other end of the scale were teachers who told me that they simply don't cover the month in their curriculum. For them, March is report-card time, so they're swamped trying to get their student assessment portfolios together and prep for upcoming parent-teacher meetings. They're more concerned with making sure their 5 and 6-year-olds are on target with their sight words and math fact families than they are with their knowledge of female innovators.

And even though March has been proclaimed Women's History Month by every president since 1995, it seems not everyone has gotten the message. On one kindergarten teaching forum I approached, one educator admitted, "I didn't even know this was a thing!"

It's not like there are no resources available to kindergarten teachers who want to introduce their students to the topic of accomplished women through the ages. Quite the contrary. The BrainPop classroom video website includes short and age-appropriate segments on heroines such as Grace Hopper, the naval officer who helped create the first computer programs. Sites such as EducationWorld and Teachers Pay Teachers offer lesson plans and activities for all grade levels that teachers can use in their classrooms. And Pinterest is a veritable paradise for early-education professionals looking for worksheets and projects on women's history and other topics.

Unfortunately, not every kindergarten teacher is free to take advantage of the materials out there. In recent years, schools have de-emphasized social studies in the early grades, according to a Chalkbeat report. Despite expert arguments that social studies help children become involved, responsible members of society, the current stress on standardized literacy and math testing has pushed history lessons to the back burner. The Chalkbeat report added that teachers often don't get the ongoing professional training they need to educate students about issues such as women's and civil rights history.

So depending on where you live and which kindergarten your child attends, they may very well be spending their March immersed in lessons about Marie Curie and Mae Jemison. On the other hand, they may be plugging away at their numbers and letters with no clue about the significance of the month or any of the women worth honoring (not even Malala Yousefzai, who has devoted her young life to the cause of girls' education worldwide).

Speaking as an educator as well as a mom, I think it's time schools brought social studies — including Women's History Month — back to our kids' preschool and kindergarten classrooms. How can we expect our children to change the world, or even want to, if their knowledge of accomplished women begins and ends with Moana and Elsa? Not to knock the Disney heroines (I'm an Elastigirl fan myself), but there are real-life role models that deserve at least a small introduction to the youngest learners.

At this age, kids are not only well aware of gender differences, they're also starting to internalize some of the stereotypes. I've heard my pre-K students say things like "This is just for boys" or "I want to be a princess when I grow up." By the time they get to second or third grade, they may already have doubts about their potential in life.

Young children may not be ready to memorize dates or make historical timelines, but they're more than capable of listening to and appreciating women such as Rosa Parks or Jane Goodall. Both at school and at home, let's do more to help broaden our kindergartners' horizons beyond fairy-tale characters. Let's teach them about the women who helped create real happily-ever-afters.