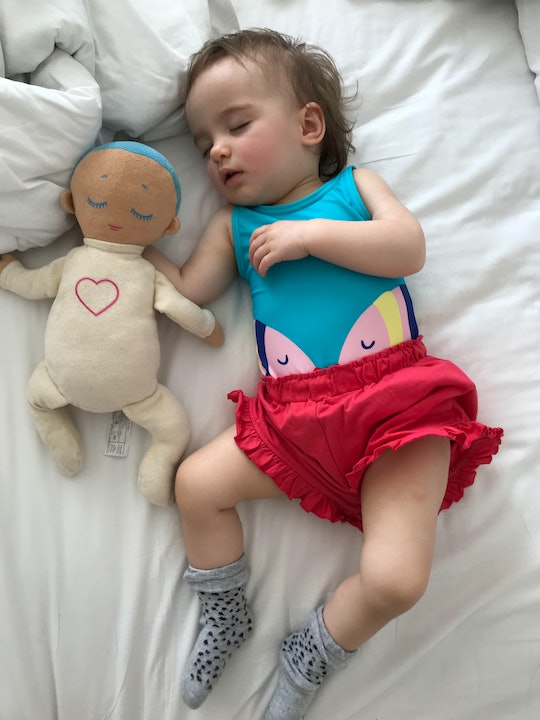 "She still doesn't sleep through the night?" It was a simple question, but one that put me on edge immediately nonetheless. "My son has been sleeping through since the 16-week mark. I don't hear a peep out of him most evenings." At the time, my eldest daughter, Luna, was 15 months old. My partner and I hadn't had more than three hours of consecutive rest in one night since she'd been born. Sometimes, she'd wake every hour on the dot. Maybe she has peed. Maybe she wanted to comfort feed. Maybe there was no apparent reason at all. Over a year into what felt like our descent into madness thanks to the lack of snoozing, it was difficult not to be jealous of my friend's baby for sleeping all night long. It was difficult not to feel like, somewhere along the way, my husband and I had messed up our kid's sleep cycle for good.

Almost everyone knows that one magical sleeping infant; the one who defies the odds and allows its parents to sleep through the night, every night, so that they subsequently feel like actual human beings come the morning. My friend's son was that baby. Whenever I'd catch up with her on FaceTime, she'd reference my exhaustion. Not out of cruelty, I don't think; but rather out of disbelief that I could be struggling so much. She never had to try cry it out. She never had to pay a "sleep coach" $200 for what would prove to be a useless Skype call. She never had to experience the debilitating state one's body and mind seems to enter after months, atop of months, of little to no rest.

I can admit that I was envious. I tried not to be. I tried to tell myself that every baby is different, and that my daughter wouldn't always be this way. I tried to remember that no one method of sleep training works for everyone; and that no one sleep arrangement (bed sharing versus room sharing versus putting them in their own room from day 1) guarantees good nighttime habits. Still the journey to quench my jealousy would be a long one.

It's all too easy to blame yourself when your baby doesn't sleep. Although I had set up Luna's nursery a month before her birth, crib included, I never actually put her in there. My midwives kept reiterating that having a newborn in the room with you is the safest course of action, because you can more easily hear them and grow accustomed to the various noises they make when hungry, tired, or soiled. In turn, we got a Moses basket, which we planned on using for the next six months.

A couple of weeks after Luna was born, however, I gave up on the Moses basket. She had to be woken every two hours to feed (due to having a low birth weight), and, quite frankly, I was too tired to get up and out of bed every two hours to match. We moved her into our bed at that point, where she'd stay for the next eight months.

She came back to bed with us, and stayed for another seven months.

By that point, we were pretty desperate to get our privacy back. We tried every method for sleep training out there: pick-up put-down, fading, the chair method, and eventually cry-it-out. The latter seemed to work best, and eventually Luna could sleep on her own for about six or seven hours at a time. We thought we'd cracked it. We thought we were on route to an eight-hour night once more.

Until she got sick. A really nasty cold meant that Luna desperately wanted our company. One night, she cried in her room for about two hours until we had finally had enough. She came back to bed with us, and stayed for another seven months.

Despite feeling our presence beside her, Luna still didn't sleep well. We'd try to sleep train again, but we were so exhausted and wound up that it was simply easier to keep her with us. At least in our bed there would be no screaming. Tossing and turning and climbing, maybe, but these were better than screaming.

I couldn't help but turn the blame on myself when, over a year into her life, she still wasn't resting well. According to the National Sleep Foundation, "Nighttime feedings are usually not necessary and many infants sleep through the night" by 6 months old. Approximately 70 to 80 percent of babies sleep through by 9 months old, and toddlers can typically go for 11 to 14-hour stretches in the evenings.

When I looked at my friend's son, I knew that his mother had put him in his own room immediately after birth. It was what her mother had done before her, and what she had been taught would lead to an ideal infant sleep pattern.

This was never Luna. At 6 months, she still wanted to nurse through the night. At 9 months, she'd wake every two hours. As a young toddler, it was more like every hour. Had we done this? Should she have gone into her crib the same night we brought her home from the hospital? Should we have kept her out of our bed? Should we have been more disciplined with sleep training? Should we have let her cry it out for longer?

When I looked at my friend's son, I knew that his mother had put him in his own room immediately after birth. It was what her mother had done before her, and what she had been taught would lead to an ideal infant sleep pattern in no time. She had, occasionally, speculated that Luna would be a good sleeper if I had given her more independence from the get-go.

The thing is, though, Luna actually was quite independent. In the day, she was social and outgoing; brave and curious; funny and warm. She was, and remains, deeply affectionate and loving. At times (particularly when presented with a new situation), she shows caution and skepticism. She might cling onto her father or me while assessing the situation, but she is almost always up for a new adventure. Her co-dependence at night simply did not correlate to co-dependence the rest of the time.

For the associated risks (which diminish after age 1), according to The Independent, there are myriad benefits to bed sharing. The longer a mother bed shares, the longer she typically nurses. Bed sharing has long been thought to cultivate bonding between parents and their children as well. According to Dr. James J. McKenna of the University of Notre Dame, who is recognized as the world’s leading authority on mother-infant co-sleeping in relationship to breastfeeding and SIDS, "It is not solitary sleeping arrangements that produce strong independence, social competence, feeling of high self-esteem, strong sexual identities, good comportment by children in school, ability to handle stress, but it is social or co-sleeping arrangement that contribute to the emergence of these characteristics."

I will never know for certain if it was our lack of a regimented sleep routine that prevented Luna from sleeping through the night. I will never know if it was my friend's choice to use the nursery from day 1 that made him a miracle sleeper. What I do know is that for every sleep training method or arrangement, there will be statistics and data out there citing both its benefits and drawbacks. There will be a study hailing it the "best" way to get baby to sleep, and a study hailing it the "worst."

Screwing up her sleep routine did not equate to screwing her up.

The way I got over my jealousy regarding my friend's baby, and all babies who slept through quickly for that matter, was simply to tell myself that my daughter's sleep pattern was the least interesting thing about her. Even though she kept us up all night, nearly every night, she was her own miracle the rest of the time. Her wit, her cleverness, her loving disposition, and curiosity about the world around her all outweighed her pesky tendencies towards insomnia.

I could berate myself for "screwing up her sleep routine," and sure, there are definitely things my husband and I could've done better. The point is that screwing up her sleep routine did not equate to screwing her up. We were raising a happy little person who could bring so much joy to those around her. We were getting a hell of a lot of things right.

And yeah, it helped to keep in mind that this wouldn't be forever. Shortly before my daughter was a year and half old, we tried sleep training once more. She had a little sister on the way, and our hope was that Luna would be in her own room by my due date. No-tears methods had never worked for us, so we went straight to cry-it-out. It was, perhaps, the hardest thing we've ever had to do. No parent wants to listen to their child cry, particularly when it feels like you have the ability to stop it. But guess what? Within two nights, Luna was sleeping through the night. Just as she has almost every night since.