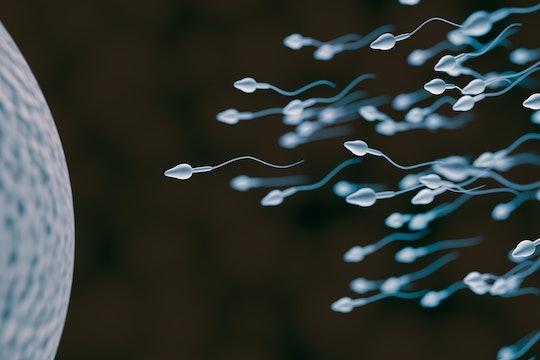 Trying to have a baby means you have nailed down every single aspect of your cycle, including the length of your period and the days you are ovulating. After all, it's all part of the recipe for estimating the best time to get busy and make a baby. But what about your partner? It seems like sperm is just a given in this equation and you know what its job is. But, like your eggs, is there a time when his swimmers are most viable for trying to conceive (TTC)? How long does sperm live? Experts say there’s a window of opportunity that can’t be missed.

If you're hitting the sheets a couple of days before ovulation, the sperm could still be there by the time an egg is released. "Following ejaculation, sperm are viable for two to three days on average and up to five days," Dr. Alison Zimon, a top reproductive endocrinologist and co-medical director of the Colorado Center for Reproductive Medicine in Boston, tells Romper in an email interview. "There have been reports of longer lifespans of sperm of greater than six days, but this is believed to be atypical."

Zimon points out, however, that a woman's egg is only viable for 12 to 24 hours. "Therefore, because the life span of sperm exceeds that of eggs, we recommend anticipating ovulation so that the sperm are either arriving simultaneously or ready and waiting for the recently ovulated egg," she says. Therefore, timing intercourse on the day you see a luteinizing hormone (LH) surge — as well as the following day — is an optimal strategy to enhance the probability that a viable sperm will find a viable egg for fertilization, Zimon explains.

Dr. Aaron Styer, the medical director of The Colorado Center for Reproductive Medicine in Boston, tells Romper in an email interview that because the egg is only viable for about 12 to 24 hours after it is released, it won't hurt to take full advantage of that window and have sex beginning four days prior to ovulation through the actual day of ovulation if you are trying to conceive. That way, even if ovulation hasn't quite begun, the 72 to 96-hour time frame sperm will stay alive means there could be a few hanging around when it does start. In simple terms: Sperm in waiting meets your egg and boom — baby time.

Of course, now that you know that sperm can indeed live outside of the body for quite some time, you might be wondering just how far you can extend that truth. For instance, if you happen to join your man in the bath or hot tub for, um, water conservation purposes, then can you get pregnant? According to Healthline it's unlikely, seeing as how sperm would have to have travel a direct path through the water and to your vagina. Plus, in the hot tub scenario, the temperature of the water and even the chemicals would kill the sperm in seconds.

And there are a few things your partner can do to improve their fertility. In addition to avoiding hot tubs and showers, reducing soy intake, limiting alcohol to one or two drinks per day, and getting enough sleep are helpful. It's also important that both of you keep in mind that sex for the purposes of TTC might all of a sudden feel like a chore. While some people might initially feel liberated by not needing to use a condom or other contraceptive, scheduled sex might make it feel less fun, says Dr. Jeannie Kim, an OB-GYN at ColumbiaDoctors and Assistant Professor of Obstetrics & Gynecology at Columbia University.

The one thing all experts say to keep in mind? In the midst of all of the egg and sperm talk, things can feel stressful, if not perfunctory. Take some time to circle back to the connection the two of you have as partners. Because, like any parents, when your little one arrives, you'll be putting a lot of energy into their well-being. And one thing is for sure: Knowing how to nurture your relationship will help the two of you survive diaper duty and 3 a.m. feedings — together.