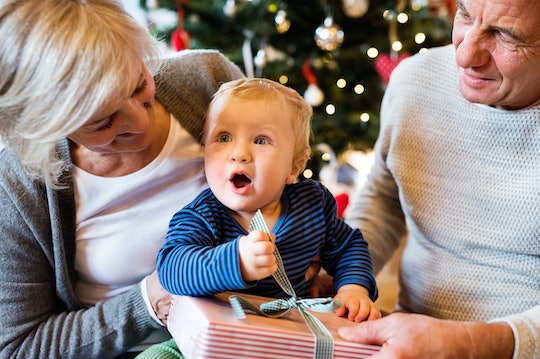 A couple months before the holiday season rolls around is when most families start thinking about gifts — planning them, asking their children want they'd like Santa to bring, and making empty threats about lumps of coal when the kids are acting like jerks. It's not out of the ordinary for parents to spend a couple hundred dollars per kid. (If they can swing it and want to, of course.) But how much do grandparents spend on Christmas gifts? TBH, according to research, it's probably more than you expected.

But first, let's gain some perspective. According to RetailMeNot, parents planned on spending $330 on children in 2017. However, according to Forbes, parents were predicted to spend $495 per child in 2016. So I'm just going to go with a happy medium, and assume the actual number is likely somewhere in the ballpark of $400 per child. With this in mind, where do grandparents fall on the spectrum?

Other interesting findings from OppLoans include:

Another source of data offering insight into grandparents’ gift-spending habits can be found in a 2018 AARP study. On average, the nation’s 70 million grandparents are shelling out $805 in gifts annually on their grandkids. It’s worth noting this isn’t for Christmas presents specifically, so it likely includes birthday presents and gifts for other occasions.

I don't know about you, but neither my parents nor my husband's parents spend anywhere close to $200 per grandchild on Christmas presents. In fact, that's closer to what we actually spend on our kids. Still, the research is in and it seems grandparents across the United States, on average, like to loosen the purse strings for their grandkids for the holidays.