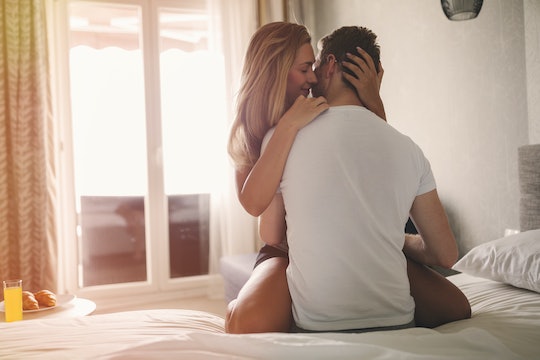 Whether you are in a rut or simply too busy to find time between the sheets with your partner, it's not uncommon for your sex life to hit a snag every now and then. Of course, some women also balk at the idea of suggesting sex to their significant other. (Or they're really nervous about it.) No matter the reason, experts say there are a few tips for how to initiate sex with your husband that you might want to keep in mind.

"Initiating sex can either be a total breeze or a tricky terrain to navigate," Britanny Burr, editor at large and relationship expert for Psych N Sex, tells Romper in an email interview. "I always advocate for being straight up if at all possible." Of course, she notes that's easier said than done, because there is certainly a "draw of being more subtle and aloof when it comes to portraying your intentions." If you're looking to initiate sex and also make it sexy, then Burr says body language is huge.

"Eye contact, subtle smirks, and fluidity in your movements are key. Also, physical touch that is suggestive but not overtly sexual can really do the trick." Burr says, for example, consider placing your hand on their thigh when speaking to them or drawing them close in conversation with a hand on the back of their neck. "[This] will create connection and the physical stimulation will likely generate arousal."

Jonathan Bennett, a certified counselor in Columbus, Ohio and creator of The Popular Man, says working up to sex by turning your partner on in advance is also key to initiation. "Since most couples are busy and stressed, find creative ways to get your partner in the mood," he says. "One way is to send suggestive texts and pictures throughout the day." But he cautions: if you’re both at work, keep the texts subtle to avoid an embarrassing NSFW situation.

Bennett says it's also important to, um, straddle the line between being direct and demanding. "Sometimes the best way to get what you want sexually is to ask for it," he says. "Explain that you’re in the mood, you think your partner is looking extremely sexy, and you’d like to make love. This method beats hoping your partner reads your mind and takes the initiative."

But be sure you also don't ignore your partner if they just simply aren't in the mood. Bennett says if your partner doesn’t want to be intimate and your efforts at seduction aren’t getting anywhere, then it’s better to try again at another time instead of resorting to negative tactics, like guilt trips and demands.

Dr. Charlynn Ruan, a licensed clinical psychologist at Thrive Psychology, agrees, adding that it's important to know his moods and what is a deal-breaker for his sex drive. For instance, she says, if stress typically impacts his libido, then save yourself the effort and don't hit him up right before a big meeting.

"I think it is a myth that men are always ready to go sexually," Ruan tells Romper in an email interview. "And it is a damaging myth because then women take a man's lack of interest personally. Men need some emotional and physical foreplay, too."

Bennett says you also shouldn't discount penciling in sex if necessary. "It might sound unromantic, but it might be necessary to schedule intimate moments if you’re both too busy or stressed to find time to let it happen naturally," he says. "Believe it or not, even scheduled intimacy can be passionate if you can find creative ways to build up the anticipation and excitement."

And never discount the power of an unexpected deep, long kiss or showing a little skin, Burr says. "If you happen to be changing in front of them, do it slowly, face them, maybe even throw some eye contact in there to show that you are fiercely comfortable with your body and your body in their presence," she says. "If all else fails 'I want you' is a seriously underrated phrase."

Because after all, Burr says, everyone likes to be wanted.