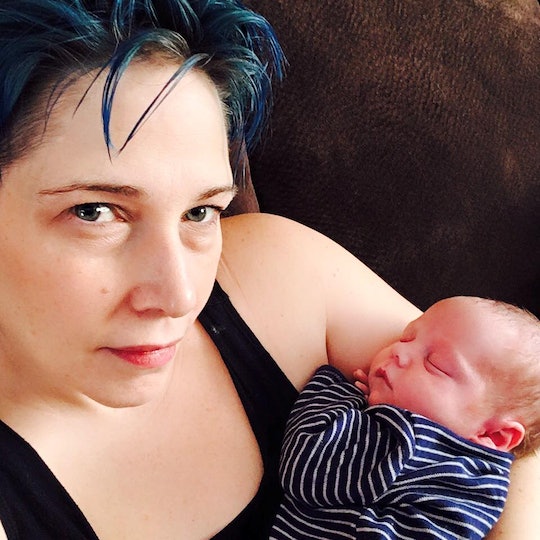 I always planned on having two kids — a girl and a boy. After my husband and I got married we found ourselves on the same procreation page and everything went according to plan. Well, sort of. We did have two babies, but we also got a divorce. As a single mom to two, literally the last thing I wanted was another baby to parent. That was, of course, until I met my current husband and found myself questioning everything. It turned out that deciding I was done having babies was one of the most difficult decisions I have ever had to make, even though between the two of us we had four kids. There was no blueprint for the size of our family that could alleviate the burden of that decision, either. It was my body, it was my choice, and I miscalculated just how hard it would be to make.

So, my husband and I questioned our initial plans. We did some serious soul-searching and had numerous discussions and weighed the pros and cons of adding another human life to our family of six. And, in the end, we decided to try to conceive. Our new plan was his two kids + my two kids + one baby. Yes, that's five children in total which, if you're into the whole counting thing, is enough for our own basketball team. Who knew that I would want to be responsible for five kids, right? Because I sure as sh*t didn't... until I did. So I got pregnant and brought child number five into the world. My husband and I decided to name him Finn, which I thought was as fitting as it was adorable. After all, the French word for "end" is "fin," and I knew he was going to be my last child.

Life changed dramatically after Finn was born, and while I love our huge, messy, loud, blended family, I decided I was done for good, and I mean for good. My son is almost adorable enough to want to have another, though. Almost. But after going through the hell that is hyperemesis gravidarum and throwing up for nine consecutive, miserable months, I never want to be pregnant again. Ever.

As I recovered from surgery, and snuggled my newborn, I felt a palpable sadness creep over me.

Which is why I decided to get my tubes tied. Thanks to Obamacare the procedure was covered fully by my insurance. I assumed the knowledge that the procedure wouldn't put a financial burden on my family would make it an easy choice, but I was wrong. It turns out, deciding I was done having babies would be far more difficult than I ever could have imagined. It was just so, you know, final. Permanent. A permanent body modification to change the way my body works — forever. It felt ominous. Still, I knew avoiding even the possibility of pregnancy was what I truly wanted, and what was truly best for me and my family, so into that operating room I went.

As I recovered from surgery, and snuggled my newborn, I felt a palpable sadness creep over me. I cried, and cried some more, and part of me wished I could take it all back. I'm sure I could blame that moment of remorse on a relentless combination of postpartum hormones, looking at my beautiful baby, and knowing that I wouldn't have more children. Then again, maybe it was the finality of the procedure that made my current reality more daunting than comforting. Either way, I regretted not being able to change my mind. After two decades of birth control that I could easily decide to forego taking, it felt so life-altering to let a surgeon cut into my body and end my fertility.

I don't know why I felt this overwhelming feeling of regret. I mean, I didn't make the decision lightly, and my husband and I agreed that our family is complete. We have five children, after all. But there's something so final about sterilization. I can't get pregnant. I can't get pregnant. After months of sleep deprivation, and adjusting to our new family of seven, I knew I was done, but the words still sounded so surreal.

Then, a few weeks ago, I started throwing up, my period was late, and I wondered, could I be pregnant? I mean, I knew the chances of getting pregnant after a tubal ligation were pretty small, but I hadn't felt that sick since I was pregnant with my son. I took a pregnancy test, and found myself actually hoping that it would be positive. But, wait, I didn't want to be pregnant, right? We're done expanding our family. I'm done having children. We had a new plan, remember?

Who was I, if not a woman capable of reproducing if she wanted?

Fortunately, the test was negative. So were the next three tests. When my period arrived, though, I was a little disappointed. I found myself feeling lost, confused, sad, regretful, thankful, and anxious. Who was I, if not a woman capable of reproducing if she wanted? Who am I right now, if I can't at least make a definitive decision about my reproductive choices?

I think it hurts, in part, because it represents the end to a chapter of my life. I've spent the majority of my life actively preventing pregnancy, actively trying to conceive, or pregnant. Now that I'm done with all three, I don't really know what I am doing. My period is no longer cause for celebration or disappointment. It's just a period. Sex without worrying about pregnancy is fantastic, but what if my sex life only goes down from here? I know that these worries are probably irrational, but that doesn't stop me from having them.

I am getting to a place of peace with being done having babies, even if it is still a bittersweet realization. Honestly, I don't know when the sadness will go away, entirely. Maybe menopause? Or maybe a little bit every day, as I watch my kids grow? Until then, I will curse my period, snuggle my baby, and enjoy my unplanned family just the way it is.