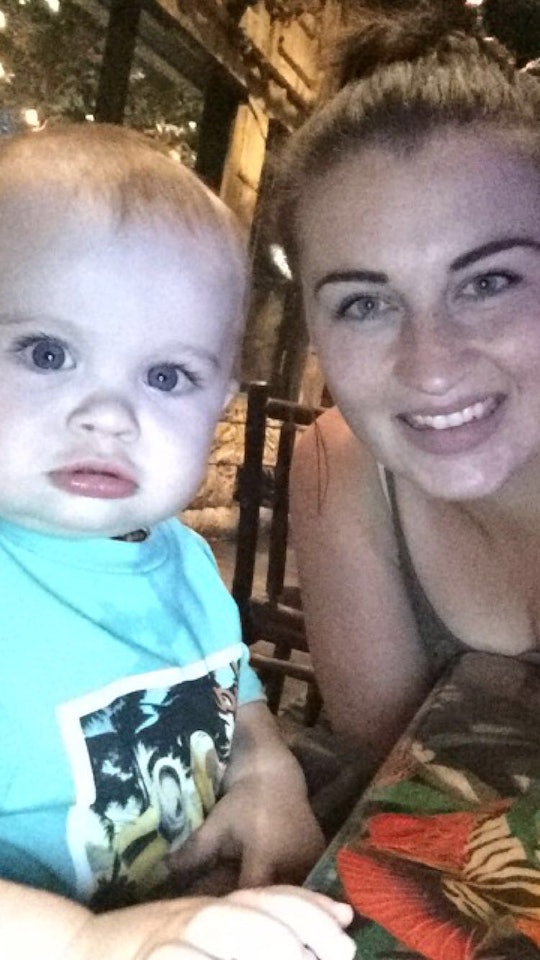 Breaking up, separating, and divorcing are obviously very painful things for a person to go through, depending on the circumstances. And when children are involved, it’s a significantly more complicated process. When I first heard that Angelina Jolie filed for divorce from Brad Pitt, my first thought was about their six children. Sources close to TMZ, who first broke the story, claim the divorce stems from the "way Brad was parenting the children," but Jolie and Pitt have not confirmed that allegation. Romper reached out to both parties' publicists and attorneys, and a general statement given by Jolie's attorney Robert Offer to the media read: "This decision was made for the health of the family. She will not be commenting, and asks that the family be given its privacy at this time."

In a separate statement provided to PEOPLE, Pitt said: "I am very saddened by this, but what matters most now is the well being of our kids. I kindly ask the press to give them the space they deserve during this challenging time."

Though I don't know the intimate details of Jolie and Pitt's relationship or the reason why she filed for divorce from her husband of two years and partner for 10, I can say that I understand the motivations behind not wanting to co-parent with an ex. (And to be clear, I'm not at all suggesting that this is what Jolie wants.) I commend people who are able to co-parent with together, because I don't co-parent with my ex for a number of reasons. One of the main reasons why I choose not to co-parent with him is because I don't trust his parenting capabilities or philosophies (or, to put it plainly, the lack thereof).

I didn't start out feeling this way. I'd always been open to my ex being a large part of his son's life despite a messy ending to our relationship, and though he'd been emotionally abusive, I was not withholding or vindictive when I easily could have been. It became clear soon after my child was born that not only was my son's father not going to be a part of his life due to geographical reasons, but also because he failed to follow through on promises both physically (showing up) and financially. (At this point, I haven't filed for child support.)

Whenever I try to offer my ex guidance or direction when it comes to our son, he immediately takes on an combative attitude with me, even though he's never once bothered to educate himself on his growing son's ever-changing needs.

On rare occasions when he did visit, he'd disregard, or completely undermine my scheduling instructions for feedings and nap times, calling me "controlling" and "uptight." He'd talk to our son, passive aggressively saying, "We hate mom's rules," or, "She doesn't let you do anything does she?" He'd also say things like, "You're going to get all the b*tches when you're older," and I just about vomited when I heard that. I know that, as 10 month-old baby, my son can't understand or absorb what his dad is saying, but I am terrified thinking there might come a time when he does.

I personally think a successful co-parenting relationship derives from mutual respect and understanding. I believe that a willingness to communicate with one another about the best ways to parent a child is extremely important. In my case, because I'm the main caretaker of my child (and because I'm also helped by my own parents), I am the one who knows what kind of food my child needs, or how much sleep he needs to get, what safety precautions to take, and basic signs to look out for in terms of maintaining his well-being. And when I'm constantly undermined by my ex, we lose any foundation to co-parent upon.

I don't know why Angelina Jolie believes that the "health of the family" will be better in divorcing Brad Pitt, but I don't begrudge or judge her for making that decision. She's doing what she feels is best for their children. And I'm doing the same for mine.

My ex often makes demands to have my son stay in a hotel with him on the rare occasions when he does visit, an idea I'm not comfortable with. Whenever I try to offer my ex guidance or direction when it comes to our son, he immediately takes on an combative attitude with me, even though he's never once bothered to educate himself on his growing son's ever-changing needs. I often get severe anxiety just leaving my child with my parents, two people who are well-experienced and wholeheartedly trustworthy. The fact that I feel this way is something I've tried to reiterate to my son's father multiple times, but I'm always met with accusations of "not being over him" or just "wanting revenge." I try not to take it personally, because I know it's yet another manipulative form of emotional abuse he tries to use on me, but those words sting no matter who they come from.

My ex always says that because he's the father of our child, he doesn't need my permission to have his son or do something for his son. In his eyes, co-parenting our child is separate from whatever issues we have. Unfortunately for him, I believe a happy, healthy kid has parents whose ideas are cohesive and at least found on the same page. So until my ex is able to see that the way we interact does matter in how we raise our son, I won't ever be comfortable co-parenting with him.

I would be naive to think that two people who co-parent together are always on the same page. As someone who co-parents with her mom and dad, I know that we don't always see eye-to-eye when it comes to raising my son. We constantly have to communicate and not take things personally if (and when) we disagree. I don't know why Angelina Jolie believes that the "health of the family" will be better in divorcing Brad Pitt, but I don't begrudge or judge her for making that decision. She's doing what she feels is best for their children. And I'm doing the same for mine. I don't co-parent with my ex for the safety and vitality of my son's life, as well as my own. I give him the opportunity to be involved, but for the health of my own son, I know the importance of having a stable, supportive, encouraging parent.

At this point, I feel that the relationship I have with my ex is much too contentious to be beneficial to my son. I've made a lot of sacrifices, but none that I regret, in order to raise my little boy the way I feel he needs. I work hard every day to deserve to be his mom. My ex, on the other hand, feels it's his inherent right to do and "parent" as he pleases. At every turn, he belittles and insults my parenting, both directly and indirectly. If given the option, I'm scared he'll force my son to pit us against the other. So with that, I don't co-parent with my ex.