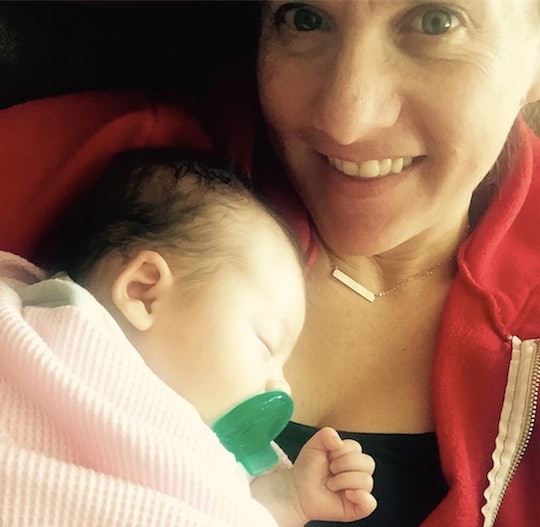 I Hated Being Pregnant, But I Can't Wait To Do It Again

When I found out I was pregnant with my daughter, I was elated. I was excited to experience all that came with growing another human being inside of my body – the good, the bad, and the ugly – and feeling the beauty and magic that comes with creating a life. However, for me, the ugly seemed to rear its little head far more often than the beauty did, and as my feet and hands and face began to swell with every growing ounce of my child, I started to feel less and less magical with each passing day. I also developed preeclampsia at week 30 of my pregnancy, which was a pretty scary complication that I hadn’t anticipated in my wildest dreams. But even though I didn’t love the bed rest, swelling, pain, multiple needles, and the never-ending weekly checkups that came along with growing and eventually delivering my daughter, I'd do it again in a heartbeat.

To be fair to my now incredible 9 month old, she was just doing her job and growing as she should. But with her growth came all of the typical pregnancy side-effects: nausea, vomiting, hemorrhoids, weight gain, and swollen feet and hands. It also came with the not-so-common ones: I had to go on rest, pee in jugs, I was hospitalized early, and experienced vertigo and an early induction. Oh, and yeah, I had preeclampsia. According to the Mayo Clinic, preeclampsia is a pregnancy complication characterized by high blood pressure and signs of damage to another organ system, often the kidneys ... [It] usually begins after 20 weeks of pregnancy in a woman whose blood pressure had been normal ... Left untreated, preeclampsia can lead to serious — even fatal — complications for both you and your baby.

The fear I'd had about getting pregnant again, along with the pain and exhaustion I felt before and after giving birth, flared up when I even hinted at maybe, maybe having another. But then I’d look at our daughter, my heart would melt, and I’d start to daydream about her sibling.

I'd never known anyone who had to basically stop their life at week 30 of pregnancy to just sit and wait to become a mom. I'd been surrounded by beautiful, healthy women who worked up until giving birth and they'd all told me typical stories of their waters breaking while sprinting to Starbucks in between work meetings. Hell, I was the person who joked that I'd probably go into labor at work and just hail a cab and be on my way. But my reality was much, much different. So much so that I dealt with some postpartum issues months after my daughter was born that I’m sure were at least partially related to the stress I was under leading up to her birth. In those early days, my husband would sometimes wistfully talk about a second child, a sibling for our little girl, and I'd instantly retort with something along the lines of, “One and done. This shop is closed.”

However, as the months wore on, our daughter started sleeping more and we both started to come out of the haze that is the first six months of parenthood. I began to feel more like myself again and started reflecting and talking about the entire experience with my husband and close friends and family. The fear I'd had about getting pregnant again, along with the pain and exhaustion I felt before and after giving birth, flared up when I even hinted at maybe, maybe having another. But then I’d look at our daughter, my heart would melt, and I’d start to daydream about her sibling. And the best part was that, over time, I began to realize that the thought didn’t terrify me anymore – it excited me.

It’s as simple as this: I hated being pregnant, but I love being a mom, and the journey is one I’d be honored to take again.

Perhaps it’s the amnesia that comes with childbirth that keeps our entire species going, perhaps it’s my hormone fluctuations that haven’t quite leveled out yet, or perhaps it’s as simple as this: I hated being pregnant, but I love being a mom, and the journey is one I’d be honored to take again. However, that doesn't mean that it doesn't terrify me. I'm scared that a second pregnancy would be even harder because, this time, I have an ever-growing and demanding child to take care of, and I want to be as available and healthy as possible for her, let alone myself. And it's certainly a risk — the likelihood that I'll be diagnosed with preeclampsia again is high, though not a guarantee.

If someone had told me prior to getting pregnant what the whole experience would entail, I may not have done it. But that was before I met my little girl, and she changed everything.

Even though it was scary, my first pregnancy also empowered me. I know what the warning signs of preeclampsia are and what they feel like; I know how to better take care of myself to help get as far as possible before potential bed rest; and I'm comfortable advocating for myself with my doctors if I feel something isn't quite right. Sure, it almost certainly means an emotional roller-coaster again, but that's not unique to my situation, that's common for many new moms. And it certainly means I've chosen this path over sleep for the foreseeable future, though that's the case for all new parents.

It also means that, through the birth of my daughter, I've come to appreciate life in a way I didn't before, and having the opportunity to watch her learn and grow has been one of the greatest highlights of my life so far. If someone had told me prior to getting pregnant what the whole experience would entail, I may not have done it. But that was before I met my little girl, and she changed everything. The risk isn't greater than the reward for me, and through careful and thoughtful discussions with my physician and my husband, I know that it's a path I'd love to go down again with eyes wide open.

More Like This
How To Tell Your In-Laws You’re Pregnant
30 Marvelous Baby Boy Names That Start With “M”
Dr. Jill Biden Just Delivered Some Frank, But Powerful, Advice On Motherhood
Reddit Applauds Mom Of Five Who Stood Her Ground & Left Sleeping Dad Behind