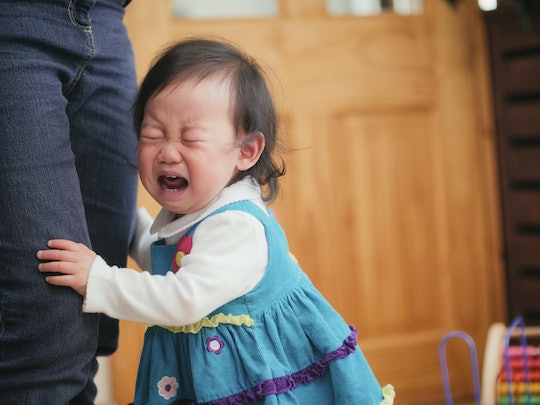 Even if your children are tiny, angelic humans, you are only one dropped light-up-sneaker away from becoming the focus of a "Target temper tantrum" compilation on YouTube. Before having kids, I was one of those people who would see that screaming child and hopeless mother and think, “WTF, why can’t she control her child,” or “Ugh, get a handle on your kid.” How stupid of me to think I was somehow above those moms. Maybe that’s why my biggest fear is being on the receiving end of a snarky stare or a rude comment about my inability to keep my kids under control in public. My daughters, 2 and 4, are learning how to deal with everyday disappointments like not getting to eat fruit leathers for breakfast and not being allowed to do handstands on the Target outdoor settee. And when they don’t get their way, they voice their discontent — loudly.

I will do anything — anything — to avoid a tantrum in a public space. The minute I sense my girls are going to throw a tanty, I’ll move them to another area of the store, remind them that they need to behave, distract them, use the mom voice and death stare, or just leave the store, like, "We can just get groceries next week and use baby wipes as toilet paper until then! Cancel supermarket trip!" I know that my girls are good kids and that my husband and I are good parents, but the thought of other people — especially other moms — questioning my parenting bothers me. Yes, I care what other people think, even if I'm trying to cultivate a little more "essence of DGAF" in my every day.

The Experiment: Spend A Week In Tanty Town

I believe in supporting our kids and helping them develop ways to express their emotions, but compensating for their behavior myself seems like a problem. I am doing my best, and parents aren't always able to micromanage their children's emotions — nor should we have to. Experts stress that temper tantrums are a normal and healthy part of development. That's why I decided to try going five days without intervening when my daughters threw a tantrum in public.

Day One: At The Library

I love going to the library with my girls. However, my girls have a short attention span for walking through the stacks. I was able to pick a few books before they started getting antsy and pulling books off shelves. I got the hint and got them over to the children’s section, where they thumbed through books and played on the computers. Then it was time to go home, and I had push back from the girls because they were having fun. I asked them to please get in the stroller so we could go home and have dinner, to which my 4 year old made a face but acquiesced.

My youngest daughter crossed her arms, shook her head and said no. I knew a tantrum was coming so I took a few deep breaths, reminded myself that I was not to blame for the dance of her emotions, and told her, “Okay, it’s time to go, let’s walk please.” I started to walk toward the door. She was saying, "No, I want to stay!" but once I started walking she ran after me. Other kids were looking at my daughter, but the adults and librarians didn’t even glance over. If only every adult acted this way when kids threw tantrums.

Every time I take the girls on a Target run, I leave the store saying "never again." They feed off one another and all it takes is just one of them to start misbehaving to mire the other one in mischief. This was one of those trips. It got off to a rocky start, with both girls not wanting to sit in a shopping cart and whining as I strapped them in. Both girls were trying to touch clothes, food, anything on the shelves as I walked through the aisles, ignoring my repeated requests to not touch. I should have known better than to try and pick out their shoes for our family photo during this trip. But in my defense: unicorn shoes!

I picked out some cute unicorn boots for them to try. My intention was to slip the shoes on their feet as they sat in the cart, but I really needed to have my older daughter try walking in them. That meant my youngest wanted out of the cart as well. Once they were both out and stomping around in their unicorn boots, the bolts that hold the world upright began to come loose. They started pulling other shoes off the shelves and “trying” to put them on as I hurried behind them picking up the mess. I sensed impending oblivion and asked them to please go back to the cart so we could leave. The unicorn boots would have to stay — too hard to get on their feet.

My 4-year-old let me put her in the cart, but not my 2 year old. She was all in on this tantrum. She wanted the boots, she didn’t want to get in the cart, she wanted to walk. There were so many reasons my little girl was throwing a fit. Instead of micromanaging, grasping for something to ward off the tantrum, or rewarding the tantrum with extra attention, I just let her cry. And it was hard! Seemingly every other kid there was a model child.

I wanted to hide or pretend that I was not responsible for the little girl crying in the boot aisle. I was worried that other shoppers were judging me and my parenting abilities. Would someone film me? A fellow mom gave me a brief smile before leaving the aisle with her little girl and an employee just continued restocking shelves as my little one cried. When my daughter emerged on the far side of the little storm cloud, I swooped her into my arms, paid for our items, and got the heck out of Target.

Day Three: On The Play Date

My daughter was beyond exhausted and I already knew that she would be prone to tantrums and inconsolable. My girlfriend has never judged me but I was still worried about my daughter having a tantrum. The prophecy was self-fulfilling: she threw a tantrum because she wanted to play with the girls, then because she wanted juice, then because… well, I’m still not sure why. I never want my girls to think that their feelings do not matter, so I always ask them to take a breath and tell me what they are feeling and why they are crying. Sometimes I can help calm them down, but when I can’t I ask them to go to their rooms to take a break from whatever’s going on or hug them or walk to another room until they are ready to talk.

Without my interference, I learned my daughter’s tantrums swiftly transition from screaming and crying to coming to me for a hug or to be picked up. They are loud tantrums but also over quick. Much of the playdate was spent with me holding her while she rode her emotions over a mountain.

Day Four: At The Birthday Party

Birthday parties are typically one of the most reliable places to find kids melting down. My girls coast along for a little while on the excitement of having all their friends about and toys to lay with, but by the two-and-a-half hour mark they are tired, and that's when the meltdowns begin. On this given day, our daughter’s meltdown did not happen until cake time, which is the time that many parents call it a day, ferrying home loose bundles of tears and goodie bags.

My daughter was hangry, having only had few bites of pizza and a some raspberries. By the time we sang "happy birthday," she was whining and crying. Everything was bothering her and she was being rude to adults who were trying to make her happy by offering her balloons. Instead of apologizing for her behavior and offering up excuses, I just let it be. Weirdly, I didn’t receive any rude looks or comments from people at the party, which made me realize some people get it. They understand that kids get tired and throw tantrums, and it’s not a reflection on your intrinsic parenting abilities. My daughter settled down once cake was served, and then I got us out of there.

Our trip to Trader Joes would have gone smoothly if I had just walked directly from the plant section with our pumpkins to the cash register, but I, victim of the PSL, wanted to grab some pumpkin-bread mix. “I want to push a cart, mama,” my youngest told me, which got my oldest daughter asking for a cart, too. It would have been easy to give in and let them push a cart, but I knew that would mean devoting at least 20 minutes to walking around the store in a little road train of shopping carts, and the girls still needed dinner and a bath. “No, not today, we have to get home and eat dinner,” I told them. “Waaaah,” my eldest daughter whined, disappointed. But my 2 year old was not taking the response without a fight. “Nooooooo, I have to push it!” she screamed. When I told her no, the tears started.

Omgomgomg, ran though my mind but I reminded myself that the tantrum will end. This doesn’t mean that I was not embarrassed, especially since there were two older women who stopped shopping just to look at us. I didn’t even try to make eye contact with them, just kept my eyes on my little girl. When her sobs started to lessen, I asked her if she was ready to go home and eat and carve pumpkins. She nodded yes and we headed to the register.

What Is The Takeaway?

Learning not to be afraid of the tantrum was tough for someone like me, who is worried about being judged by others, but I learned a few things about myself. First of all, that I really need to stop worrying about other people’s perceptions of my parenting abilities, because these concerns affect my reactions to my children.

When you're on edge about walking into a store (every parent walking into Target ever), you are sending vibes to your kids, and they pick up on it. A confident mom sends a powerful message to your kids that everything is okay, and they can rely on that stability even when disaster strikes (they drop their squeeze pack in the parking lot). I learned that there is a difference between helping your little kids handle their emotions, and sacrificing your emotional bandwidth to help manage their mood. Our kids have every right to throw a fit every now and then — if anything, it's a healthy part of development.

Maybe the emotions that need wrangling are my own: I just need to do a better job at ignoring other peoples stares.

More Like This
Why You Should Go Ahead And Have That Fourth Baby
The Best Dressed Parents At The 2023 Grammy Awards
Adele’s Grammy-Nominated Album Features A Beautiful Song Written For Her Son Angelo
Marie Kondo Gives Up Tidying Post-Kids, Sparking Joy For Moms Everywhere
What Parents Are Talking About — Delivered Straight To Your Inbox