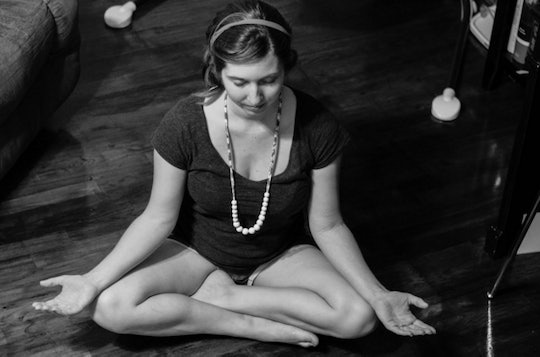 I Meditated Every Morning For A Week, & This Is What I Realized

I’ve been intrigued by the practice of meditation for years, but it always seemed out of reach for me. It seemed like something which required a tranquil setting: the top of a mountain, a picturesque beach at sunrise, a quiet monastery. I figured it was best reserved for buddhist monks or really "crunchy granola" hippies or Gwyneth Paltrow. It certainly didn’t seem like a practice that was plausible for a mother of three living in constant noise and chaos.

Still, I wondered if maybe meditation could help me deal with that constant chaos. I had noticed myself becoming impatient with my kids, and feeling exhausted halfway through my day. I felt like there was no moment of calm, no chance to catch my breath. Maybe, just maybe, meditation could help give me that pause and allow me to realign my day.

Even though I was skeptical, I figured it was worth a shot. So I challenged myself to meditate every morning for a week to see if I felt any different. I found a short guided meditation for mothers aimed at cleansing the chakras (which, for the record, was way “out there” for me). It was only six minutes long, so even if my early-rising daughter was up, I could easily distract her with food or Netflix while I focused on my meditation. If it didn’t work? I have easily wasted 42 minutes watching terrible television in the course of a day, let alone a week. The stakes were low, and well worth the reward if I ended up a calmer and happier mom.

I woke up on the first day feeling absolutely ready for my meditation challenge. Unfortunately, my daughter and husband were also awake and seemingly hellbent on disrupting my meditation. I feel like snapping, “Go away! I’m doing something weird for a work experiment!” halfway through my six minutes, but doing so was probably not the best start to my meditation journey. In addition to being interrupted, I felt totally weird about cleansing my chakras. I didn’t even know what a chakra was, to be honest. I found it super hard to focus. The calm voice guiding the meditation was no match for my incredibly loud 2-year-old daughter.

I definitely didn’t notice a change in my mood on day one. If anything, I was even more irritable because I felt like my meditation had been such a failure.

On day two, my daughter was once again awake and wondering what the hell I was doing. I told her I was meditating, which did not stop her from asking, “What are you doing, mama?” another million or so times. This morning I decided to try lying on the ground instead of sitting in lotus pose, and my daughter decided to lie next to me. She closed her eyes and began to fake snore, which, although distracting, was pretty adorable. It was also a lot quieter than the other noises she often makes, so I just rolled with it.

Day two I was in a slightly better mood, but I felt like it was probably because my day was less stressful. My daughter actually napped (perhaps the meditation helped her sleep?) and I didn’t have any big jobs to stress over.

Day three of my meditation challenge was the first day I actually got to listen to the entire guided meditation without interruption. I was joined on the couch by my cat, who is a quiet and excellent meditation partner. Focusing on my breathing and listening to the calm, gentle voice guiding the chakra cleansing relaxed me in a way I definitely hadn’t felt in days one and two.

I was really able to visualize my chakras, and by the time I got to the third eye and crown chakras I could feel something. I wasn’t sure what it was, but it finally felt like I was doing something right.

I definitely noticed a change in my mood on day three. I was much calmer and more relaxed throughout the day. I even had the energy to go for a run in the evening, when I would usually be sitting myself down for a big glass of wine and some mindless time on the internet.

On day four, I made sure I got up extra early to ensure I had another uninterrupted meditation session. I knew I had a big day ahead of me, toting all three of my children out to the beach for the day. My chakras would definitely need to be cleansed and ready for action (is that how chakras work? I’m still not totally sure).

The moment I left the bed, however, the baby woke up. He refused to be put down, and I knew I was running out of time before the other two woke up. So I decided to put the baby on my chest and meditate with him. It was, by far, the best meditation I had all week. Even better than cat meditation (which should be a thing, you guys). I felt super focused and calm. I was really able to visualize my chakras, and not feel like such a meditation fraud.

Our day at the beach was wild and fun, and way less stressful than I had imagined. The anxiety I normally feel when I’m out with all three kids was totally absent. Plus, I was totally namaste while the baby screamed most of the way home and my daughter smeared an entire squeezy fruit pouch all over herself like warpaint in the car.

I was totally exhausted the morning after our beach day, and definitely forgot to wake up early enough to meditate without the kids. I put on some Netflix and hoped for the best, but they would not give me any peace. My oldest eventually understood I was doing something, but my daughter wasn’t having it. She had seen enough of this meditation stuff, and six minutes of not being the center of attention was clearly unacceptable.

So after restarting my meditation three whole times, and feeling very not-namaste about the whole situation, I put her on timeout and completed my meditation to the distant sound of her yelling at me from behind her locked door.

At this point, I think the cumulative effort of meditating every morning must have started to rub off. Even though I had a pretty crappy, super interrupted meditation in the morning, I still felt relatively calm throughout the day. Was this weirdness actually working? I think it was.

On day six, I got a nice quiet meditation in before anyone was awake, mostly because I was up at the crack of dawn getting ready for the bridal shower I was co-hosting in the afternoon. I usually get super stressed out when I have a lot of baking projects to do, and this day was out of control. I was running way behind schedule, I kept messing up the sugar cookie favors, I had totally forgotten that on top of hosting I still needed to get the bride a gift, and the air-conditioning in the car wasn’t working well, so I was fairly certain all the cookies and cupcakes and cake would melt before I even got to the party.

Normally, a morning like this would make me cry, and snap at my family, and angrily shove all the ugly misshapen cookies into my mouth. Even though I still felt super frazzled and out of control, I managed to let it go and enjoy the day. The party was a total success, even though some of the cookies definitely did melt in the car. We just shoved those ones in a drawer and ate them post-party.

In the evening, I started recapping my experiment so far with my husband. “Oh, so that’s why you’ve been in such a good mood this week.” The results of my meditation week were actually becoming visible to others!

On the final day of my meditation challenge, my husband was around to shoo the kids out of the room so I was able to concentrate. I was starting to feel really good about my meditation. The awkwardness of the first few days had faded, and I felt like I had come into my own as far as this single-guided meditation was concerned.

We spent the day at the fair, which is always fun but usually stresses me out by the end. Especially with a baby, I could see this day going south in a hurry. My daughter was a raging mess from not sleeping the night before, and there was a lot of rush to leave our messy house (I hate leaving the house when it’s a mess). It got a bit too hot for the kids, they ate junk food, everyone wandered all over the place without a plan or meet-up place. It was the kind of day that would usually put me in a complain-y, horrible mood. Yet I loved every second of it.

I found that none of my usual triggers made me upset. I was the sort of easy-going mom I had always wanted to be. I let the day flow over me, and I knew the next morning I could cleanse any of the residual stress away.

Even though I was skeptical at first, I think meditating actually did make me happier. It didn’t feel like much when I was going through the guided meditation, but I noticed the change it made in my mood for the rest of the day.

I also realized my mood sets the tone for the rest of the family. If I have a strong calm, there tends to be less chaos. Or maybe there’s still the same amount of chaos, but that chaos doesn’t have to devolve into a yelling power struggle. I can let it go, and keep my cool, which is all I ever wanted from this.

So, will I keep up my meditation practice? Absolutely. Though I may start doing it in the evenings, when everyone is sleeping. Let those chakras stay nice and clean for the night, before the madness begins.