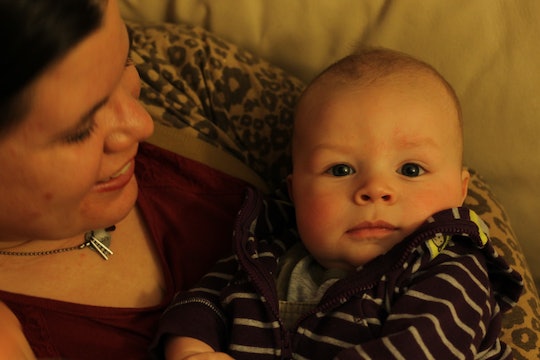 Basking in the afterglow from devouring every kind of pregnancy and baby book I could get my hands on when I was expecting my first baby five years ago, I felt prepared to pump milk when I returned to work after my baby's birth. It can't be that hard, I thought. So I registered at my baby shower for just a hand pump. I don't need that pricey electric pump, I reasoned. Needless to say, I was in for a surprise, not only about how challenging pumping breast milk could be, but especially how complicated pumping at work was. Going into it, I thought pumping at work would be a quick and easy break, one I'd take a few times a day. The truth was much more complicated than that. Because of that, I quit pumping at work and to be totally honest, I don't regret it at all.

When my son was born, I followed the advice I read about in all those baby care books and put him to my breast right after his birth. We got a good enough latch going, but my son lost more weight in the first few weeks than recommended. His pediatrician diagnosed him with a tongue tie, a condition in which a band of tissue (called a lingual frenulum) tethers the bottom front of a person's tongue to the floor of their mouth.

My son's tongue tie was likely playing a role in our breastfeeding difficulties. But still, we powered on. I pumped milk to try to increase my supply, and quickly realized I'd better invest in an electric pump. The hand pump was a good hand workout, but not terribly efficient at collecting milk. I scraped together all the gift cards from my shower I could muster and blew them all on a single electric pump.

I hooked myself up to the pump, fit the flanges over my over-sized, slightly sore nipples and turned the knob. The suction kicked in, along with the rhythmic beat I'd been waiting for. As I sat waiting for the milk to start flowing, the pump sounds turned from a catchy beat to a taunt. Finally, the milk started trickling into the waiting bottles. I watched those bottles like a movie, afraid if I blinked I'd miss something important. I sat, sat, and sat some more. All that pumping, and I had about a half ounce of milk per side. I was disappointed. I expected so much more.

Treating the milk like the liquid gold it was, I carefully poured one of the bottles into the other and screwed the cap on. I put it in the fridge. One ounce down, hundreds and hundreds more to go before I returned to work in just a few weeks. I longed to be like the women I'd read about on the baby boards who filled their freezers with bags of breast milk. The women who had such an abundant supply in spite of feeding their babies round the clock that they were able to donate milk to other mothers and babies in need of milk.

Soon enough, I started pumping in a smelly bathroom because there was a sink. More than once I watched, curses flying, as a (fortunately empty) bottle rolled away from me on the bathroom floor. The whole process was, simply put, a pain in the ass.

Soon enough, the time came to return to work. Sure, I only had managed to fill a few bags of milk in my freezer, but I was optimistic as I washed all those pesky little pumping pieces and bottles by hand an hauled my pumping equipment to the office. Breast milk was important, and I'd provide for my baby. My son was already taking some formula due to my supply issues, but I was committed to providing him with as much breast milk as possible. Good mothers breastfed and pumped when they were away from their babies, I tought, and I was a good mother.

By the time my son was 6 months, I stopped pumping altogether.

I also tried to be a good employee, though, and had to paddle fast to keep my head afloat back in the business world. My work designated an office to pump in as required by law, and I haphazardly put a piece of printer paper over the window in the door for privacy. There was no sink where I could wash my pumping equipment. Soon enough, I started pumping in a smelly bathroom because there was a sink. More than once I watched, curses flying, as a (fortunately empty) bottle rolled away from me on the bathroom floor. The whole process was, simply put, a pain in the ass.

I zipped my pumping equipment, including that pesky tubing that always trapped milk and mold in it, back into the milk-stained black bag it came in. I put it in the garage. And I breathed a sigh of relief.

I was busy, and often found it nearly impossible to stop my work flow multiple times a day to pump. There was no warm and cuddly suckling baby to encourage my milk flow, looking up at me with loving eyes. There was just cold plastic and that awful sound. The rhythm of doom. Yes, it was my legal right to pump at work and to have a place to pump at work, but that didn't make pumping convenient or even possible on some days. I was desperate to see my son and avoid pumping, and would often race the 15 minutes home on my lunch hour to nurse my son in person. I'd caress his soft little head and nuzzle his warm cheek. It was much, much better than a cold pump.

I started skipping pumping on days at work here and there. I'll do it tomorrow, I'd tell myself. And then I didn't. The guilt seeped in. Good moms pump, I reminded myself. Still, I skipped days. And then, when I did pump, I collected even less milk. By the time my son was 6 months, I stopped pumping altogether.

I zipped my pumping equipment, including that pesky tubing that always trapped milk and mold in it, back into the milk-stained black bag it came in. I put it in the garage. And I breathed a sigh of relief. Continuing to breastfeed my son when we were together came naturally to me. I'd snuggle with him in the morning before I left for work in my bed, savoring the closeness. I'd hurry home after work and take him in my arms, us giggling and smooching and nursing. I'd spend lazy weekends lounging around the house nursing him.

We supplemented with food and water and formula, and he was fine. He was better than fine. He was strong and healthy, and happy. And I was happy and stress-free. At work, I was able to focus more completely on my job. I continued to extended breastfeed my son until he was 14 months old and more than ready to give up the breast.

When my daughter arrived last year, I was determined to not let the mommy breastfeeding guilt eat me alive. I had to supplement with formula early on due to supply issues, and didn't worry about building up a massive freezer supply of milk. When I returned to work, I pumped as I was able to but didn't stress if I missed a session here and there.

I also stopped pumping at work when my daughter was about six months old, and have continued breastfeeding her when we are together, much like I did for her brother. She's now 11 months old and still happily nursing. But my pump is permanently retired in the garage, and it looks much better zipped up and put away. It's a now blissfully silent reminder that sometimes doing what we comfortably can as mothers is more than enough.