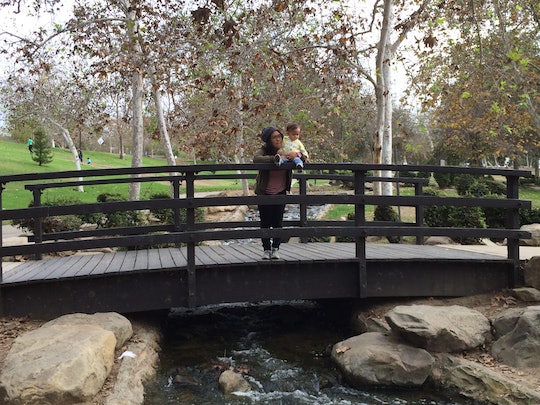 I Thought I Needed To Find Mom Friends, But I Was Wrong

I had my kid quite young in life, younger than the average woman, in fact. I was excited to embark on the journey of motherhood, but I knew that I was going to be the first among my friends to do so. My friends were equally excited on my behalf. I knew they were always going to have my back, but I also knew that motherhood would give me an opportunity to expand my social circles to include other parents. What I didn’t know was how I'd have such a difficult time establishing friendships with other women with children, and how parenthood would lead me to friendships I would have otherwise not made.

Like with any phase in life, I desired the company of people undergoing the same experience as me, namely other women with young children. Back in college, I seamlessly made friends by setting up study dates in coffeehouses. Study dates would organically go from grumbling over tough essay questions to divulging our dating lives. I made friends instantly. So when I found out I was going to be a mom, I envisioned myself talking with other women about the best nursing bra or teething rings. I thought friendships would come effortlessly as long as I showed up to places where parents congregate, like libraries or parks. But there’s something so different about making new friends as a first-time mom that was unsettling, almost even terrifying for me.

My partner and our brand new baby moved to a new, big city away from most of my family and friends because of my partner’s new job. My new occupation as a stay-at-home mom didn’t provide me with much social interaction aside from cooing and sush-ing a fussy baby. It was difficult trying to navigate the dizzying streets of Los Angeles with a baby in tow on top of figuring out motherhood with only two sources: my parents on speed dial and the vast Internet. I needed real human interaction.

So I reached out to friends I'd made through college and past workplaces that also happened to live in the city. We'd meet up for lunch or they'd come visit, and it felt refreshing to have real adult conversations, even if I had spit-up on my shirt. Somewhere amidst the catch-up chatter with whomever friend I was hanging out with, they would always pose the same exact question to me:

So, do you like, hang out and have play dates with other moms during the day?

Although well intentioned, this question always put me on edge. I didn’t want to sound like a straight-up loner, but the truth was, no, I didn’t hang out with other moms because I don’t know other moms and I don’t even know where to start looking. My friends had, without knowing it, reinforced this idea of what it’s like to be a stay-at-home mom and how I should be socializing with a specific cohort.

I subconsciously started to put pressure on myself to specifically make friends with moms. Just like how my partner makes friends at work, or children make friends in school, I somehow needed to make friends with women who were doing the exact same thing I was doing. It became a goal that I obsessed over, almost as important as teaching my kid how to say new words. I wanted so desperately to make friends with other women who had kids, not just to socialize, but to prove to my existing friends, and even to myself, that I can be a “normal mom” with “mom friends.”

I can’t even tell you how many times I’ve really hit it off with another mom at the playground or doctor’s office, talking about cool stuff on sale at Target, or mom hacks, only to exchange a quick goodbye without ever seeing them again. It felt just as uncomfortable as asking someone out on a date: you have a really cool conversation with someone you're attracted to who coincidentally appears to be single (or in my case, someone who also has young kids), and you linger awkwardly before parting ways without asking for their contact information. Exchanging numbers is nerve-racking, and actually contacting another person is even more frightening.

One weekend at brunch at a bustling marketplace, a fellow father struck up a conversation with my partner about the baby hiking backpack that was strapped on my partner’s back with our daughter in tow. The other father, like us, was a first-time parent and had plenty to say about fatherhood. His wife came along, and we all began to chat about babies and how messy and fun they are. They seemed really laid-back and were very honest about how little they knew about parenting. I wanted so badly to become their friends.

We exchanged numbers, and they said they would invite us to dinner or a play date sometime soon. My partner and I played it cool, but as soon as we walked out of earshot we couldn’t stop giggling in excitement. For the very first time, we felt like we met people we could really connect with who also happened to be parents. We were about to become friends! With other parents!

We waited for something like two days (or whatever the standard is for new dating relationships) before mustering up the courage to text them. We sent them a super casual message in hopes they would respond: “Hey, it was great meeting you all! Let us know when you’re free and we can set up a play date or something. :)” They didn’t respond that night, but it was late anyways and we were sure they were exhausted caring for their baby, so we didn’t think anything of it. Three days passed, and still no response.

I don’t think my low count on mom-specific friendships makes me any less of a good mom, or a socially inept one at that.

It stung a bit, pretty much like any rejection would. My partner and I concocted stories in our heads, like maybe they lost their phone and all their contacts? Or maybe they forgot who we were? Or, worse, perhaps we were too over-eager and it was off-putting to them? Whatever happened, I admittedly had a hard time getting over it.

I grew self-conscious about making friends with other people on the basis of having kids, and I shut down for a while. I continued to go to parks, libraries, and a children’s gym for my daughter, but I avoided making friends at all costs. Sure, I’d engage in friendly small talk about the latest baby products on the market, but I’d say a quick goodbye before opening the idea of exchanging contact info with just about anyone. I formed a barrier of isolation to protect my naturally extroverted self from getting rejected.

After what seemed to be a month of not seeing any friends and definitely not making any new ones, I asked my partner the vulnerable question that had been lingering in my solitary head:

Do you think I’m a loser because I have no friends?

After a long pause, my partner very carefully responded, “Of course I don’t think you’re a loser. You have plenty of friends. I think you’re OK as long as you’re happy."

Then I thought to myself: I am mostly happy. The friends that I do have, although childless, love my kid as if they've been life-long pals (which is true in my daughter’s eyes). The only thing I was less pleased by was my reluctance to seek out new friendships.

I decided to rid myself of the pressure to fit into this false idea of a “normal mom” and forget about my quest to make mom-specific friends. Instead, I would cherish the friendships that I already have and let parenthood lead me to whatever and whoever was next.

And that’s when I actually started to make new friends.

Instead of just singling out other moms during children’s gym time, I talked to everyone. I smiled more, spoke with comfort, and opened up to the possibilities of friendship. I put myself out there without the obligation of putting myself out there. Turns out, I got along really well with a lot of the nannies during my daughter’s gym class — nannies who, although were clearly up to 20 years older than I am, have had decades of caring for other people’s kids on top of their own. I’ve also had amazing conversations with grandparents who’ve retired and now care for their grandchildren full-time. I found out that anyone can be great resource and friend, and that you just have to be open to it.

I still think mothers who befriend tons of women with kids are lucky — I’m sure they get great current advice on local schools and have super fun play dates. But I don’t think my low count on mom-specific friendships makes me any less of a good mom, or a socially inept one at that. Most women around me that are my age aren’t having kids just yet, and some women with kids don’t go to the same places I go at the same times I go because of work schedules.

I’m a 25-year-old stay-at-home mom living in a big city, so making friends with women who are just like me is a long shot. Though I don’t have a ton of female friends my age with young children, I’m OK with that. I’ve grown to adore and enjoy the company of caregivers who care for my daughter’s friends. My mother-in-law, who lives closer than my own parents, has become one of my greatest sources of comfort (and gossip). I’ve become more confident in my own abilities as a mother and as a person who models how to be kind and treat your friends and strangers well to my daughter.

The biggest lesson I’ve learned in navigating motherhood and new friendships is to make sure I don’t alienate myself in my experience as a parent. The point is to seek out people who will help me, comfort me, and even laugh with me about the difficulties in child-rearing, whether that be my kid’s gym coach or my elderly neighbors. In my lonely trenches of motherhood, I sought to find like-minded folks who could share the experience of childrearing with me. I envisioned these new friends to be other women with children, preferably young ladies with kids the same age as mine, but the reality is, they come in all forms, and finding them has been fantastic.

More Like This
Sex And Mom Guilt: When I Date Someone New, Am I Cheating On My Kids?
No Sex Drive? Here's Why & What Might Help
Turn Heads This Halloween With These Sexy Costumes
Dr. Jill Biden Just Delivered Some Frank, But Powerful, Advice On Motherhood