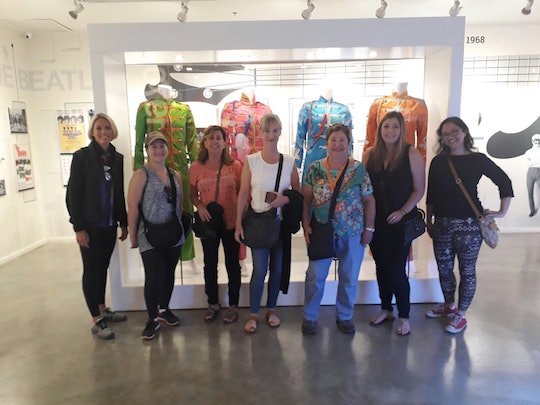 I Traveled Around The World With Other Moms & Here's Why You Should, Too

A few months ago, I got invited to go explore Israel for a week. It was a trip for family travel writers, and when I saw I would be traveling with a group of moms, I hate to say my dormant biases came out. I’m a relatively new mom, and part of me still mourns my former party-girl life. So when I got the invitation, I hesitated. What would it be like to explore areas of the world with just moms? As it turns out, traveling with a group of moms is the best thing ever.

Arriving in Tel-Aviv, I was beyond exhausted. Between the 15 or so hours on multiple planes, and the intense jet lag, I was ready to collapse. I was one of the first three from our group to arrive, and while I was all set to go nap in my room, another mom in the group was already looking to explore. I was surprised at first. How would anyone not want to immediately go sleep in a comfy hotel bed? That’s when I remembered: oh yeah, us moms are hella resilient. So I bucked up, and we all went to the Carmel market to try some local treats. When we finally did have some downtime later that afternoon, I was actually the only mom who didn’t hit the Center Chic Hotel rooftop happy hour. Clearly, I knew I was already misjudging the hell out of other traveling moms. The trip was filled with lots of moments like this, where I realized that having moms around was, at least for me, way better than not having any moms around.

We spent a hefty amount of time on a bus — from the country’s modern metropolis to the tranquil Dead Sea to the sunny Negev Desert and later to the Holy Land of Jerusalem — yet we never ran out of topics of conversation. Moreover, it was nice to be able to talk about our kids and our families, without judgement. I was kid-free once upon a time, and swore I’d remain so forever. I had zero interest in hearing about people’s kids or seeing their photos. So when I travel with mainly child-free folks, it often feels odd to bring up my kid when everyone else is showing off pictures of their pets or talking about club hopping or spin class or, you know, whatever people capable of enjoying eight hours of sleep every night spend their time doing.

But with a group of fellow moms traveling with me, I was excited to swap family photos and stories. I loved hearing about other mother’s kids and how old they are, what grade they’re in, what their hobbies are, and what silly thing they said last week. I enjoyed the anecdotes that come with all that, and the wisdom I heard from moms who have kids that are older than mine. Because I know they’ve been there. As moms, we often learn a lot about parenting from one another. Traveling with other mothers, I got to talk about my family and impart my knowledge while also absorbing the wisdom of others. It’s an exchange that doesn’t always happen in other groups.

The trip was filled with lots of moments like this, where I realized that having moms around was, at least for me, way better than not having any moms around.

There were other things, too, that make traveling with moms a wonderful experience. I feel like there’s an authentic bond that occurs when you’re with other people who have been through the same or similar things. Parenthood is certainly a common bond, and one that reminds you that it’s OK if you’re not looking like you just stepped out of a J.Crew catalog every single morning, and that it’s no big deal if you happened to forget an item, because moms are usually more than willing to share. Bathroom missing toilet paper? Don’t worry. There’s at least one mom with baby wipes or some napkins in her bag. Getting hungry during a tour of Old Jaffa? You bet one of us has some kind of snack on hand— and yes, we’re always willing to share. Feeling a little motion sick before a Bedouin camel ride? There might just be a mom nearby with dramamine or some other remedy to help. Mothers tend to overpack in case of emergencies, and while many of us might forget an item or two, one out of the group will always have whatever another member of the group needs.

Just prior to the trip, I’d injured my knee, which made it difficult to get around. I didn’t bring it up, but of course, but everyone on the trip noticed my limping around. Not a day went by that any one of them didn’t remember to ask me how my leg was doing, or offer me something for the pain. And when I had to bow out of a rappelling adventure in the Ramon crater, no one teased me or tried to pressure me to participate. Instead, I had a lovely chat about grief and hope with one of my fellow writers that remains one of my favorite moments of the entire trip.

I feel like there’s an authentic bond that occurs when you’re with other people who have been through the same or similar things.

Did you also know that moms are excellent listeners? We have years of practice providing emotional labor for our partners and children. When one of the moms in the group gave an account of her family struggles during a dinner in Jerusalem, no one tried to shift the conversation or move it in another direction. No one interrupted. No one judged her. We just, well, listened. We sipped our Israeli wine, we nodded in solidarity, and we were there, because that’s what we do. I’ve been with other groups of people where someone might try to actually get real about something, when suddenly three other people are staring at their phone. Hey, nothing against social media (I know I love it), but maybe save it for later?

On our last day in Jerusalem, one of the moms in our group suddenly became ill. It was a long day of walks across the old city, exploring the Western Wall tunnels and the Via Dolorosa. It was already an emotionally impactful day for many of us, but I know it was harder for our friend, who was incredibly exhausted. Like any mom, she hung in there and didn’t complain for a second. But we all took turns walking behind with her, sitting with her when she needed a break, making sure that she was always included, and ensuring her that she didn’t need to feel as though she was holding back the group. And when we got back to Herod’s (our hotel in Tel-Aviv), we made sure to keep asking if she needed anything (food, medicine, whatever), because that’s the kind of thing that moms do. We spend years looking after others, and that habit bleeds into not just how we care for our kids, but for our friends and colleagues as well.

Moms tend to get a bad rap in our society. The word mom invokes the idea of someone who will both care for you and also expect more of you; of someone who will set boundaries and who maybe won’t know how to “have fun.” But that's not who we really are. Mothers are incredibly diverse, but we’re also strong, selfless, and kind. Yes, we do very often take on the role of caretaker, but we’re just as apt to be the first one suggesting a nightcap (which happened more often than not), or bonding over art (like I did with one mom at the Ai Weiwei exhibit in the Israel Museum), or willing to splash around with you in the Mediterranean sea. Maybe it’s because I’m older, or because I’m a mom myself, but traveling with moms proved to be way more fun than traveling without moms. If you ever get the chance yourself, check your judgements at the door, and don’t forget your passport.