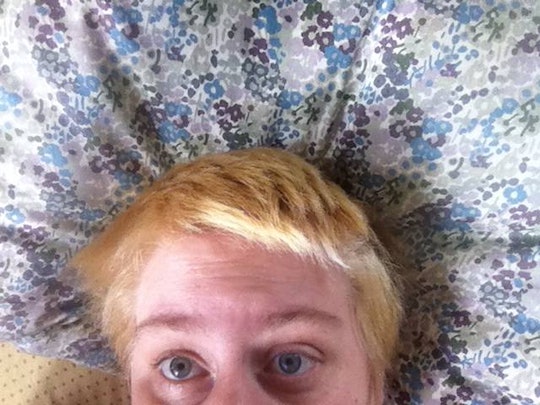 I Was Fat-Shamed For My Postpartum Weight By My Pediatrician

Before my son was born last year, I was a fat woman. And after my son was born, it turned out I was still a fat woman. None of that surprised me. What did surprise me (even though maybe it shouldn’t have), however, was how much license other people felt to discuss the size and shape of my body simply because I was choosing to reproduce. Pregnancy and childbirth can be vulnerable times for many, and they certainly were for me. And yet, this is a time when our culture’s bizarre relationship with weight often gets more intense. On some level, I knew all of that. But all of the knowing in the world couldn’t prepare me for what it felt like to be fat-shamed for the size of my postpartum body. And not only was I shamed for being too fat right after having a baby, it came from someone who really ought to have known better.

Of course, being a fat woman, fat shaming was not new to me. What surprised me, though, and hurt deeply, was the total lack of compassion for how hard the postpartum period was on me. Women are expected to not only recover from birth incredibly quickly, we’re also expected to lose weight immediately so as to be a more socially acceptable size. I guess I'd imagined that there might be more compassion. I guess I thought that, even by the logic of a deeply fat-phobic and fat-antagonistic society, people would understand that the months immediately following childbirth might not be the best time to slim down. But I was totally wrong.

In fact, I remember the moment perfectly. My wife and I were with our son at a routine doctor’s appointment. It was our last appointment with a baby's doctor we had already decided our pediatrician wasn’t a good fit for us because of her outdated ideas about breastfeeding. We’d done the work of finding a new doctor for the baby, but decided to keep this one last appointment. I just wanted our kid to get his shots on time, and so I sat through her terrible advice on everything from breastfeeding to sleep training, telling myself that it didn’t matter. I told myself that nothing she said could touch me. We got through everything without incident, until the very end. Then it was time for her to update our son’s chart.

“Any changes in family history? That you know of?”

“OK so….” her eyes glanced down at the chart, “it looks like there’s not much, just that you have seasonal allergies…” It was at that point when she looked up at me and kind of smirked. There is one smile, that some people can do, in which they somehow manage to smile at you while simultaneously giving you the dirtiest look imaginable. This was that look, and it felt truly malicious. Her eyes quickly flicked up and down my frame in disgust. “....and, well, some problems with your weight.” Then she looked right into my eyes, looking almost amused.

Let me explain something: This was a doctor with whom I deeply disagreed, but up until this moment I did not actively dislike her. She'd taken care of my child through the first three months of his life, and for that I was grateful to her. And because she'd been seeing our kid all of that time, my wife and I had talked to her rather a lot. She knew about the difficult labor and birth that I endured. She had cared for our son through his short stint of jaundice, and she knew how important it was to me to breastfeed and how much I'd struggled to be able to do so. She knew that a week after my c-section, my c-section incision had become inflamed and infected and reopened. She knew that exactly four weeks after his birth, I needed had to have my gallbladder removed. She knew I was recovering from two surgeries, and that we were so poor we were staying with friends while we tried to get on our feet again with a newborn. And she'd tested me for postpartum depression, so she knew I was suffering from that as well, and that the antidepressants my OB-GYN put me on had taken their time kicking in.

In short, she knew I was busy, overwhelmed, and dealing with much more than anyone should ever have to. And while the specifics of my case were unique, that's often how the postpartum period goes for new parents. My body felt completely wrecked from the ordeals of pregnancy and birth, my hormones raged way out of balance, and at the same time I had to learn how to take care of a newborn and deal with sleep deprivation. It's hard, really hard, and that's even if nothing goes wrong. But lots and lots of times, things go wrong. In my case, they absolutely did.

And frankly, it sucked. Even if I was the type of person to diet or take on a new exercise regimen in an effort to alter my body (I’m not), saying that I had "problems with my weight" at my son's four-month appointment wasn't the time or the place to do that. To ask or expect a human being to shrink while coping with all of that I was going through was unimaginably cruel. And to be clear here, this woman knew nothing about who I was before becoming a mother. She didn’t know if the size I was, sitting in her office that day, was my norm or just where my weight had landed after having a baby. She didn't know anything about me beyond the fact that I'd had a baby. She didn't know me at all.

She had no idea if I had a history of “problems” with my weight at all. All she knew about me, in fact, was that I was four-months postpartum and had just had the most difficult four months of my life. And yet here she was, bringing up my weight (which she didn’t even know!) in this mean, passive aggressive, mocking sort of way.

My wife told me afterwards that she thought I was about to yell, and there aren’t really words to explain how hurt and angry I felt in that moment. I mean, medical fat-shaming is always a problem, but this was just such an extreme circumstance and she wasn’t even my doctor. She had no idea if I had a history of “problems” with my weight at all. All she knew about me, in fact, was that I was four-months postpartum and had just had the most difficult four months of my life. And yet here she was, bringing up my weight (which she didn’t even know!) in this mean, passive aggressive, mocking sort of way. Instead of yelling, I somehow managed to keep my cool, and I just smiled back at her. I tried to imagine that her assessment of my waistline somehow pleased me, and I grinned.

I imagine she isn’t used to that reaction. I imagine most doctors are used to the, “I know, I know, I really need to lose some weight…” type of response, as though fat people and postpartum mothers must apologizes because there's some moral imperative to be thin.

But there is no moral imperative of thinness, and I in fact do not need to lose weight. Nor is it any of that doctor’s business. More than anything else, I’m glad that I was strong enough to be angry, rather than wounded, on that day. It’s hard enough dealing with all of the fat stigma in this world, and it’s hard enough having a new baby. It just isn’t fair to be shamed for not magically losing weight in the throes of postpartum.