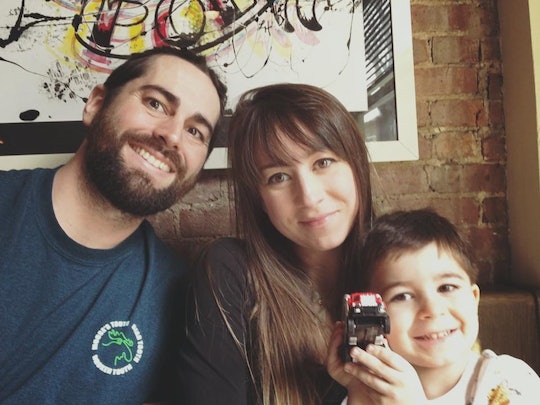 I Feel Guilty That My Kid’s Dad Is A Better Parent Than Me, & That’s Bullsh*t

I was scared, and he was sure. I was clueless, and he was well-researched. I was making mistakes, and he was picking up the pieces. From the moment I found out I was pregnant until just last night, when I threw my hands up in the air and left the always-exhausting bedtime routine our toddler cannot sleep without to my partner, I've realized how ill-equipped I am for motherhood. It isn't innate in me. It's not "natural." I am not a perfect parent in any way, shape, or form. But my partner is. He seems to have been made for parenthood while I seem to have been made to laughably fumble my way through it. I'm in the middle of potty training and temper tantrums and never-ending workloads and preschool registrations, wondering where the hell I am, and my son's father has some kind of built-in compass that allows him to navigate these hellscapes with relative ease.

I had been hearing about the mother/baby bond since time immemorial, and how this magical link was going to effortlessly equip me with the tools to care for my offspring. I was supposed to feel instantly connected to the "baby" I was growing inside my own body, and that connection would turn into love at first sight when I held that baby in my arms. That love would transcend any definition of love I'd known up until that moment, and carry me through sleep deprivation, breastfeeding issues, potty training, weaning, temper tantrums, and whatever else parenthood was going to throw my way.

It wasn't love at first sight when I held my son for the first time, because I also had to give birth to his would-have-been brother whose heart stopped beating at 19 weeks gestation. It took me a while to convince myself my son wasn't going to die too, so I didn't spend my first days as a mom lost in some blissful postpartum haze. I was too busy suffering from postpartum depression and enduring post traumatic stress disorder-related (PTSD) flashbacks and mentally and emotionally distancing myself from my baby in the hopes it would save me from inevitable heartache.

My partner, on the other hand, was present. He was there, in every conceivable way and regardless of whether or not he would get his heart shattered. He was calm during terrifying ultrasounds, didn't so much as blink during labor, was prepared for late-night feedings and diaper changes, and somehow knew how to give a newborn a bath. He kept track of our son's immunizations and followed his growth charts and never, ever, forgot to pack an extra pair of clothes in the goddamn diaper bag. He was in "the know," and that's where he has remained as we've tried to raise our son as best we can while simultaneously meeting the obligations of school, work, and finances. When I get frustrated because my son believes "no" is the only usable word in the English language, my partner has the patience to explain a decision to our son in an age-appropriate way that leaves him informed and willing to adhere to our rules. When I can't bring myself to look up preschools in our area, my partner has a list and is researching each district.

I wonder if societal expectations are impacting how I feel about my parenting when compared to my partner's.

A 2014 study published in the Proceedings of the National Academy of Sciences "found" that men can have just as strong a bond with their child as women can. In the study, the brains of parents were scanned while they watched videos of their interactions with children, and men who took on an equal or primary role in caregiving were found to have a similar emotional response to mothers. This isn't surprising to me. In fact, I consider it to be overwhelmingly insulting to fathers the world over. I know men can be just as capable of child-rearing as women can be. After all, I'm living it.

Still, I wonder if societal expectations are impacting how I feel about my parenting when compared to my partner's. Am I really as incapable as I think I am? Or has the bar been set so low for men — my lovely partner included — that I've been inundated with expectations that make his efforts look superhuman by comparison? Sixty percent of voters say motherhood changes a woman's life completely, but only 38 percent of voters say fatherhood changes a man's life completely, according to a recent study by PerryUndem. We, as a culture, have preconceived ideas of what motherhood and fatherhood actually mean, and rarely, if ever, do they mean the same thing for those who choose to enter them.

So, should I really be that flabbergasted, and that self-deprecating, in those moments when I am reminded that my partner is better suited to parent than I am? Or should I just consider his strengths and my struggles to be a manifestation of our unique personalities, qualities, and abilities? This is just one of his vitalities as a human being, after all, and one that I should celebrate instead of grow incessantly jealous of.

His father is his go-to parent; the one he looks for when he is hurt or sick or needs help.

Still, when my son calls for his father at bedtime or says he can't wait for daddy to come home from class, a part of me sinks. His father is his go-to parent; the one he looks for when he is hurt or sick or needs help; the reliable, consistent one who has the wherewithal to stay firm when he needs to be and compassionate and understanding when he should. Dad can "fix everything" and "knows all the answers" and takes him on adventures, because mom is at work or mom is working at home or mom really can't figure out that damn Transformers toy.

I never wanted to be a mother, so maybe I missed out on years of "practicing for the job." I didn't envision a bassinet; I envisioned book deals. Meanwhile, my partner has been looking forward to the role and, perhaps as a result, it seems more natural to him. Then again, maybe my family dynamic is just an example of what it would look like if we all threw gender stereotypes into the sea and simply allowed people the freedom to play to their strengths, be whoever the hell they want to be, and remain as involved in their children's lives as they desire, despite what it supposedly says about their perceived masculinity.

Or maybe I'm just a shitty parent, and my son is really, really lucky to have his dad in his life. Either way, I consider myself lucky to have my partner parenting with me. I might not be perfect, but together we are the perfect parents for our son.