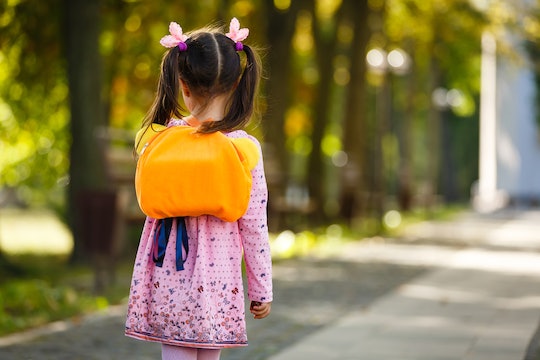 I'm Worried About My Daughter Going To School, But Not For The Reasons You Think

The conference we had with my 4 year old's preschool teacher went well, as we expected it to. It wasn't a "very special meeting" or anything; just a standard opportunity to chat about her progress. But by the end of an otherwise great and encouraging chat, I was just a little but worried about my daughter going to "big kid" school.

Something you should know about my child (whom I refer to as G): she's what you might call a "big personality," or "extra." She's enthusiastic, bubbly, and "if she has something on her mind she needs other people to hear it." That last part is a direct quote from G's teacher (Ms. M), but I can personally back it up because the other day she came into my bedroom at 4 a.m. to ask how many teeth a squirrel had before telling me "Well, probably they have two." (Apparently they have between 20 and 22, depending on the precise species: I looked it up later, at a more reasonable hour.) Another thing you should know is that she's thrived in school from day one. Maybe it's because she's been in a in a classroom setting at least a few days a week since she was 15 months old. Or maybe it's just that she sees school as a social opportunity, which speaks to her natural skill-set and preferences. Whatever the reason, when it comes to preschool, G's happy-go-lucky, generally agreeable, and open to new things.

But this is the conference, after years in "baby school," where we start talking about making the transition to kindergarten. Now *puts on Old Lady outfit* when I was a little girl, kindergarten was mostly playtime. But in recent years, the school system has made kindergarten more academically rigorous. Nowadays, kindergarten much more resembles what an '80s or "90s kid would recognize as a first grade classroom. So a lot of the prep-work that would have been accomplished in kindergarten — letter identification, counting, being able to sit still for two goddamn seconds — is the business of preschool. While I sort of wish things weren't that way, I've never been worried about this aspect of my little baby's ascent into academia. By the time she goes to her new school, (the amazing) Ms. M will have worked with her for two years. She's done a wonderful job making sure G's prepared.

But at this meeting, Ms. M brought up something I hadn't considered yet: would kindergarten be prepared for G?

"I wish I could hand-pick her teacher," she sighed. "Because G needs someone who understands her spirit. I don't want anyone who will try to tone her down in order to make her conform."

And then I realized: OMG. YES! THAT HAPPENS!

Many of us have seen the research. Over time, girls become (and are encouraged to be) less vocal in class than their male peers, as a study conducted by Trinity Western University found. The National Bureau of Economic Research discovered that girls find themselves discouraged from certain subjects, according to the New York Times. By high school, girls are more likely to downplay their intelligence in order to be "more likable," according to research from SUNY's Educational Psychology department.

I know this is the world we exist in, because I've spent decades existing in it myself. But I forgot, perhaps as a matter of self-preservation, that so too does my daughter. And around kindergarten I will have to allow her to become more immersed in it, away from me and my protection and control. And mostly I'm excited about that: It gives her a wider range of experience in which to explore her identity and meet new people and learn new things and hear new perspectives. She'll learn and grow and develop interests that probably wouldn't have happened if I'd kept her in The Mommy Bubble for the rest of her life. But sometimes that outside influence can be scary: mean kids, dangerous situations, and teachers who may, despite their best efforts, be full of biases that do not value an outspoken girl.

And guys: I get that my child is not going to be the only child in her classroom. She cannot (and should not) be catered to and coddled and be allowed to do whatever the hell she wants when there's an overworked, underpaid teacher trying to get a classroom of 20 5 year olds through challenging curricula. Indeed, there's great value in learning how to take a step back and listen and be part of a group instead of insisting everyone stop what they're doing to tell you how many teeth a squirrel has. That's just part of learning to be a decent human. But since that meeting I've worried about how teaching her to be a decent human will be balanced against recognizing her individual humanity.

For too long, our expectations of how girls should behave and be out in the world has robbed them of important aspects of who they are. The concept of femaleness has been so small it has not sufficiently been able to fit all of us inside of it. But rather than expand what it means to be female, much of society has demanded that those of us who are deemed "too much" should shrink ourselves to fit. And if we can't shrink ourselves then we're told — tacitly or overtly — to remove anything that won't fit within the determined parameters of being a girl.

I consider my family lucky: within our school district, I have encountered only wonderful educators and administrators. I'm optimistic that G will wind up with a kindergarten teacher who respects her "extra-ness" as a quality to be honed rather than quashed and who wants to see her shine... but the sudden realization that I'm coming upon a time when I'll have to hand over my child to the world in a way that I really haven't before his given me yet another thing to worry about. Still, I'm glad I'm worried, because that means I'll be on my toes in reassuring my daughter "You're not too much — you're just right. Rock on."