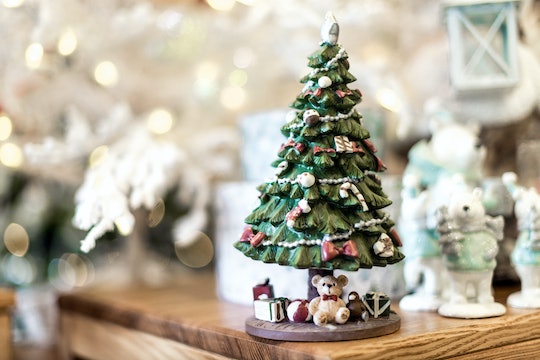 In Defense Of The Fake Christmas Tree

Every year, I find myself on the receiving end of a long-winded, smug rant about how someone could never, ever subject their home to the shame and indignity of a fake Christmas tree. Again. The way some people talk about it, you'd think someone suggested skipping gift-giving in lieu of stealing presents from an orphanage. "It's just not Christmasy!" the insist. "I mean... plastic?! That's not a tree! That's blasphemy." But, ever the contrarian, I would like to speak in defense of fake Christmas trees. You know, the ones that cannot speak for themselves. I'm like the fake tree Lorax.

I would like to begin by saying something to the real tree people: I get it, dudes. I'm a New Englander. Now, the New Englanders reading this know implicitly what that simple sentence means, but for those of you not from the cozy northeast corner of the country, allow me to elaborate. Here in New England, there's a few things you should know. Clam chowder (real clam chowder, not that Manhattan nonsense) and Dunkin Donuts coffee flow through our veins. We hate nothing more than getting stuck behind an out-of-state plate on a back road in the Autumn because they are inevitably a leaf peeper who will go 10 miles below the speed limit. Oh, and we invented the quintessential American Christmas. I'm not sorry and I'm not backing down: you can fight me on this one. Just think of any charming Christmas town scene pretty much ever. Quaint old buildings and sturdy folk cozy around a central, snow-covered town green. Yeah, that's New England. It's a place where stereotypical depictions are, somehow, less charmingly stereotypical than the real thing. And when it comes to Christmas trees, only fresh-cut will do. There are lots of reasons to go for a real tree, too. I mean, it's fun to take a family outing to a local business to find "the perfect" tree and, perhaps counter-intuitively, it's better for the environment than a fake tree (unless you re-use your fake one for about 20 years).

But aside from those perks, and I will admit that the "green factor" is a big one, this little Nutmegger (yeah, that's what people from Connecticut actually call themselves because, again, we ooze cozy adorableness) has to break with tradition. I have a fake tree, and I stand by that decision even under the seething glare of my fellow New Englanders.

For my primary reason for not getting a real tree, allow me to present you with a gif impression of me between the months of September to June:

After 34 years of impeccable health, the Universe looked at its ledger and said, "Hmmm, that's weird. She should have been sick a lot more than this. Well, we'll just load her up now by making her violently allergic to basically everything." Nature went from being something I cherished and enjoyed to something that desperately wants to kill me. My sinuses swell shut, I cough my way to (two!) broken ribs, and I break out into hives that look like a particularly egregious case of leprosy. I developed asthma for God's sake. I did not know that was something one could develop, but, LOL! I guess you can! So much fun!

I have a fake tree, and I stand by that decision even under the seething glare of my fellow New Englanders.

Now, I have not been officially diagnosed as being allergic to pine trees or a particular variety of pine, but it is something people are allergic to. My mom, for example, had an awful reaction one year to a particularly lovely blue spruce. After the hell that has been the past year of my life (allergen-wise, that is) it's also not something I'm going to find out only after chopping it down and hauling it into my house. For one, I don't want to needlessly kill a perfectly nice tree. And two, what am I? Made of money? A goddamn Vanderbilt? No thanks.

Speaking of which, let's talk about cost. My artificial tree cost $99. I expect it will last me 10 years, give or take. In that same time frame, I could easily spend $500 on real trees. More, in fact, if I were to get trees the same height and fullness as the fake I picked up in the store. And you know what, guys? Christmas is expensive enough. Between gifts for the kids, holiday parties, outfits for holiday parties, and other assorted holiday decor, food, and paraphernalia, this is already a decidedly prodigal time of year. Now, I'm tremendously fortunate in that $50 isn't going to make or break my family's financial situation, but every little bit we can save is helpful. So being able to put a bit more upfront to save in the long-run is a good option for us.

"But you can always tell a real tree from a fake!" some may say. And, back in the day, I'd agree with you. My own family made the switch from artificial to real in the early-'90s when we all agreed that our artificial tree looked like a bunch of green pipe-cleaners shoddily assembled into something vaguely resembling a pine tree. We knew all the tinsel in the world wasn't going to change that. But over the years, fake tree technology has improved. Generally, these days, you cannot tell a real tree from a fake from across the room. Often you can't discern a difference until you take a close look at the branches. Sometimes it takes touching it and, in rare cases, you genuinely don't know until someone tells you where they got it. So the whole "they look better" argument has sort of fallen by the wayside in recent years. I even put it to you that, depending on the look your going for, an artificial tree is going to be more aesthetically pleasing.

But over the years, fake tree technology has improved. Generally, these days, you cannot tell a real tree from a fake from across the room.

Unlike real trees, which are formed in nature and don't particularly GAF about bald spots, symmetry, or supporting heirloom decorations, artificial trees are made specifically to look as perfect as possible. You're not going to have to turn one side to the wall because it's a little bare in the middle or whatnot. Any side is going to be just right. Now, granted, some people don't like trees that are too perfect and like a little bit of controlled chaos, but let's be really honest here: which trees on a tree lot or farm go first? The scraggly uneven ones? Or the full, symmetrical, stereotypically Christmas-tree looking ones?

It's nothing to be ashamed of, guys. People are naturally attracted to order and symmetry. You're not a sellout: you're human.

Speaking of humanity, do you know what else I'm attracted to, as a human woman with a lot on her plate? Not having to work to keep another goddamn thing in my house clean and keep alive. Between my children, husband, and a finicky but very beautiful orchid that was given to me as a gift, I feel like I'm all set on that front. Look, as far as living things go, Christmas trees are fairly low-maintenance, but that doesn't mean no maintenance. Between shedding pine needles, sap-y messes, and having to regularly water the thing (usually by crawling on your hands and knees under the sharp pointy branches), a real tree has a lot of associated issues I don't care to deal with. What's the trade-off for all that? The smell of pine? I have a candle that provides the same service, thank you very much.

After all, it's not really the tree that's important, but the people who gather around it.

Again friends, and especially those of you angrily gathering around my front door with pitchforks: I get it. Real trees are lovely, and so too are the traditions and environmental benefits that go along with them. But those of us who go artificial have a sound set of reasons for doing so.

After all, it's not really the tree that's important, but the people who gather around it. So whatever side of the treeline you come down on, I implore you: do not let this be a divisive issue this holiday season. Instead, let us all to come together in the spirit of what really matters: confronting your least favorite uncle about his horrifying politics and inane conspiracy theories, because OMFG, Larry! We heard you at Thanksgiving and you were wrong then. You are not going to do this every goddamn holiday. Enough!