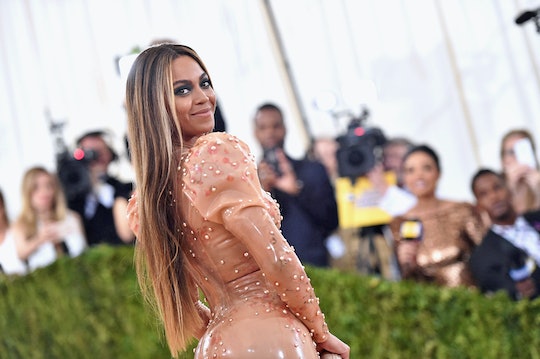 Is The Illuminati A Cult? Beyonce Critics Think She's A Member

Illuminati conspiracy theories have long followed Beyoncé and other artists. The never-ending theories, with racist and sexist undertones, have been presented in the form of YouTube videos, websites, online forums, and I'm sure, through heavily-debated discussions at friends' houses. The Queen Bey notably addressed the "mess" or crazed illuminati theories, in her single, "Formation," declaring, "Ya'll haters corny with that illuminati mess." Her lyrics in "Formation" featured on Lemonade either resonated with people who have been totally puzzled or disinterested (hello?) in the illuminati-conspiracy-theory craze, or, it sparked a few eye rolls from those who remain convinced that the illuminati is real, and Beyoncé is really in it. So according to all of the varying messages and opinions out there, is the consensus that the illuminati is a cult?

Apparently, Beyoncé critics and illuminati-conspiracy enthusiasts are convinced it's an active group, and that she's a member. But what does that say about our society? Can a black woman not achieve mega success without conspiracy?

The history of the "illuminati" dates back to 1776. It was a secret society that was formed in Bavaria, as a subset of the Freemasons, with the goal to abolish established monarchies. But as current illuminati conspiracies have it, despite research by historians that found the illuminati ended in 1785, it is still a working cult-like group that consists of satanists, or, you know, celebrities like Beyoncé, Jay Z, Lady Gaga, Whitney Houston and Kanye West.

The theories have credited the illuminati to tragic celebrity deaths or "sacrifices", and have pointed out supposed innuendos that reference illuminati-like symbols in music videos, like an oldie but goodie that exposed the "Crazy in Love" video for its ritual of Bey's rebirth as an evil soul. The illuminati enthusiasts have been quite committed to backing up their claims, but arguably, they assert that black artists like Beyoncé and Jay Z only have the illuminati to thank for their success. How else would they achieve such "power?"

Whether you're a fan of West's music, comments, or occasional Twitter rants, in an interview with Paper Magazine, he pretty accurately called out Illuminati conspiracy theorists for what they seemed to be forgetting:

I heard a comment — a joke — about the Tidal press conference being an Illuminati moment. If there was actually an Illuminati, it would be more like the energy companies. Not celebrities that gave their life to music and who are pinpointed as decoys for people who really run the world. I'm tired of people pinpointing musicians as the Illuminati. That's ridiculous. We don't run anything; We're celebrities. We're the face of brands. We have to compromise what we say in lyrics so we don't lose money on a contract.

Focusing on illuminati or cult-like conspiracy theories takes away from the hard work and talent of artists, particularly artists of color who have had to overcome barriers in the entertainment industry. And not to mention, it distracts from actual present-day (again, historians have it that the illuminati ended centuries ago) racist and sexist systems – or, as Ye asserted "people who really run the world." Definitely food for thought.