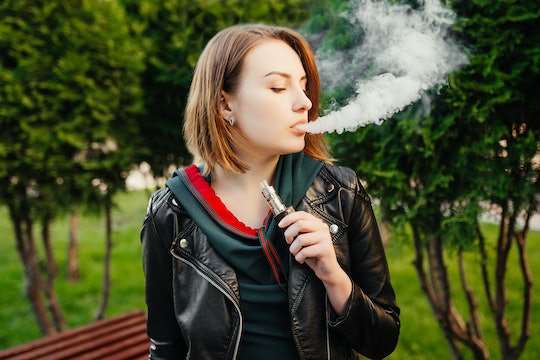 What Experts Want You To Know About Vaping During Pregnancy

Smoking during pregnancy. It's one of the no-nos that, unlike a glass of wine or eating Brie, comes with zero debate. No doctor will tell you that just a little won't hurt and a simple internet search will provide you with a scary list of reasons why. But what about smoking alternatives? Is vaping during pregnancy safe? Some women wonder if vape pens are a safe way to help quit smoking and others are simply curious if it's OK to use throughout pregnancy.

"Nicotine causes irreversible changes to the fetal brain that can manifest in childhood and adulthood as memory, attention, and behavioral problems," Renee Hartsook, who holds a PhD in Pharmacology and Toxicology and is a trained inhalation toxicologist, tells Romper in an email interview. "Nicotine aside, the 'smoke' from an e-cigarette is composed of chemicals that everyone is quick to declare as safe — 'it’s found in food!' — without understanding that what is safe to ingest is not necessarily safe to heat to high temperatures and inhale."

Hartsook points at one specific misconception about e-cigarettes — they do contain nicotine, as well as "a laundry list of chemicals that are proven harmful," similar to those in regular cigarettes, according to the Cancer Prevention and Treatment Fund. E- cigarettes are also relatively new in the United States, so it's impossible to pinpoint what health issues they may cause. (And with so many sources claiming they're safe, it's just as easy to be confused.)

According to the Centers for Disease Control and Prevention (CDC), although the aerosol of e-cigarettes generally has fewer harmful substances than cigarette smoke, e-cigarettes and other products containing nicotine are not safe to use during pregnancy. Some of the health risks associated with nicotine use during pregnancy include miscarriage, stillbirth, Sudden Infant Death Syndrome (SIDS), and a higher risk of birth defects, including decreased brain development.

"Electronic cigarettes are poorly regulated and the nicotine dose and other ingredients vary," Beth Conover, a genetic counselor and pediatric nurse practitioner who established the Nebraska chapter of MotherToBaby, tells Romper in an email interview. "There are no published studies regarding use of electronic cigarettes in human pregnancy and the impact on the baby. Studies on nicotine exposure to pregnant laboratory animals find reduced fetal growth, which is suspected to be due to decreased blood flow to the uterus."

But can vaping be used as a means for quitting smoking? According to WebMD, there is no evidence any e-cigarette is safe and effective at helping smokers quit. Safer alternatives for pregnant mothers to quit smoking include creating a "quit plan" and finding safer ways to relieve stress, like deep breathing and meditation, noted What To Expect.

If you are still trying to conceive and can't seem to kick the habit, then it's crucial to begin the process of quitting. Experts say smoking during conception may affect different stages of reproduction, including hormone production and embryo transport. Smoking may also diminish the quality and quantity of the eggs. If you live in a state where marijuana is legal for recreational and medical use, you can go ahead and count that out, too. Like smoking while trying to conceive, using cannabis can affect your menstrual cycle and quality of egg production, noted Baby Center.

It's also important to keep in mind that, while the road to quitting won't be easy, you aren't alone. Even though many women report struggling to quit in order to start a family, they all end up discovering the same thing when they do give it up for good: It's the best thing they ever did — for themselves and their growing babies.

More Like This
Pelvic Pain During Pregnancy: What Causes It & How To Deal With It
Yes, It’s Possible To Get Pregnant If You Have An IUD
Is It Good For Babies To Be Exposed To Germs? It’s Complicated
Here’s Why Your Vagina Itches At Night, According To Experts