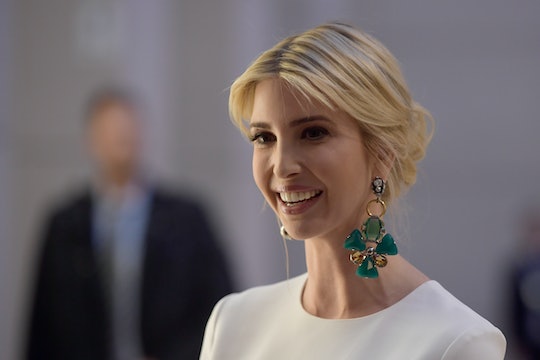 What Ivanka Trump Gets Wrong About Abortion

Since I was 15 years old, I have relied on Planned Parenthood to provide me with a wide variety of health care services. Like millions of other women, I've used Planned Parenthood to gain access to necessary contraception, STD testing, cancer screenings, pregnancy tests, counseling for sexual assault, and, yes, abortion. Which is why I was incensed when I read a New York Times profile on First Daughter Ivanka Trump, which made reference to a proposal she made regarding the future of Planned Parenthood.

According to the Times, Trump met with Planned Parenthood president Cecile Richards in April. During the meeting, Trump proposed that Planned Parenthood should be "split in two," with a "smaller arm to provide abortions and a larger one devoted to women's health services." White House officials have since described Ivanka's proposal as an attempt to "find a common-sense solution" to the "issue of abortion," as well as the federal funding Planned Parenthood is in danger of losing as a result of the GOP's ongoing assault on women's health care.

Yet the proposal is far from a pragmatic solution to the reproductive rights debate. Ivanka Trump's suggestion that Planned Parenthood's abortion services be offered separately from reproductive health care services further stigmatizes a necessary (not to mention legal and constitutionally protected) medical procedure. It also demonstrates how little she understands about not only the mission of Planned Parenthood, but the centrality of the abortion debate to the discussion of women's health issues. Planned Parenthood officials apparently agree: according to New York Magazine, they considered Trump's proposal "naive," and Dawn Laguens, Executive Vice President Of Planned Parenthood Federation of America, has since released the following statement:

Since federal funds already do not pay for abortions, any proposal that Planned Parenthood must ‘split’ into separate providers is about creating barriers to the full range of reproductive health care. Importantly, it suggests Planned Parenthood health centers should be treated differently than hundreds of other health care facilities that are reimbursed by Medicaid for preventive health care services and which also perform abortion services.

Asking Planned Parenthood to abandon our patients in need of safe abortion care in order to preserve our ability to provide cancer screenings and birth control is not a ‘common-sense’ idea. It is exactly what anti-women’s health activists have been pushing for years as part of their goal to outlaw abortion entirely.

As a woman who has walked through a Planned Parenthood clinic's doors for a pap smear, birth control, a lump on my breast that turned out to be a clogged duct, STD testing and counseling after I was sexually assaulted in college, two pregnancy tests, a referral to an OB-GYN that specializes in high-risk pregnancies, and, yes, an abortion, I feel obligated to take Planned Parenthood's criticism one step further. Ivanka's proposal, in the name of some perceived "middle ground" in the abortion debate, isn't just a highlight of her ignorance. It's dangerous.

Separating abortion care from women's health care puts women at continued risk by injecting a moral ideology into a choice that women have the constitutional right to make. It implicitly suggests that abortions are inherently "bad," as are the women who seek them out, further stigmatizing a common medical procedure that gives women agency over their own lives and their own bodies.

Ivanka's proposal, in the name of some perceived "middle ground" in the abortion debate, isn't just a highlight of her ignorance. It's dangerous.

When a powerful figure like Ivanka Trump perpetuates the idea that a medical procedure like abortion is taboo, women's lives are inevitably put at risk. For example, in 2015, the Texas Policy Evaluation Project (TxPEP) released a study reporting that an estimated 100,000 to 240,000 women of reproductive age in Texas (which has placed stringent restrictions on abortion access) have attempted a self-induced abortion at some point in their lives. Such statistics reflect the devastating reality that both lack of access to and the cultural stigma surrounding abortion put women's lives in jeopardy.

While it's not totally clear what Ivanka's proposal would have entailed, separating Planned Parenthood's abortion providers from other reproductive health care providers would, at the very least, pose an enormous inconvenience to women. When I had my abortion at 23 years old, I went to a Planned Parenthood clinic in liberal Washington state, where I was able to also get STD testing, a pap smear, and a prescription to a year's worth of birth control within a matter of hours. Unlike many women seeking abortions in red states, there was no mandatory waiting period I had to endure and no mandatory counseling I had to sit through; nor did I need to drive a great distance to receive the care I needed.

To add an undue burden to women by separating abortion care from their general health care, is to deny women their freedom to choose.

I can't imagine driving to a separate clinic to receive a pap smear or testing prior to having an abortion. I can't imagine driving to another clinic to receive birth control pills or, say, an IUD implant, after having an abortion. Is that, truly, Ivanka's vision for Planned Parenthoods of the future? Splitting Planned Parenthood clinics across the country into two separate locations, discouraging women from getting necessary abortions or seeking medical help in the rare event that she requires follow-up care after getting an abortion? What if they can't afford the cost of travel, or the cost of childcare?

Abortion providers are already under siege as it is. According to Bloomberg, at least 162 abortion providers have shut down or stopped offering the procedure since 2011, while just 21 new providers have opened. That means one abortion provider every two weeks closed their doors, making it more difficult for a reported 30 million women in 35 states to receive reproductive care. The average cost of an abortion at Planned Parenthood is $600, a flat rate for any medical abortion performed before 9 weeks gestation, which includes a follow-up appointment and a birth control method. While $600 might not be considered a significant amount of money to some, it is to the reported 16.9 million women living in poverty, according to U.S. Census Bureau data released in 2016. It is to the women who live in West Virginia, Mississippi, Missouri, North Dakota, and South Dakota, who only have one abortion clinic in their respective states and, as a result, have to travel large distances to acquire the care they need. It is to the women who live in Kentucky, the first state to have zero abortion clinics, who will have to travel to a separate state to receive reproductive health care.

To add an undue burden to women by separating abortion care from their general health care, is to deny women their freedom to choose. A woman like Ivanka Trump, with incredible privilege and endless financial freedom, will always have access to abortion services, should she need and/or choose it. Traveling to a "separate" Planned Parenthood would not inconvenience her in any way. But for so many other women, that separation is the difference between the future they envisioned for themselves, and a future they're being forced to endure.