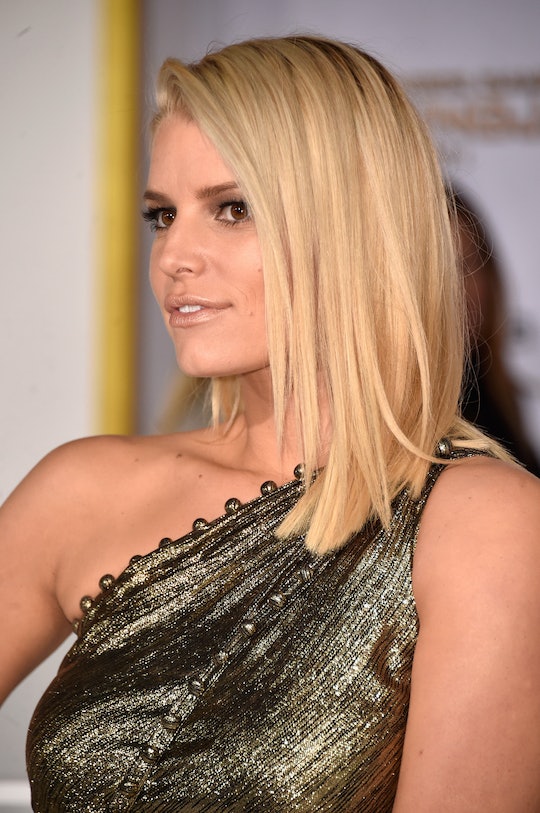 After a celeb announces their pregnancy, it's easy to totally go into overdrive trying to piece together hints that can tell us when they'll be welcoming their new babies. And this year, Jessica Simpson's pregnancy timeline makes it seem as though she's going to deliver soon, though it's really tough to say without a confirmation from Simpson herself.

In September of last year, the 38-year-old singer announced that she's expecting her third child, a daughter, with husband Eric Johnson. "SURPRISE!" she wrote on Instagram at the time. “This little baby girl will make us a family of five. We couldn’t be happier to announce this precious blessing of life.”

It's typical that celebrities wait at least three months until they share their pregnancy news (this is standard for most mothers, given that risk of miscarriage decreases significantly by the second trimester). However, this doesn't necessarily mean that Simpson was exactly three months along at the time of her announcement.

This means that it's most likely that Simpson is due sometime this winter, or at least mid-spring of 2019. Until she tells us for sure, it can be hard to determine, but either way, it's clear that her baby girl is coming soon.

In honor of Simpson's incredible journey, here's a timeline of her pregnancy so far, so you don't miss any of the cute photos, sweet posts, and excitement leading up to the birth of her new daughter.

On Sept. 18 of last year, Simpson first announced her pregnancy via Instagram with a photo that showed the black balloons her kids were holding popped open to reveal more, smaller pink balloons, indicating that she was pregnant with a girl.

"This little baby girl will make us a family of five. We couldn’t be happier to announce this precious blessing of life," she wrote in the caption.

Shortly after the reveal, Simpson posted her first bump photo: a shot of herself cradling her stomach, saying: "My baby love." Though she did not — and has still not — indicated exactly how far she is along, it's clear that she is at least out of her first trimester, given that she'd need to be to even know the sex in the first place.

The next month, Simpson posted a photo of herself and "one of her faves," Katy Perry at an event for the Fashion Footwear Association of New York.

Shortly afterwards, Simpson posted another photo of herself at the event with a body positive message, telling USA Today that she was tired of the judgment and speculation regarding her weight and body during pregnancy.

"My weight has always been something that people like to comment on. I've gotten used to it," she shared. "Nobody wants to talk about their weight. For me, I have had to come to a place where I am comfortable with myself. I'm a mom now, and get to be a role model for this beautiful little girl."

On Oct. 11, Simpson posted a photo of herself in a gown, pregnant with her third baby, and shared: "To me, beauty truly comes from within and when I feel good in my own skin, and the clothes that are covering that skin, I can project my best self."

Fans immediately responded with their warm wishes and words of encouragement. "Congrats on your pregnancy. You are amazing Jess!" read one response. "I love how you embrace pregnancy and motherhood you rock," said another.

Also in October, Simpson shared a hilarious, yet practical, tip for combatting her swollen feet while pregnant. "When you’re pregnant and have to ice your swollen feet before the flight...," she captioned the shot.

The day after Halloween on Nov. 1, 2018, Simpson shared a hilarious boomerang of her costume that embraced her bump is the best way ever. She and her hubby dressed as Arnold Schwarzenegger and Danny DeVito from 1988 movie Twins. "TWINNING," she captioned the post.

In December, Simpson shared a picture of herself, her husband and two kids, saying that her family is her "happy place."

The same month, Simpson uploaded photos of herself and her family having a "snow day" party at her house, featuring actual faux snow that she had set up in her California backyard. (Yeah, she's already the coolest mom.)

Finally, Simpson posted a "top 9" photo from the year, saying that she's most excited to not have to "waddle" anymore in 2019.

And once she's done waddling, it's clear that she's going to savor every moment of new motherhood with her baby girl. After all, Simpson previously told Us Weekly that it's an incredible experience for her. “Being a mother is the best opportunity and challenge I’ve ever been blessed with in life,” she said. “Right now my kids are in this amazing stage where I’m really listening to them without judgment and they’re teaching me so much. These little innocent kids teach me so much about life.”

Though it's not exactly known when Simpson will welcome her third baby, we do know that she and the rest of her family are really looking forward to the newest addition.