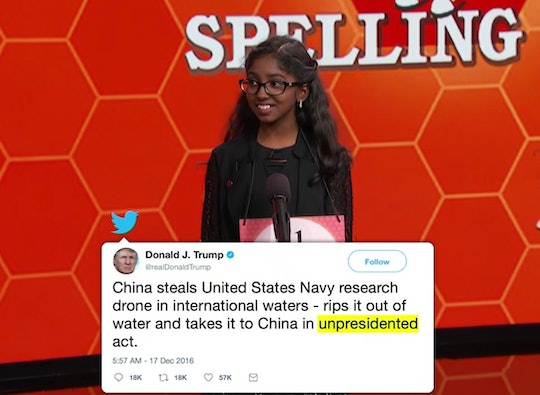 Jimmy Kimmel Quizzed Kids To See If They Could Spell Trump's Twitter Typos & Well, They Tried

Considering how often President Donald Trump tweets, you can't blame him for having a spelling error here and there... except this actually happens quite often. The frequency of typos is even more puzzling because, as president, he has a large arsenal of people working for him who he could easily proofread all of his tweets — something he clearly doesn't employ all too often. Jimmy Kimmel Live! recently decided to poke fun at Trump's affinity for Twitter typos by having host Jimmy Kimmel quiz kids on Trump's spelling in a segment called the "Make America Grate Again Spelling Bee," and it's pretty dang funny.

On Monday night's episode of Jimmy Kimmel Live!, three Los Angeles-based spelling bee winners competed to try and spell words the way Trump has. There was Vaishnavi, a 6th grader, Samuel, a 4th grader, and Amira, a 5th grader. "You're all familiar with spelling bees, but this is not an ordinary spelling bee," Kimmel told the contestants. "This spelling bee is presidential, which means you'll be asked to spell the words I give you — not the way the liberal leftist dictionary spells them — but rather the way our president does. President Donald Jesus Trump," he jokingly added.

He then explained that each student would get $100 for each correctly (aka incorrectly) spelled word. Pretty sweet deal.

The three kids each got a chance to spell two words, all six of which Kimmel used in a sentence — and by sentence, I mean he read aloud the tweets in which Trump incorrectly spelled the word. And because the contestants are all such good spellers, they had some difficulty guessing how Trump might have misspelled each word, for the most part.

They tried and failed to spell honered, tapp, rediculous, waite, and politicions the same way that Trump did in his tweets. (I have to add that I'm not used to having so many words underlined in red when I write articles, because unlike the POTUS, I proofread my work, so looking at this document is starting to seriously stress me out.)

Vaishnavi was the only competitor able to correctly guess one of Trump's misspellings — she spelled "unpresidented" the same way as President Trump (or, should I say, Precedent Trump), clinching her a $100 bill and a trophy that read, "2018 Presidential Spelling Bee Champeon." But the other contestants did not go home empty handed. Samuel was awarded an Ivanka Trump women's faux-leather jacket, and Amira won a set of Trump wine glasses. Two totally appropriate gifts for elementary school children.

Trump has made headlines for spelling and grammatical errors on so many occasions that one can't help but wonder if he's doing it on purpose. Perhaps he does for the media attention, perhaps it's to distract from more troubling news about him, or perhaps he has too much pride to ask someone to proofread his work.

Either way, some of his Twitter mistakes have gone massively viral — who could forget Covfefe? In May 2017, Trump tweeted the following nonsensical sentence: "Despite the constant negative press covfefe." The tweet remained live for longer than it should have, and the memes flowed for days afterwards.

Additionally, after the first presidential debate between Trump and the other Republican hopefuls, Trump drew a lot of media attention for tweeting multiple spelling errors. He tweeted that it was a “great honer!” to win debate polls, and he called Marco Rubio a "leightweight chocker," as reported by the Washington Post.

Evidently, Trump's aides are allegedly not happy with their boss' Twitter habits. A few days before the election, The New York Times reported that Trump's aides had temporarily taken away his Twitter privileges — though they've clearly given up since then.