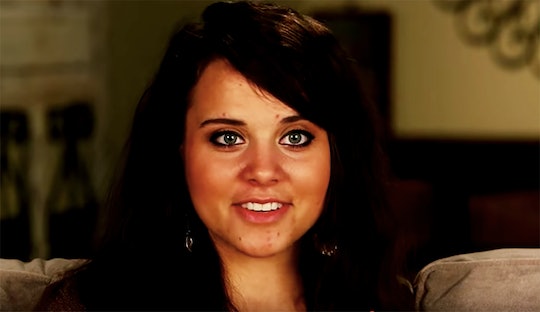 Jinger Duggar Addresses Rumors About Her Baby’s Sex, & Fans Might Be Disappointed

Ever since Jinger Duggar announced her first pregnancy in January, Counting On sleuths have been hard at work analyzing her posts on Instagram. From the color chalk Jinger uses in her pregnancy updates to how she's carrying her bump in photos, her investigative sleuths have left no stone unturned. But does Jinger actually know the sex of her baby? Unfortunately, Jinger Duggar's response to speculation about her baby's sex will probably let some of her eagle-eyed fans down.

About a month after Jinger revealed the exciting baby news, she took to Instagram on Feb. 17 to share an update about her growing baby. In the cute post, Jinger stands in front of a chalkboard that reads: "18 weeks. Baby is the size of bell pepper." Seems like a fairly innocuous message, right? As most people familiar with the Duggars already know, it's not uncommon for the family members to compare their developing fetuses to food items. In Duggarland, this type of update is par for the course.

But if you're a grade-A sleuth, the post is anything but innocent. Following the update, many fans pointed out that Jinger used *blue* chalk to write the word baby.

"Baby was written in blue but I really hope you guys have a baby girl! Tell us when you feel comfortable," one fan wrote.

"She wrote baby in BLUE," someone else added.

Another person chimed in: "Everyone’s guessing it’s a girl, but I can’t help but notice the use of blue chalk @jingervuolo (assuming you have found out the gender & plan to share the news)... Prayers for a smooth pregnancy!"

So, were fans correct about Jinger possibly sending a low-key message about her baby's sex?

Well, the answer is probably... no. “No … I don’t know the gender,” Jinger explained when she was asked about Blue Chalk-gate, according to Us Weekly. “I just happened to use blue chalk that day and everyone automatically jumps to conclusions and it had nothing to do with that. The gender has not been known and so it’s like, we just put blue chalk on that and everyone thought, ‘Ah, I know what she’s having now.’”

I don't know about you guys, but I felt a wave of relief wash over me when Jinger admitted that she doesn't know the sex. By Jinger acknowledging that she's in the dark about the baby's sex, it will hopefully inspire all of her inquisitive fans to take a break with all the guessing — something I'm personally looking forward to. All the fan theories (and there are a lot) can get a bit overwhelming, especially when there's already enough emphasis placed on the social construct of gender. Jinger, just like any other parent out there, deserves to enjoy her pregnancy in peace.

Plus, Jinger and her husband, Jeremy Vuolo, aren't hyperfocused on their baby's sex.

When Jinger was asked about whether Vuolo wants a boy or a girl, she responded, according to AOL:

Jeremy is so happy. He’s just so excited that he’s gonna be a dad at this point. He’s just really, really excited either way, whatever the baby is, he’s just so thrilled to be a dad.

At this time, the only thing Jinger is preoccupied about is whether she'll give birth to a "10-pounder."

“I thought, ‘Oh my. What if I have a 10-pounder?' Jinger said in reference to Joy-Anna Duggar giving birth to a 10-pound Gideon in February, according to Us Weekly. "That’s probably the only thing that makes me nervous … just thinking of the size of the baby and going through labor."

Yep, that sounds like a totally legit concern to me.

Of course, there will probably be plenty of fans out there who won't take Jinger's gentle hint that there's no point in trying to guess her baby's sex. Still, it's comforting to know that Jinger's admission will probably silence a few of her inquisitive fans, and it's a safe bet she's looking forward to this newfound peace and quiet.