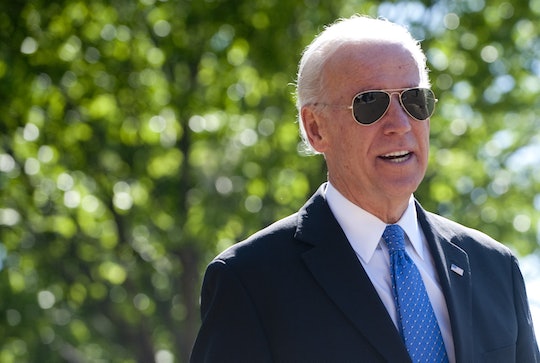 The outgoing vice president of the United States has a reputation as a jokester; He's famous not only for his half-century of public service but for inadvertently letting f-bombs slip on live TV and even saying he'd like to take now-President-elect Donald Trump "behind the gym" — presumably for a fistfight — if they were both in high school, following the release of a video in which Trump could be heart joking about groping women. But even the sometimes rambunctious, off-the-cuff Biden thinks it's time for Trump to grow up, as he told PBS NewsHour's Judy Woodruff in an interview to be aired Thursday evening. Addressing the real estate mogul, who in just two weeks will become the most powerful person in the world, Biden implored him to "show us what you have" in terms of leadership and policymaking.

In the interview, Woodruff asked Biden to comment on Trump's frequent frenzied use of Twitter, referring specifically to a tweet he sent just that day calling Senate Minority Leader Chuck Schumer "head clown" and another in which he accused President Obama of impeding his transition with "inflammatory" statements and employed a very '90s Wayne's World reference: "NOT!"

"Grow up, Donald. Grow up," Biden answered, smiling. "Time to be an adult. You've got to do something. Show us what you have. You're going to propose legislation. We're going to get to debate it. Let the public decide. Let them vote in Congress. Let's see what happens." ‌

In response to a popular spate of memes that populated social media shortly after Trump unexpectedly secured the presidency, the internet rejoiced in the depiction of a mischievous Biden planning pranks and other shenanigans to mess with Trump and Vice President-elect Mike Pence when they assumed office, as a more reserved Obama worked to reel him in. But in real life, it's clear that Biden takes the office of the presidency very, very seriously, and that he deems it crucial that Obama's successor realize the impact his every decision has on so many people.

Trump, for his part, has shown no indication that he'll display more restraint on his communication platform of choice. On Twitter, he's recently openly and cavalierly discussed the nation's nuclear capabilities, as well as repeatedly telegraphed his insecurity about having lost the popular vote to Democratic opponent Hillary Clinton and incessantly vented his objections to the Saturday Night Live portrayal of him by actor Alec Baldwin. And, in a move that's of particular concern to Joe Biden, as he says in the interview, Trump has used the platform to attempt to discredit the 17 United States intelligence agencies that agree that Russian president Vladimir Putin was involved in the country's interference in the election and that those efforts were aimed at getting Trump into the White House.

"For a President not to have confidence in, not to be prepared to listen to the myriad of intelligence agencies from defense intelligence, to the CIA, et cetera, is absolutely mindless," Biden said during the PBS NewsHour. "It's just mindless."

Unfortunately for Biden, Trump is will soon govern along with a Republican-controlled House and Senate, meaning that when the soon-to-be president decides to make policy changes, they'll likely undercut Obama's legacy. For example, Republicans are planning on initiating the repeal process on the president's signature health care law, the Affordable Care Act.

It's a move with which the vice president vigorously disagrees — and he disapproves of Trump's methods and antics possibly just as much.