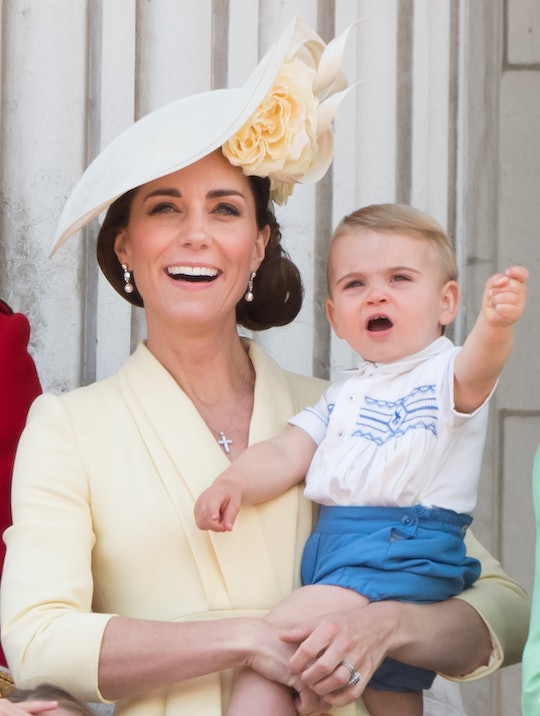 Keeping up with their grand lockdown tradition, Prince William and Kate Middleton baked cupcakes with their kids recently. Now, the Duchess of Cambridge might be known as a seriously healthy eater, but she's also a mom who clearly appreciates spending time baking with her kids, which is no small feat, considering she's working with 2-year-old Prince Louis. We all remember what his "Instagram vs. Reality" finger painting photo from his birthday looked like, don't we?

The Duke and Duchess of Cambridge recently shared a photo of some lovely cupcakes they baked for veterans at the Royal British Legion, decorated with little poppies in honor of Remembrance Day. The photo featured a plate of red and white cupcakes and the message that these delectable goodies had been baked by the whole family. "The Duke and Duchess of Cambridge and their family have shown their support for our Poppy Appeal this year by baking poppy cakes! These delicious cakes were delivered to residents at our care home in Norfolk," the caption read.

This means that 7-year-old Prince George, 5-year-old Princess Charlotte, and their 2-year-old brother Prince Louis got in on the baking action. Which could explain why there are only 11 cupcakes instead of the regular dozen. I'm not pointing any fingers, but my money is on Prince Louis sneaking a cupcake. Because toddlers are just like that.

Middleton's kids are not new to baking with their parents, particularly after spending time at their country home in Norfolk county during lockdown due to the pandemic. Prince William admitted in June that the family have "done a lot of baking at home" and that "chocolate goes down very well." And of course, Middleton told renowned British baker Mary Berry during A Berry Royal Christmas special in December that she loves working in the kitchen with her kids, according to the BBC. "Yes, I really enjoy it. Again, for them to be creative, for them to try and be as independent as possible with it," she said at the time.

So much so, in fact, that little Prince Louis loved working in the kitchen so much it inspired one of his first words, "One of Louis' first words was Mary, because right at his height are all my cooking books in the kitchen bookshelf," Middleton revealed during A Berry Royal Christmas.

Baking cupcakes for veterans was a lovely way for the Cambridge family to honor their sacrifices. And if one of the royal kids managed to snag that mystery missing cupcake, who could blame them?