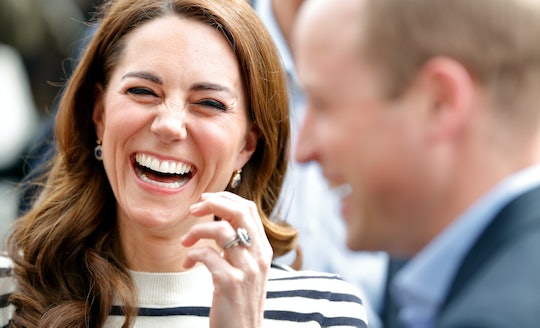 Kate Middleton is married to the man who will presumably someday be King of England. She's the granddaughter-in-law of the Queen. Her life feels somewhat different from the rest of the world, except for the fact that, according to her husband, Middleton is a "huge" fan of a reality TV show that's quite popular on the other side of the pond.

The Duke of Cambridge was on hand at a charity gala on Wednesday night when he met up with two of the judges from the popular BBC One program, Strictly Come Dancing. For those who might not know the show, it's a dancing competition program where celebrities team up with professional choreographers to compete in ballroom and Latin dance competitions. Essentially the British version of Dancing With The Stars. The show is currently in its eighth season and it's a huge hit in the United Kingdom, including one royal fan in particular.

As Prince William told Strictly Come Dancing host Claudia Winkleman and judge Shirley Ballas, according to Metro, he might not be a massive fan of the show himself but his wife certainly happens to be: "I have watched the show a couple of times… Catherine is a huge fan."

Middleton's love of a reality dance competition show is not entirely surprising. After all, she did prove she has considerable dancing skills during a 2012 visit to Southeast Asia.

Being a fan of reality TV is actually not Middleton's only nod to being a regular mom. In early November, she reportedly joined other moms from her children's school, Thomas's Battersea in London, for a low-key night at the pub. She was also spotted shopping for kids' Halloween costumes in a British chain store called Sainsbury's, which is sort of like Target.

Chilling out with reality TV, shopping at chain stores, meeting other school moms for a quick drink, apart from that royal business (and her incredible hair), Kate Middleton is basically just like the rest of us.